The fire broke out near Willow Glen Drive and Hillsdale Road in the Rancho San Diego area near El Cajon after 10 p.m. on Wednesday and was contained on Thursday. 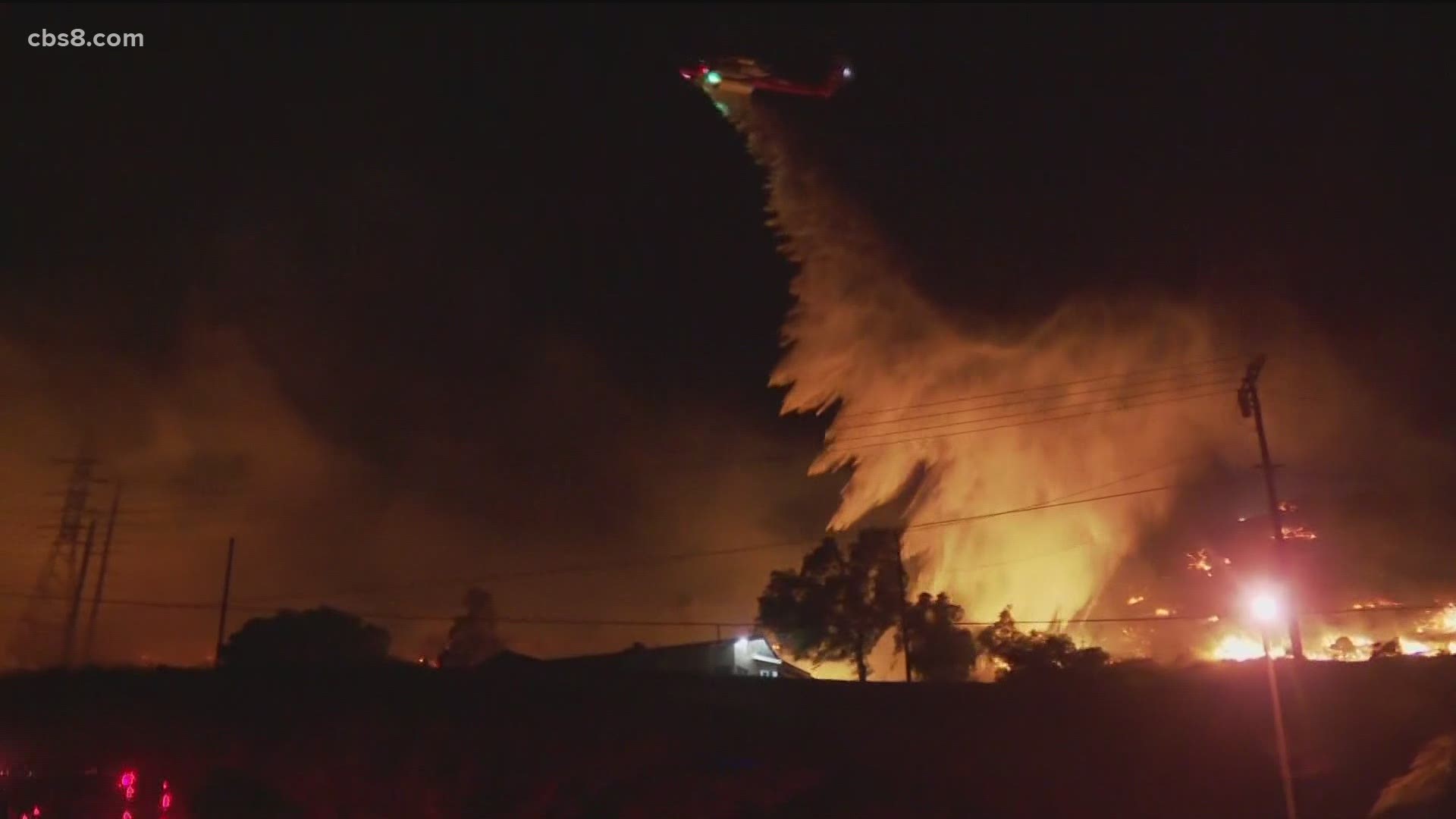 Evacuation Orders: All have been lifted as of 3:45 a.m.

Road Closures: All roads have been reopened

Firefighters working to douse remaining hot spots at the site of a wind-whipped brush fire that destroyed one home and damaged six others in a neighborhood near El Cajon had the 30-acre burn area fully contained early Thursday evening.

The non-injury blaze erupted for unknown reasons next to a home in the 2800 block of Willow Glen Drive in Rancho San Diego about 10 p.m. Wednesday, according to Cal Fire.

Driven by strong, arid Santa Ana winds, the flames raced up to the top of an adjacent hill, where they gutted a residence and damaged six others, said Cal Fire Capt. Thomas Shoots.

Sheriff's deputies cleared residents out of houses on more than a dozen surrounding streets as ground and airborne crews battled the blaze, dubbed the Willow Fire.

Firefighters had the spread of the blaze halted by shortly before 1:30 a.m. Thursday.

Despite the dry, gusty conditions, the personnel were able to get a handle on the fire because it was "boxed in" by residential streets, Shoots said.

The cause of the blaze was under investigation.

#WillowFire in Rancho San Diego [final] Fire is now 100% contained. One engine to remain on scene in patrol status.

Have you registered your mobile number for reverse 9-11? Take 5 minutes to visit https://t.co/GwVaVvbuK3 and select Alert San Diego to register your number today!

At a news conference for reporters, a Cal Fire spokesperson said the fire has burned 30 acres but it is now 50% contained.

According to CalFire, all evacuation orders have been lifted.

CalFire reports that the Willow Fire in Rancho San Diego Fire’s spread has been stopped. 25 acres, 5% containment, one structure destroyed. Resources will be committed into the morning.

According to CalFire, the Willow Fire is still actively burning but is generally holding at 15 acres.

The Temporary Evacuation Point has been moved to the McGrath Family YMCA at 12006 Campo Road.  This is next to the Regal Edwards Rancho San Diego Cinemas.  @SoCal_RedCross will be on hand to provide assistance at the location. 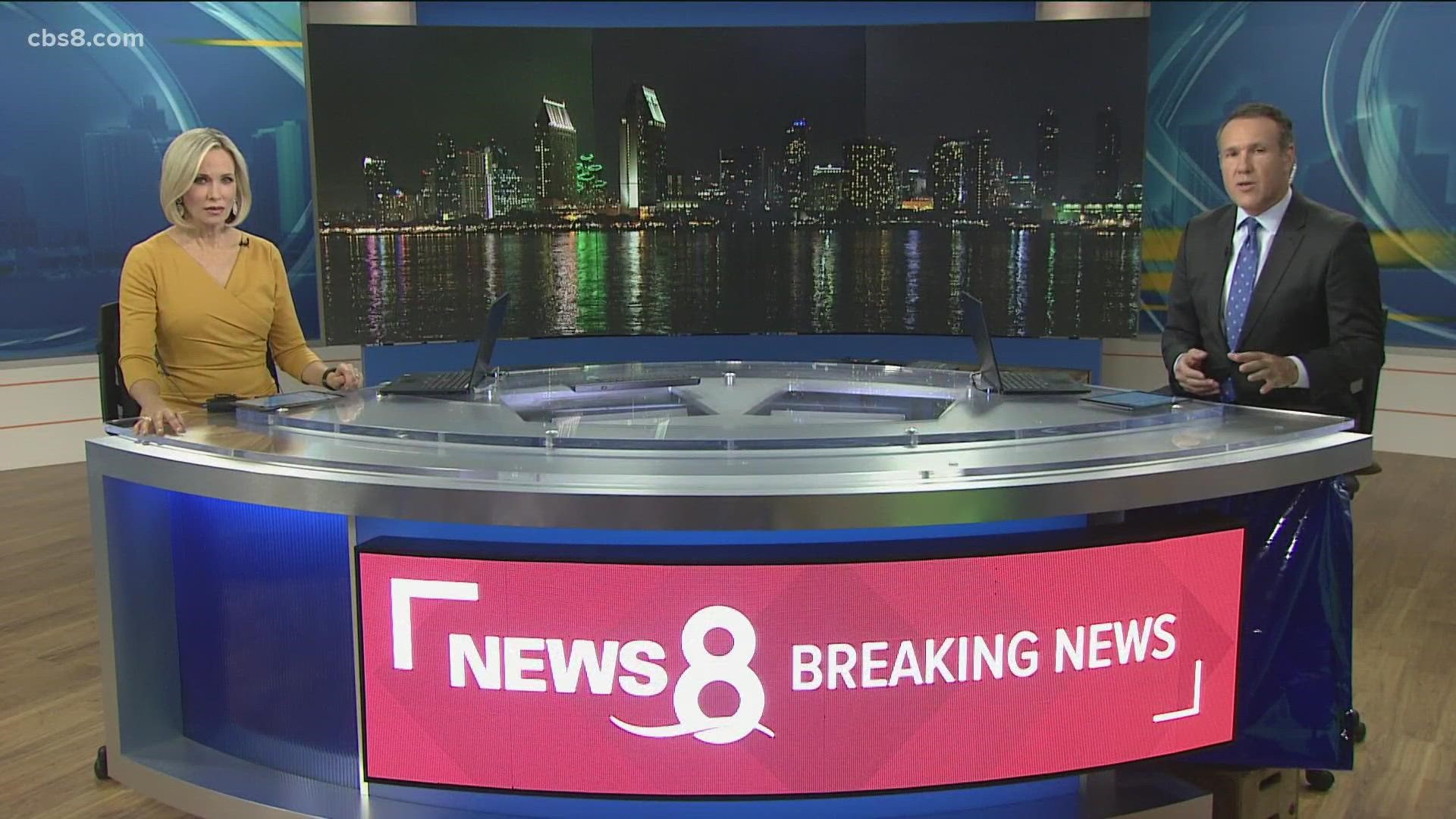 Firefighters are on the scene of a brush fire in El Cajon Wednesday night into Thursday morning. Just before 11 p.m. Cal Fire tweeted that the Willow Fire had burned 10 to 15 acres and was threatening structures.

Deputies are making door to door notifications in the 2800 block of Wind River Road and Sawgrass Street. For your safety, follow the evacuation notification according to the San Diego County Sheriff's Department.

The fire started near Willow Glen Drive and Hillsdale Road in Rancho San Diego near the Cottonwood Golf Course after 10 p.m. Wednesday and was initially described as rapid spread with light to moderate flash fuel with an immediate threat to nearby homes.

The San Diego County Sheriff's Department released an emergency evacuation message on 12/2/2020 at 10:45pm: "There is a wildfire near 2400-block Wind River Rd in unincorporated El Cajon. Emergency responders are addressing the situation. An evacuation order has been issued for your area. An evacuation order means that persons in the affected area need to evacuate to a safe location to ensure their safety. All residents can evacuate to 2951 Jamacha Rd at the Edwards Cinemas. If you need emergency assistance in evacuation, call 9-1-1. If you need additional information, visit www.sdcountyemergency.com or call the San Diego Sheriff's Department non-emergency line at 858-565-5200."

Evacuation warning for those who live along Hilton Head Road east of Jamacha Road. Start packing your essentials and get ready to leave.
When told to evacuate, leave immediately. Any delays could take away firefighters from their job of dealing with the #WillowFire. pic.twitter.com/yd1jN5tlpa