Bubba the tortoise gets lost in Ramona

"This just doesn't happen in Ramona. You see guys on horseback. You see long horn cattle. You see rattlesnakes. You see coyotes. You see turkeys. You see just about everything up here but not a huge tortoise." 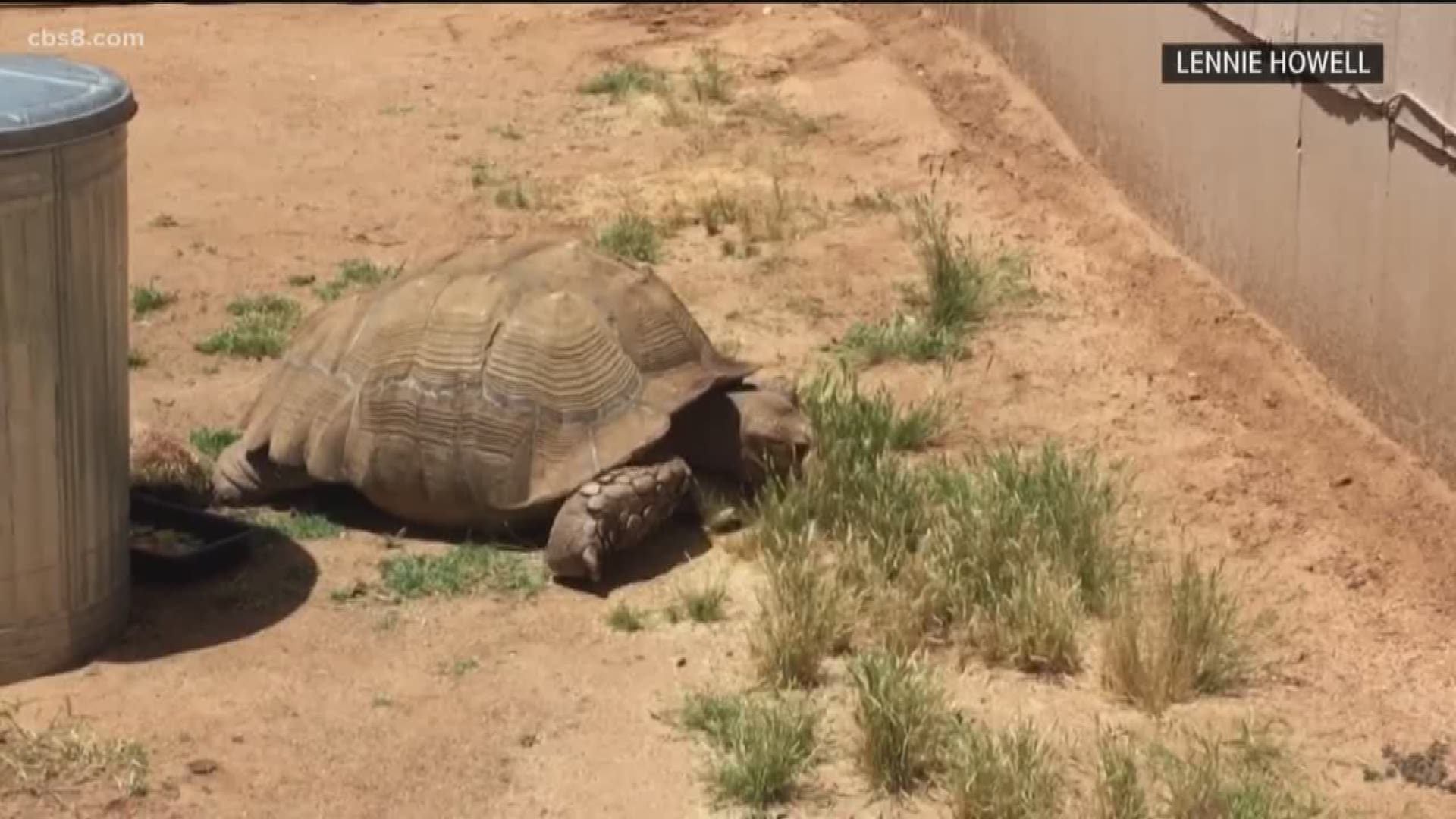 RAMONA, Calif. — If you came home and found a 200-pound tortoise sitting in your front yard would you come out of your shell to help it?

In Tuesday's Zevely Zone, Jeff traveled to a galaxy far away in Ramona to see what one man did when he came across a huge tortoise.

"He is trimming my grass for me! What a great guy," said Lennie Howell.

"I just think 'my god, where did this creature come from?' This just doesn't happen in Ramona. You see guys on horseback. You see long horn cattle. You see rattlesnakes. You see coyotes. You see turkeys. You see just about everything up here but not a huge tortoise."

The date was May 4th, known to many as Star Wars day for the popular pun, "May the Fourth Be with You".

"Chewbacca is his name because he chews a lot and I found him on the Fourth of May which is 'May the Fourth Be with You' Star Wars day," said Lennie.

Lennie did what any homeowner would do: he sent his daughter to the store for lettuce and started taking pictures.

"Your shadow in that picture made you look like Darth Vader," Jeff said.

Not sure if Darth Vader would have put his evil empire on hold to help a tortoise but Lennie did.

"He wandered to the right house?" asked Jeff.

"He did wander to the right place," said Lennie who as a child raised three tortoises.

"I am a humaniac," he said with a twinkle in his eye. I mean, who else would fortify his yard and immediately build a home for the runaway with his baffled pets looking on.

"Ha, ha, ha, they didn't know what to think," said Lennie.  "The cats were just looking out the window like 'that is a moving rock with legs.'"

Turtles may be slow but news travels fast in Ramona.

"Yep and they ended up coming to me," said Lennie.

He located the family that lost the tortoise and offered to show us where they live.

Scott Hall (my photographer) and I have done some pretty crazy Zevely Zones. This may be the craziest one yet! We were wondering how far can a tortoise wander down a country road? We had gone two miles. Two miles!

We ended up driving about six miles, to the home of the Davis family.

"Oh, he found him and rescued him for us," said Erin Davis laughing.

Erin and her boys Blake, Charlie and Ashton followed the tortoise tracks until the trail went cold.

"It just went missing like right there but we searched all around through here," said Blake.

As the crow flies, the tortoise only traveled about a half-a-mile over a hill that separates the two properties.

"Very relieved, very relieved. We were all upset and crying. We searched for two days looking for him," said Erin.

So much for the name Chewbacca, the tortoise is actually called Bubba.

"He's got his head all tucked he's sleeping," said Lennie.

Bubba should be tired it took incredible strength to break out of his enclosure. It was May 4th after all and the "Fourth" was with him. The Davis family since fortified their yard so Bubba won't escape again. The family is also installing a pool because kids - and tortoises - love pools.