Natalie Berndes was born in 1915 and survived the pandemic of 1918. 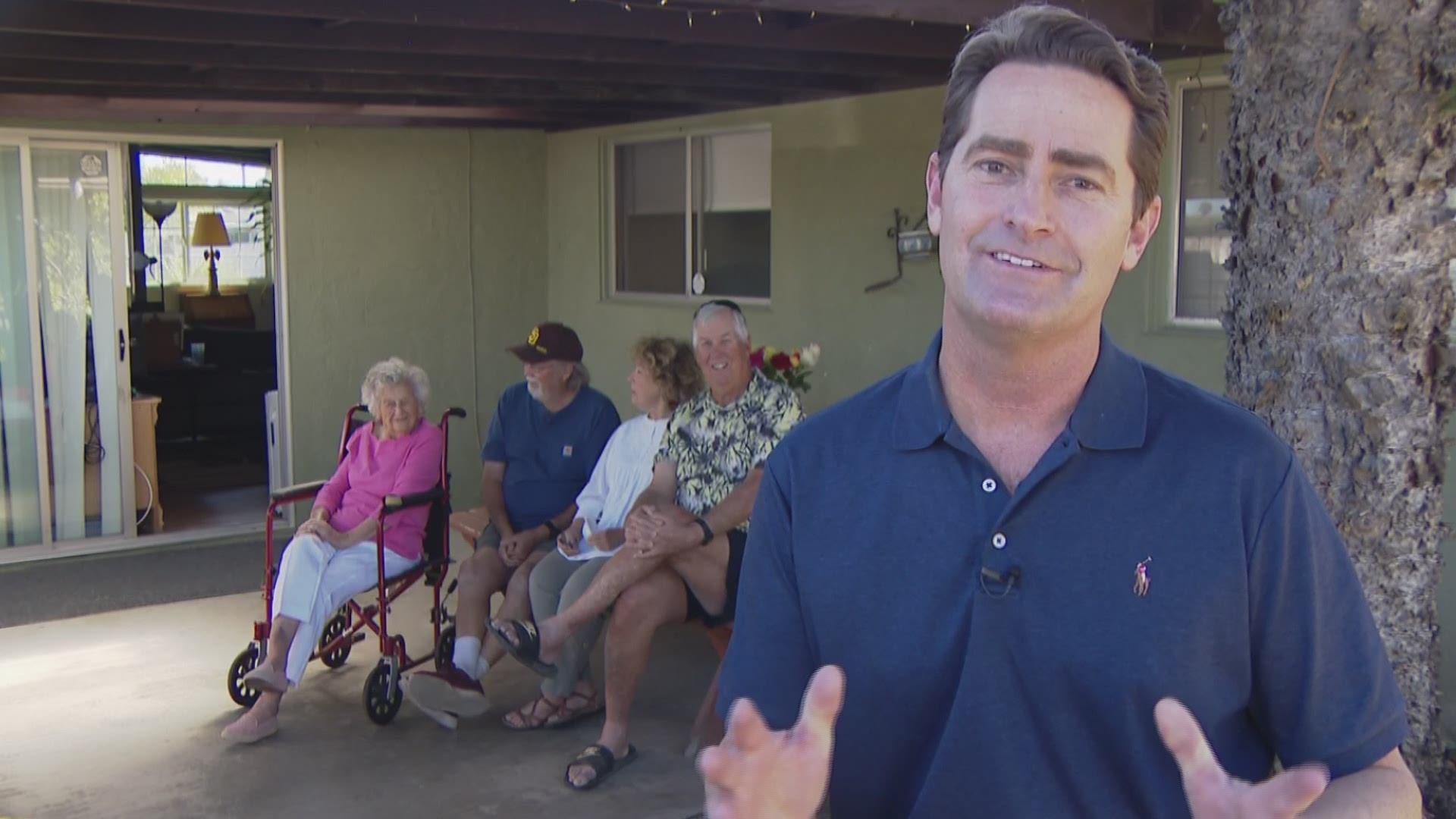 SAN DIEGO — If you think this pandemic has been challenging, you should have been around in 1918. In this Zevely Zone, I went to Clairemont in San Diego to wish a very special woman "Happy Birthday".

That's where I found this lovely lady smiling with her loved ones singing to her. "Happy birthday to you," sang the small gathering.

The guest of honor,  Natalie Berndes, is turning 106 years old.

We got together to celebrate a few weeks early because I was so excited to meet Natalie and tell her story.

There to celebrate were three of Natalie's children Jon, Peggy, and Scott.

"We call her Superwoman, nothing bothers her, she doesn't get sick, we weren't even worried about the pandemic," said Scott.

"She remembers her mom telling her to not go outside," said Scott.

Natalie's eye lit up and she added. "I was just a tiny little girl, but everybody was very sad," said Natalie. She survived the pandemic, grew up and moved to San Diego where she went to college.

"She is the oldest living graduate of San Diego State," said her son Jon. She graduated in 1937 with a BA degree in Education.

Natalie married an oilman named A.E. "Red" Berndes.  Red was an oil wildcatter, moving from Oklahoma to Kansas to Venezuela and California. Between the years 1939 to 1951, they moved a lot.

"35 times in 13 years," said Natalie. San Diego was their last stop.  Her family has a picture of her at Ocean Beach with her girlfriends in 1933. Natalie is the one with the low-cut bathing suit showing a little too much of her back.

"She's a risk-taker, she doesn't apologize, and if she likes it, that's all that counts," said her daughter Peggy.

San Diego can be somewhat of a small world. Natalie's son Jon has been featured in the Zevely Zone twice before.

"I've been growing pumpkins for 25 years," Pumpkin Jon as you know him grew the largest pumpkin in San Diego history... but never revealed until now his secret weapon.

"This is Pumpkin Granny, she helped me grow them let me tell you," said Jon.

Just like the pumpkins, they grow them strong in this family. How else can you explain Natalie living to be 106 years old?

"The thing about mom is that she always has a good attitude a positive attitude that things are going to turn out well," said Peggy.

"She is infamous for telling dirty jokes that embarrass all of us, it's scary."

Jon added, "I mean she is always smiling."

Natalie and Red settled in Point Loma in 1951, where she and Red raised their family.  Red was a founder of Loma Portal Little League (now Peninsula) in 1958. In 2012, one of the fields was named in honor of Red Berndes.

Natalie lives with her son Scott and grandson Bret. She loves to write poetry and limericks. Her family has published a book of her poems. Most of all, throughout her extraordinary life, Natalie Berndes has always been gracious, kind-hearted, and loved by her family and friends.

"Just live every day. Enjoy the good life. You deserve it," said Natalie.

"This world was meant to be enjoyed that is the way I feel about it."