A follow-up on a Carlsbad family that's receiving the surprise of a lifetime. 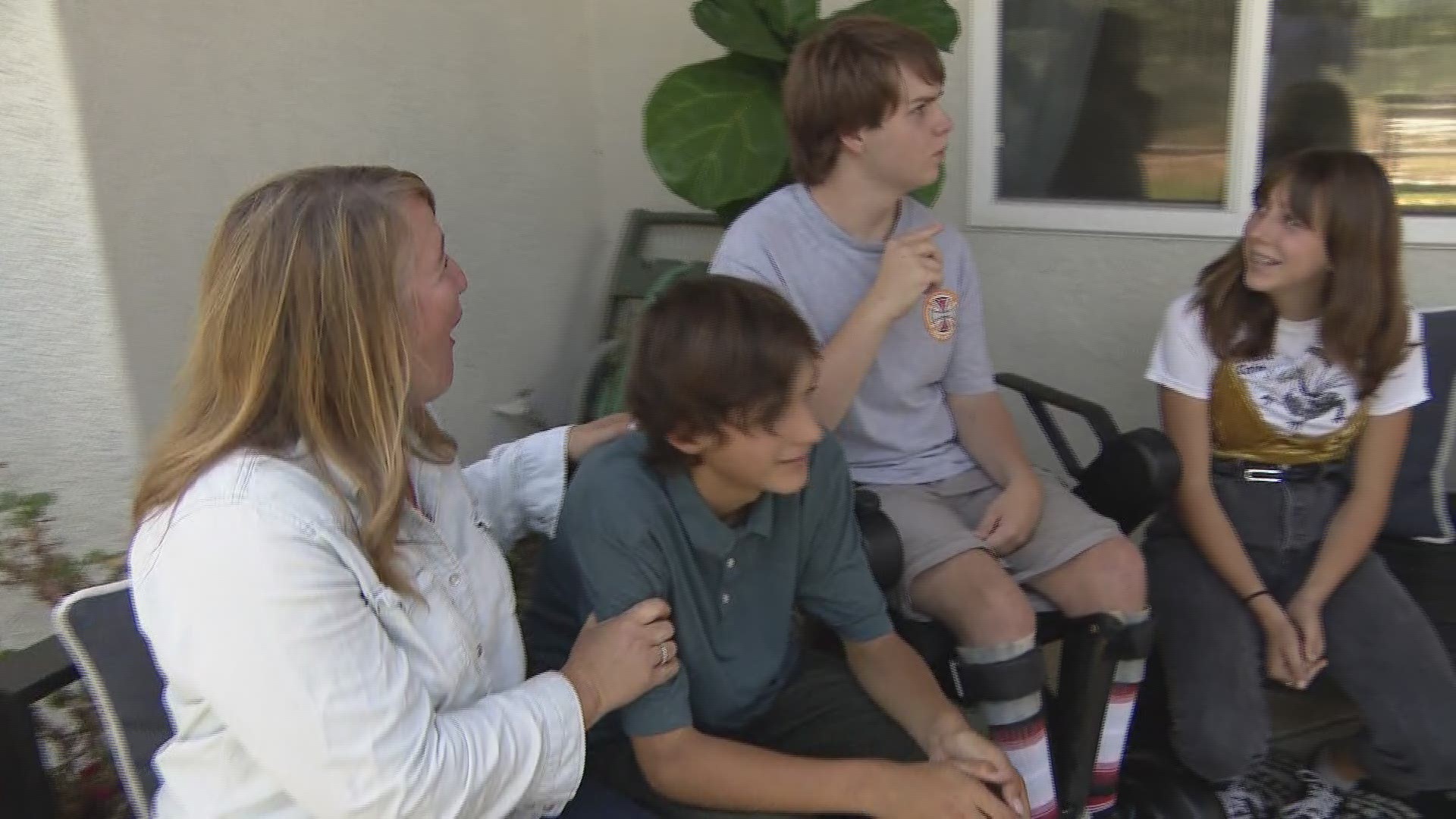 CARLSBAD, Calif. — Sometimes the biggest bands have the biggest hearts! A few weeks ago the idea of a special surprise was born as we visited with a Carlsbad family that had suffered a terrible tragedy years before.

As I type this story, my arms are filled with those tiny goose bumps that tell a person something truly special has occurred. I want everyone to know how wonderful Switchfoot has been since I first reached out to them.

Keep in mind, the band just returned to North San Diego after touring in Japan and Europe and playing with Bon Jovi! I am sure they are tired, but after grabbing a quick surf session here, they were ready to play a mini-concert to a family in need.

"Hey guys, I got a surprise for you," I told the Carlsbad family sitting on their back patio. Three members of Switchfoot appeared with guitars and a drum.

"Oh my god are you kidding me? Switchfoot!" said Melissa Coleman, who had no clue about the Switchfoot surprise.

"How are you guys doing? We came here to play some songs for you if that's okay," said Jon Foreman, the band's lead singer. Jon is with his brother Tim and the band's drummer, Chad Butler. They watched the Zevely Zone segment on what the family has endured and agreed to the backyard pop in.

Jon and Tim graduated from San Dieguito High School. Chad Butler grew up in Carlsbad. The band is known for its gracious gestures and big hearts.

There is no family more deserving for this treat. Eleven years ago, tragedy struck the Carlsbad family of five. "There was a wreck -  a single car accident and my sister and brother-in-law did not survive," said Melissa Coleman.

Melissa was on her way to meet her sister's family at a wedding in Colorado and was told to go straight to the hospital.

"The kids, who were 1, 2 and 5 years old did survive," said Melissa. "Ian came out with a brain injury, so that is where our life began together,"

Melissa lived in Oklahoma in 2008, but immediately moved to Carlsbad to become a mother to her sister's children. "There was no thought to that part of it," said Melissa. "I just knew that I needed to be here."

Two of the children, Lauren and Luke, survived the car crash with a few scratches and broken bones. However, Ian, who is now 16, needs ongoing aquatic therapy for his traumatic brain injury. A company called Watkins Wellness heard about the family's need and donated an Endless Pool E-700.

"I was very shocked that I was getting a pool," said Ian.

The pool has a treadmill and stereo system. During our interview, Ian was helped into the pool by Lauren and Luke. He started working out. He listened to a song called "Souvenirs" by Switchfoot because it's his favorite song.

"It just makes me feel better about myself," said Ian.

That's when I tossed out the idea of making some calls to see if there was any chance we could keep the feel-good story going. I contacted the band to see if they would play "Souvenirs" for Ian in his backyard by the new pool.

"Here's to the twilight. Here's to the memories, these are my souvenirs my mental pictures of everything," sang Jon Foreman.

Ian then told the band about the loss of his parents and what the song "Souvenirs" has meant to him.

"My parents died eleven or so years ago and so it just brought a lot of light and hope to me," said Ian.

"That is the highest honor as a musician to hear that the song that you have worked on could actually be a part of healing," said Jon Foreman. "We just played for tens of thousands of people in Europe with Bon Jovi and we always tell people it's not the big shows it's the little shows, so this show for us is equally as important as playing for thousands of people."

Switchfoot offered to play any song and when the family suggested. "Dare You to Move," Jon Foreman said to Ian, "The purpose of that song is you. I can't think of a better reason that we wrote it. So you are the reason we wrote it." To which Ian responded, "I am just really surprised that this is happening."

The band played the hit that's been heard by million of fans across the world.

For Melissa, who is raising her sister's children, the lyrics are fitting because Ian dares himself to move everyday. "This is going to be the highlight of his life for sure," said Melissa.

After Switchfoot finished the song, Jon Foreman approached Ian for a high five and said, "Honored! So honored to play for you Ian and next time we need to go surfing together."