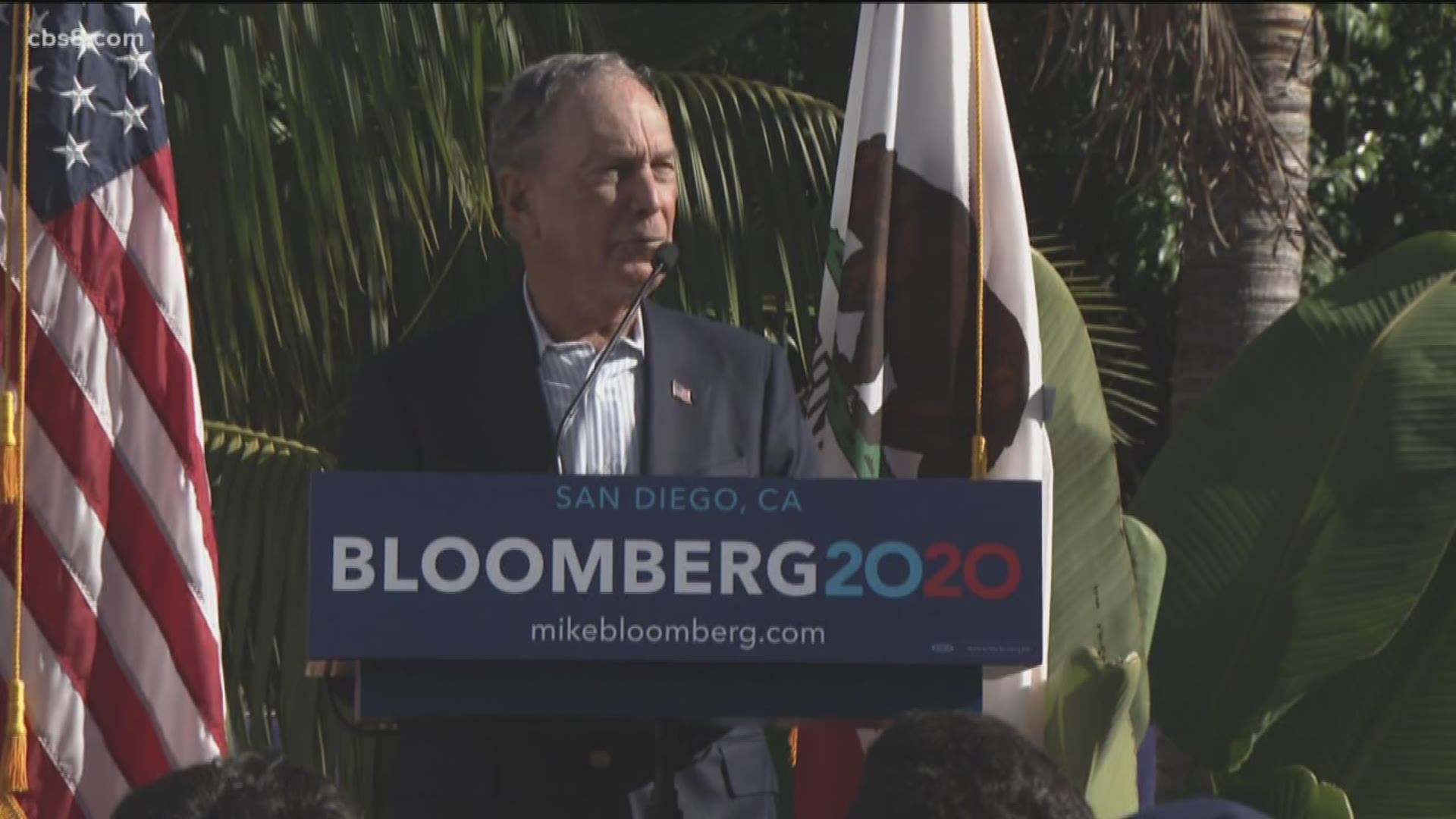 Bloomberg first toured the veteran-owned software engineering and design company Fuse Integration, two days after his campaign released what it billed as its "Plan to Strengthen Economic Security for Veterans and Military Families."

-- educating companies to better understand the unique skills that veterans bring to the workforce, including the value in including veterans as part of their diversity and inclusion efforts;

-- making employment and education benefits available to veterans; and

RELATED: 'He has no respect for the truth' | Bloomberg goes on offensive against Trump, opens office in Charlotte

While gun control was the primary topic, Bloomberg devoted time to discussing jobs, homelessness, and education. After the event, the presidential hopeful shook hands and posed for pictures.

-- closing the "boyfriend loophole" which allows domestic abusers to have guns, despite criminal convictions or restraining orders, because they are not married to their victims;

-- requiring gun buyers to be at least 21 years old to buy handguns and semi-automatic rifles and shotguns;

-- setting a temporary bar on gun possession by assault and other violent misdemeanor offenders;

-- reinstating the federal ban on assault weapons and high-capacity magazines;

-- banning all guns in elementary and secondary schools, colleges, and universities, except for law enforcement;

-- increasing funding for the Bureau of Alcohol, Tobacco, Firearms and Explosives by up to $100 million annually so it is able to police the gun industry more effectively;

-- requiring all gun buyers to wait at least 48 hours before any firearm purchase; and

-- requiring all gun owners to report to police if their firearms have been lost or stolen, within three days after they know or should know that their guns are missing.

The National Rifle Association tweeted that "Bloomberg wants gun registration and every oppressive/failed gun control scheme ever conceived" and called him a "hypocritical billionaire, with 24/7 armed guards" who "doesn't believe self-defense is a fundamental human right or that gun ownership is a right as determined by the Supreme Court."

On Monday, Bloomberg is slated to have coffee with Los Angeles Mayor Eric Garcetti before opening a field office in LA.

Bloomberg declared his candidacy Nov. 24, saying he was "running for president to defeat Donald Trump and rebuild America."

"We cannot afford four more years of President Trump's reckless and unethical actions," Bloomberg said. "He represents an existential threat to our country and our values. If he wins another term in office, we may never recover from the damage."

When asked about Bloomberg's candidacy on Nov. 8, Trump responded, "Little Michael will fail."

"There is nobody I'd rather run against than Little Michael," Trump said.

Just like he did in his three successful campaigns for mayor of New York City, Bloomberg is self-financing his presidential campaign and is not accepting campaign contributions, a decision that will keep him out of the Democratic presidential debates, which require donations from a specified number of donors.

The Bloomberg campaign has spent $128 million on television commercials, The New York Times reported Dec. 29, citing figures from Advertising Analytics, an independent firm, which projects that Bloomberg is likely to spend a combined $300 million to $400 million on advertising across all media before the Super Tuesday primaries March 3.

The campaign also spent $18 million on ads on Facebook and Google in December, The Times reported, citing figures from Acronym, a digital messaging firm that works with Democrats.

Bloomberg has decided not to compete in the first four contests to select delegates to the Democratic National Convention -- the Iowa caucuses, the New Hampshire primary, the Nevada caucuses and South Carolina primary.

Bloomberg will first compete in the Super Tuesday primaries, which include California.

According to a biography supplied by his campaign, Bloomberg grew up in a middle-class family in the Boston suburb of Medford, Massachusetts, the son of a bookkeeper at a local dairy who never earned more than $6,000 a year in his life.

When he was 12 years old Bloomberg became one of the youngest Eagle Scouts in history. To help pay his way through Johns Hopkins University, he worked in a parking lot and took out government loans.

Bloomberg received a bachelor's degree in electrical engineering from Johns Hopkins in 1964 and a master's degree from the Harvard Business School in 1966.

Bloomberg became a general partner of the Wall Street investment bank Salomon Brothers in 1973. He was laid off in 1981 after it was purchased by the Phibro Corp.

A day after being laid off, Bloomberg decided to start his own company which would sell a desktop computer that connected investors to a vast network of information and data, which would later be known as Bloomberg Terminals.

Running as a Republican after being a lifelong Democrat, Bloomberg was elected mayor of New York City in 2001, eight weeks after the 9/11 terrorist attacks. He was re-elected as a Republican in 2005 and as an independent in 2009. He returned to the Democratic Party in 2018.

Bloomberg would be the oldest president. He will turn 78 Feb. 14. Ronald Reagan was 17 days short of his 78th birthday when he left office in 1989.

Bloomberg would be the first Jewish president, a distinction that would also apply to Vermont Sen. Bernie Sanders.