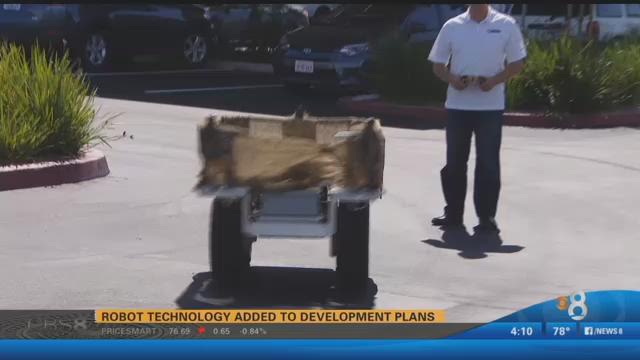 The Lilac Hills Ranch Project would build 1700 homes on about 600 acres. The developer is partnering with a company that will connect the homes with a network of robots.

The robots would be available to carry groceries home from the market, mow lawns and even make sure kids walk to school.

"It's going to allow us to help create the new generation of communities that support walkability and really prioritize the pedestrian," said Randy Goodson, CEO of Accretive Investments Inc.

Goodson is the developer for the proposed neighborhood and said they play on buying a fleet of robots for Lilac Hills that will be connected to a virtual grid.

Sensors will be placed in lights that will connect to unmanned robots like golf carts and segways. The goal is to make life easier and safer.

"For example, if a single female wanted to go walking or jogging any time of day, they could just dial up a trail companion and follow them and make sure they're safe," said Goodson.

Goodson also said, "you could randomly just walk in front of any of these vehicles and they will stop complete stop, and based on the virtual rail designation if there's enough room they will navigate around you. If there's not, they'll stop and choose another path."

The developer plans on buying the robots and installing the system they will run on. It will be the Home Owners Association that will maintain them.

"With Lilac Hills, we want to show the world there is a better way, and we can reduce greenhouse emissions and we can greater, smarter, better environments," said David Bruemmer, with 5D Robotics, and maker of the robots.

The Lilac Hills development has not been given the green light yet, and still faces plenty of opposition.