A new meal surcharge isn't sitting well with local diners and now it is raising legal concerns. The City Attorney's Office announced Thursday that it is looking into the legality of a surcharge bei... 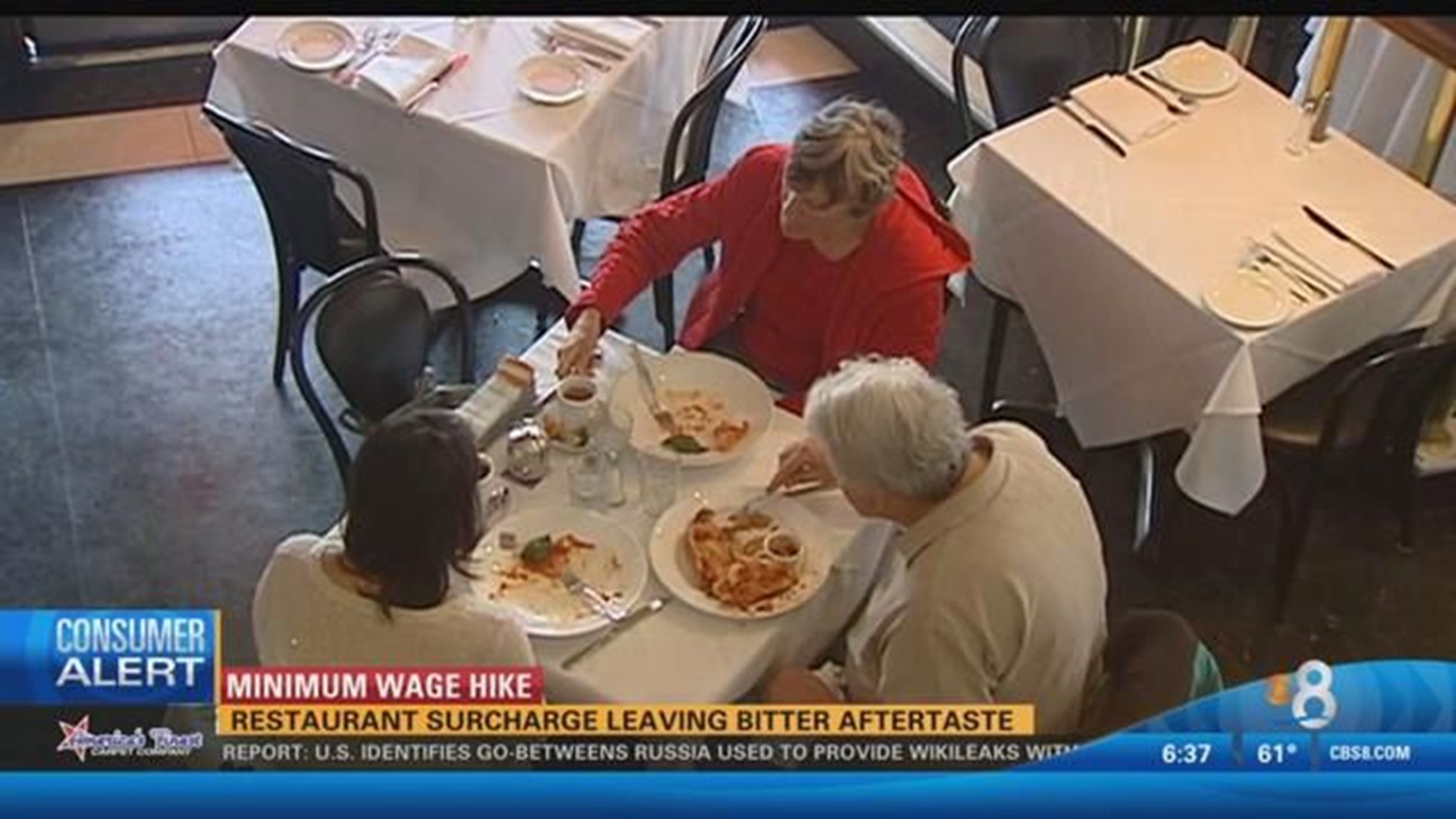 The City Attorney's Office announced Thursday that it is looking into the legality of a surcharge being levied on some restaurant customers in response to San Diego's minimum wage increase.

City Attorney Mara Elliott said the investigation was launched after complaints about the practice were received on a consumer hotline. The added cost was not made known to customers beforehand and was falsely billed as being mandated by the government, she said.

Owners claim it is in response to the wage hike that went into effect this month. But legal experts say there is no basis for the surcharge.

The minimum wage in San Diego increased on Sunday from $10.50 to $11.50 an hour, per a law passed by the City Council and ratified by voters last June.

The new figure is above what's required statewide, including neighboring cities.

"Some diners are surprised to learn that they're being charged as much  as 3.5 percent above and beyond what the prices on the menu indicate," Elliott  said at a news conference.

"Many of these diners did not learn of this so-called surcharge - which is not mandated by any governmental entity - until they received their check," Elliott said. "At that point, of course, it was too late to send the food back."

The City Attorney's Office declined to divulge how many complaints were received, but revealed that more than a dozen establishments could be subjected to an investigation for false advertising under the state Business and Professions Code.

Business owners have had ample time to think through the ramifications of the minimum wage law's ramifications and make necessary lawful adjustments, Elliott said. She said they should consult with their attorneys on how to present the extra charges to customers.

According to the San Diego Union-Tribune, well-known eateries like the Bali Hai, Tom Ham's Lighthouse, the Brigantine and those in the Cohn Restaurant Group - including The Prado and Corvette Diner - have added surcharges.

Stephen Zolezzi, president of the Food & Beverage Association of San Diego County - which advises restaurants on labor costs - told the newspaper that around 30 restaurateurs planned to add a surcharge.

"These are mandated increases to the cost of doing business that we have absolutely no control over," Zolezzi said.
Assistant City Attorney John Hemmerling said he hasn't noticed "any collusion or conspiracy" among restaurant owners to levy the surcharge.

On Thursday, the California Restaurant Association issued a statement regarding the surcharges in San Diego. Their statement included the following:

"To adapt to wage increases, restaurants around the state have either raised menu prices, reduced employees' hours, reduced their own hours of operation, or adopted a surcharge or, in some cases, eliminated tipping and are now using a service charge. San Diego is not alone in this challenge and restaurants are not the first business to use a surcharge -- many hotels and transportation providers also use a surcharge."

Whatever avenue each business chooses as a way to survive into the coming years, restaurants in San Diego and in every city want to be around for a long time to come."
The city's consumer hotline at (619) 533-5600 operates weekdays from 9 a.m. to 5 p.m. Complaints can also be filed online at sandiego.gov/cityattorney.