CalFire on Tuesday reported that the West Fire in Alpine has been fully contained, but fire crews will continue to be assigned for patrol purposes. 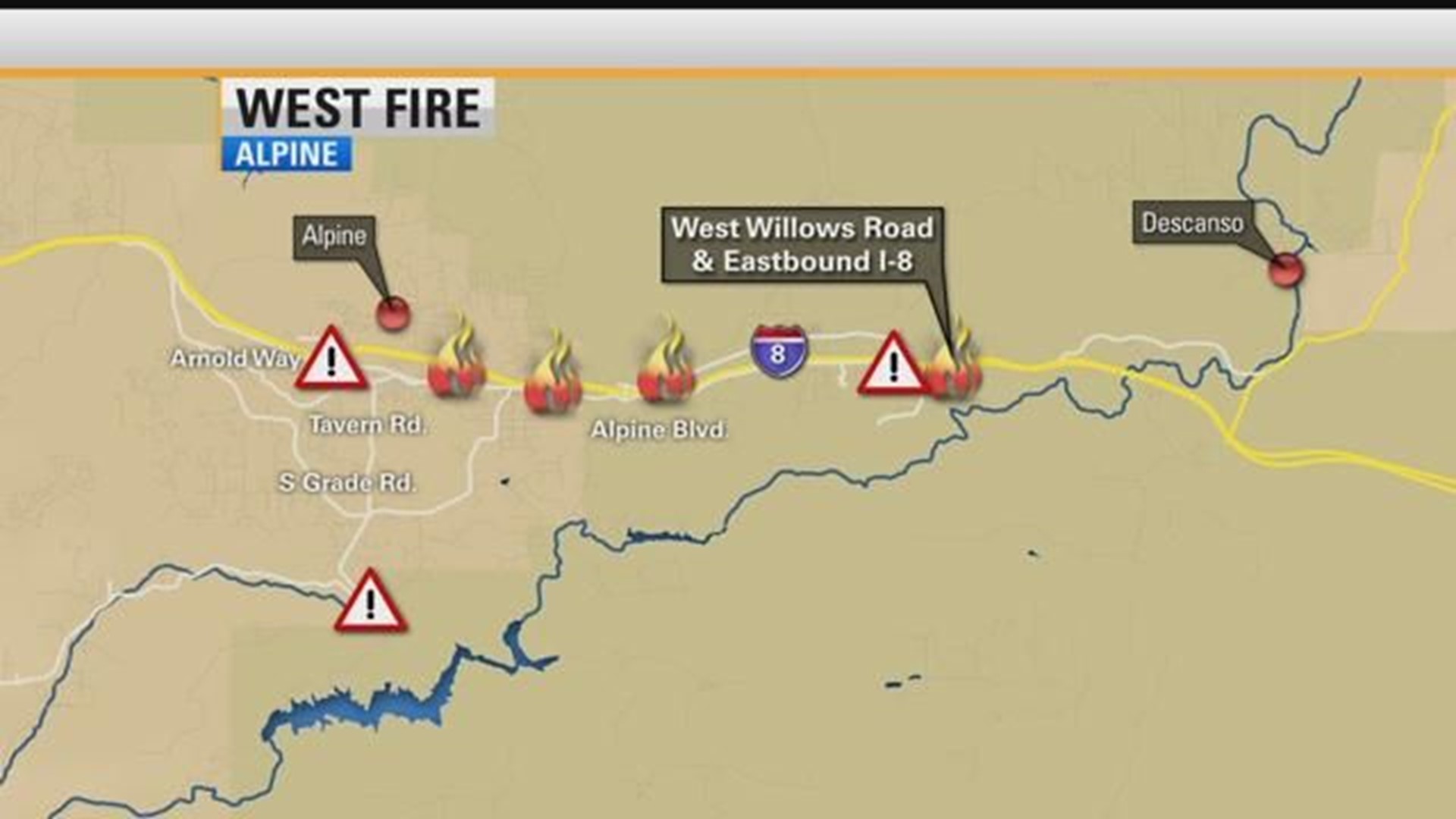 Evacuations: All evacuation orders were lifted as of Sunday afternoon

Evacuation Centers: A permanent evacuation center is set up at Los Coches Creek Middle School at 9669 Dunbar Lane. The Lakeside Rodeo Grounds at 12584 Mapleview Drive is open for large animal evacuations. For More »

ALPINE (NEWS 8) - The Latest on the fast-moving brush fire (West Fire) alongside Interstate 8 near Viejas Casino in Alpine.

TUESDAY - 9:15 p.m. - The charred burn area of an Alpine-area wildfire that gutted three dozen homes and 29 other structures last week was fully  contained Tuesday as the county Board of Supervisors voted to extend a declaration of emergency in the aftermath of the 504-acre conflagration.

The disastrous blaze, dubbed the West Fire, erupted amid a searing heat wave late Friday morning on the south side of Interstate 8 near Willows Road in Cleveland National Forest and quickly spread to nearby residential neighborhoods.

"We had structures on fire within the first about eight minutes of the fire burning," local Cal Fire Capt. Tony Mecham told the supervisors.

At the height of the blaze, 90 percent of San Diego County Fire Authority and local Cal Fire crews were deployed to fight the flames, which also damaged 18 homes and two accessory buildings.

A shelter set up by the American Red Cross served 91 people displaced by the fire. Additionally, the Lakeside Rodeo Grounds hosted 10 horses, three goats and three alpacas displaced by the blaze.

Late this afternoon, Cal Fire announced that the smoldering burn area of the blaze had been fully surrounded.

Though the fire has been extinguished, crews will remain at the site through the upcoming weekend to watch for and douse any flare-ups that might occur, Mecham said.

County officials have set up an assistance center at the Alpine Library to help those affected by the fire navigate their recovery and rebuilding processes.

On Friday, Chopper 8 footage showed large tile-roofed homes residential trailers and small outbuildings engulfed in fire. Dozens of structures appeared to have been gutted. Crews from various local agencies attacked the blaze on the ground and aboard water- and retardant-dropping aircraft while braving midday heat measured by the National Weather Service at 108 degrees.

One crew member suffered minor burn injuries to his face while battling the blaze, and had been expected to remain hospitalized overnight, Cal Fire reported.

At the height of the blaze, about 3,500 homes and businesses at and around the site of the wildfire were without power, according to San Diego Gas & Electric. Some of those addresses are served by a circuit that the utility decided to deactivate as a precaution, and the rest lost service due to fire- related equipment damage, SDG&E spokesman Wes Jones said Friday.

Power had been restored by Sunday afternoon to 510 customers out of 640 who lost power, according to SDG&E.

The gubernatorial decree cleared the way for the state to provide immediate disaster assistance to the county, allows for expedited unemployment benefits for anyone who lost a job due to the blaze and waives fees for replacement of documents -- including birth certificates, marriage licenses and vehicle titles -- lost to the flames.

Photo shows cars and structures destroyed by the West Fire in Alpine. (July 7, 2018)

4:38 p.m. - No official word on the number of homes lost in the West Fire, 400 acres burned, 5% contained. An Alpine Firefighter was injured fighting the fire. He suffered slight burns to the side of his face. He remains hospitalized but will be released tomorrow.

2:34 PM - SDG&E is reporting 3,000 people are without power due to outages related to the West Fire in Alpine.

Facebook video from News 8 reporter, Monique Griego, on scene of firefighters putting out a house fire.

1:05 PM - A fast-moving brush fire broke out alongside Interstate 8 near Viejas Casino amid scorching summer temperatures today, threatening numerous rural homes and sending a column of thick smoke over the East County.

The blaze erupted for unknown reasons about 11:15 a.m. off West Willows Road in Alpine, according to Cleveland National Forest officials. Within about 30 minutes, the flames had spread over roughly 15 acres and were an immediate threat to structures, according to the federal agency.

As of early afternoon, the flames had engulfed "multiple" mobile homes.

Crews from various local agencies were attacking the blaze on the ground and aboard firefighting aircraft in midday heat measured by the National Weather Service at 108 degrees.

San Diego County Sheriff's is reporting the need for IMMEDIATE evacuations at Highland Mobile Home Park and the area immediately behind the Albertson’s located at 2955 Alpine Blvd. Individuals can evacuate to Viejas Casino (5000 Willows Road).