Philip Rivers rallies team from 21-0 deficit to comeback win, following up a dreadful performance in week 5

Last week many in Indy were calling him a highly decorated, highly paid game manager. But boy, have they changed their tune. 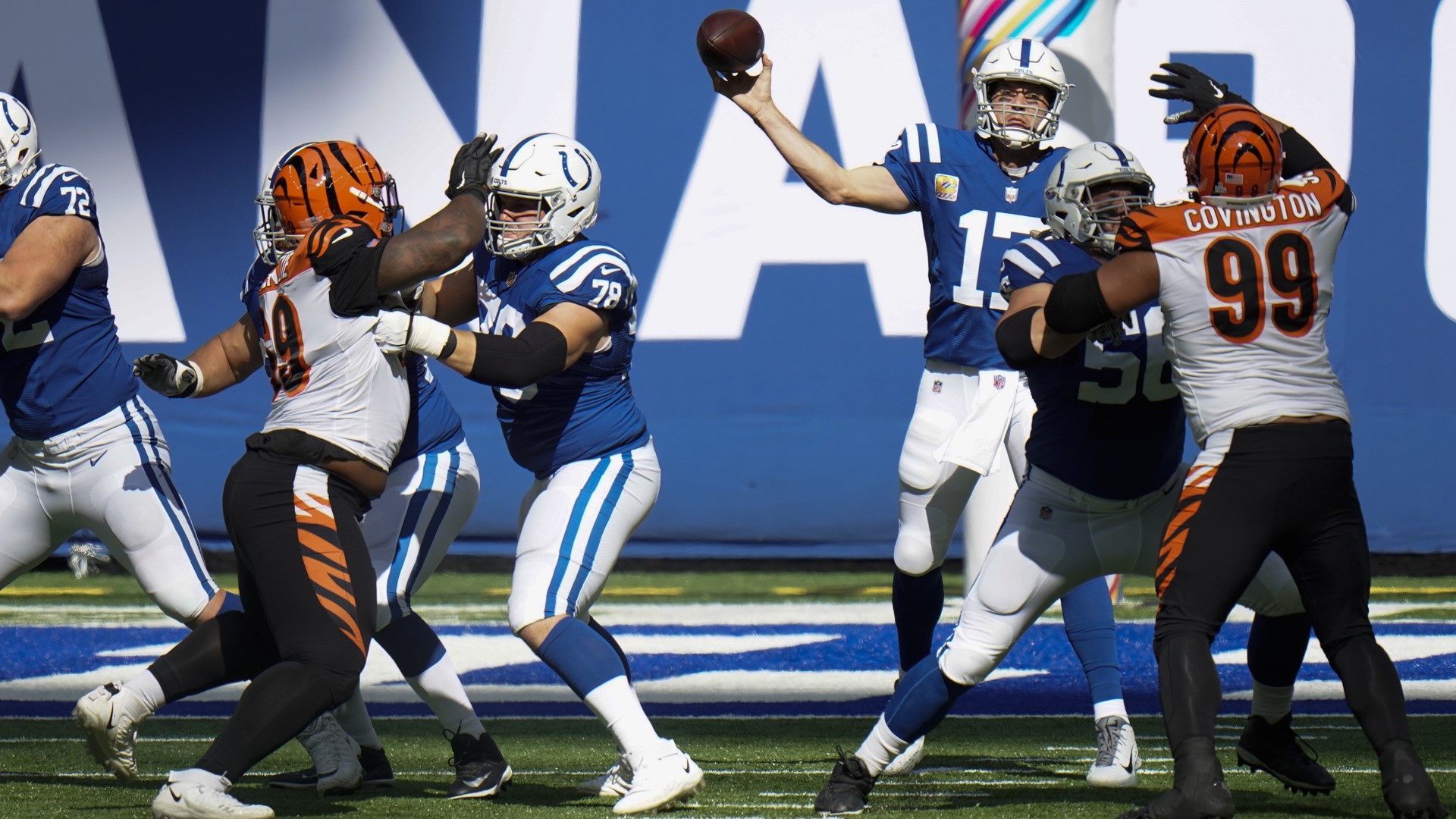 INDIANAPOLIS — Well, well, well, just when many of us thought that Philip Rivers was no longer capable of carrying a football team on his right shoulder, he does exactly that in Indianapolis on Sunday, rallying his colts from a 21-0 deficit to beat the Cincinnati Bengals, 31-27.

Let's not forget, it was just one week ago after a dreadful performance against the Cleveland Browns that many in Indy were calling for Philip Rivers to perhaps be replaced. Philip was off to a rough start. They were calling him a highly decorated, highly paid game manager. But boy, have they changed their tune.

In Monday morning's Indy star, Jim Aiello wrote this, “Philip Rivers won the Indianapolis Colts a football game.  Without Philip Rivers dropping dimes all over Lucas Oil Stadium, the Colts don't rally from 21 points down to the Cincinnati Bengals, 31-27. Without his success Sunday, they don't mount the second-largest comeback in Indianapolis Colts franchise history.”

How about that? It was the second-largest comeback in Indianapolis Colts history. Philip Rivers did it in game six of his Indianapolis Colts tenure. Let's look at the numbers: 29 of 44, 371 passing yards, three touchdowns and just one miscue with the interception, and a quarterback rating of 105.4.

Philip Rivers now improved to four wins and two losses on the season with the Indianapolis Colts and that ties them for the final playoff spot in the AFC East with the Cleveland Browns. Of course, Cleveland, with their win last week over the Colts, would have the tiebreaker. But all that being said, when many were ready to jump off to Philip Rivers bandwagon, he comes through with his best performance to date in a Colts uniform.

Of course, many of us here in San Diego are used to this, what’s known as the Philip Rivers rollercoaster.  The ups and the downs. Like Forrest Gump’s box of chocolates, you just never know what you're going to get.

And that's exactly what his said coach was saying after this football game.

Frank Reich said, “You have to live with some mistakes, but the good is going to far outweigh one or two bad things that happen.”

Now, at times, it's more than two bad things that happen. But in this case, Rivers showed that even at the age of 38, he is still capable of getting it done through the air, proving many of us wrong for maybe giving up on him a little too soon.

Up next, the Colts have a bye week, so they'll remain 4 and 2 for a while. But Philip and the Colts are very much in the mix in the AFC. And how about this, the popularity of Philip here in San Diego is still very strong. The Colts-Bengals game went head to head Sunday at 10 a.m. with the Browns and the Steelers. And on paper, I think many would look at that and say, wow, that Browns vs Steelers game is going to easily win in the ratings battle. It did not.

The Browns and Steelers, meanwhile, earned a 5.8 rating. Of course, that game got out of hand pretty early as the Steelers took care of business.

The big ratings winner for the day Sunday was the afternoon game on Fox. Tom Brady and the Buccaneers beating Aaron Rodgers and the Packers. The 14.7 rating was the biggest football rating of the day.

The Rams and Niners last night looked like a good one. A lot of people here have clamored to see more Rams or 49ers games on TV but it only got a 9.8 rating on Sunday Night Football. That's pretty low for the prime-time game.