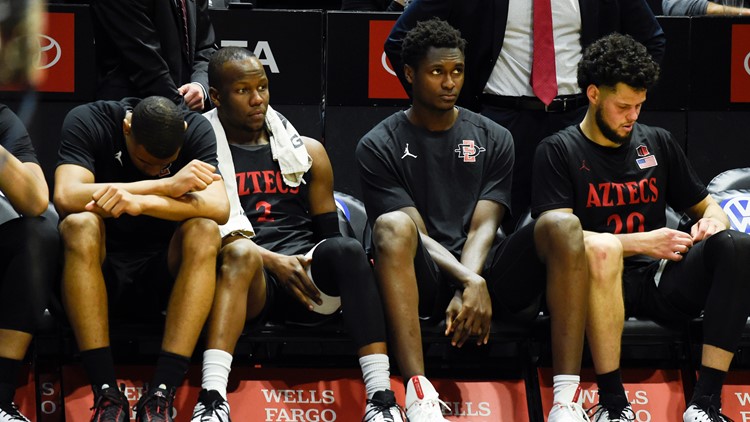 Photo by: AP
San Diego State players sit on the bench during the second half of an NCAA college basketball game against UNLV, Saturday, Feb. 22, 2020, in San Diego. UNLV won 66-63. (AP Photo/Denis Poroy)

However, the Aztecs didn't score again until Matt Mitchell made two free throws with 3:47 left, bringing them within nine, 57-48. San Diego State was again down by nine when Flynn began a 7-0 run with a 3-point basket with 2:36 to play.

Mitchell intercepted an inbounds pass, but his desperation 3-point shot from just behind the midcourt line hit the backboard as time expired.

The Aztecs were the last remaining undefeated Division I team. They also had the longest current winning streak in Division I.

"Well, we tasted defeat for the first time and it doesn't taste very good," San Diego State coach Brian Dutcher said. "Anybody that was saying they thought a loss would be good for the Aztecs, we don't feel that way at all. We're vastly disappointed.

"We wanted a perfect season, but it didn't happen and that's college basketball. I'm smart enough to know that every game you play is going to be a challenge. We have to use this moment to find a way to get better."

A men's Division I college basketball team has not completed the season undefeated since the 1975-76 season, when Indiana went 32-0.

Mitchell called the loss "a reality check that we're not invincible."

San Diego State's 26-game winning streak to start a season was the longest in Division I since Gonzaga began the 2016-17 season 29-0 before advancing to the national championship game.

The Aztecs will finish their regular season schedule with a home game against Colorado State on Tuesday and an away game facing the Nevada Wolf Pack next Saturday.