Falling trees blocked roads, hit vehicles, and in Point Loma, one crashed into a carport that collapsed onto multiple vehicles. 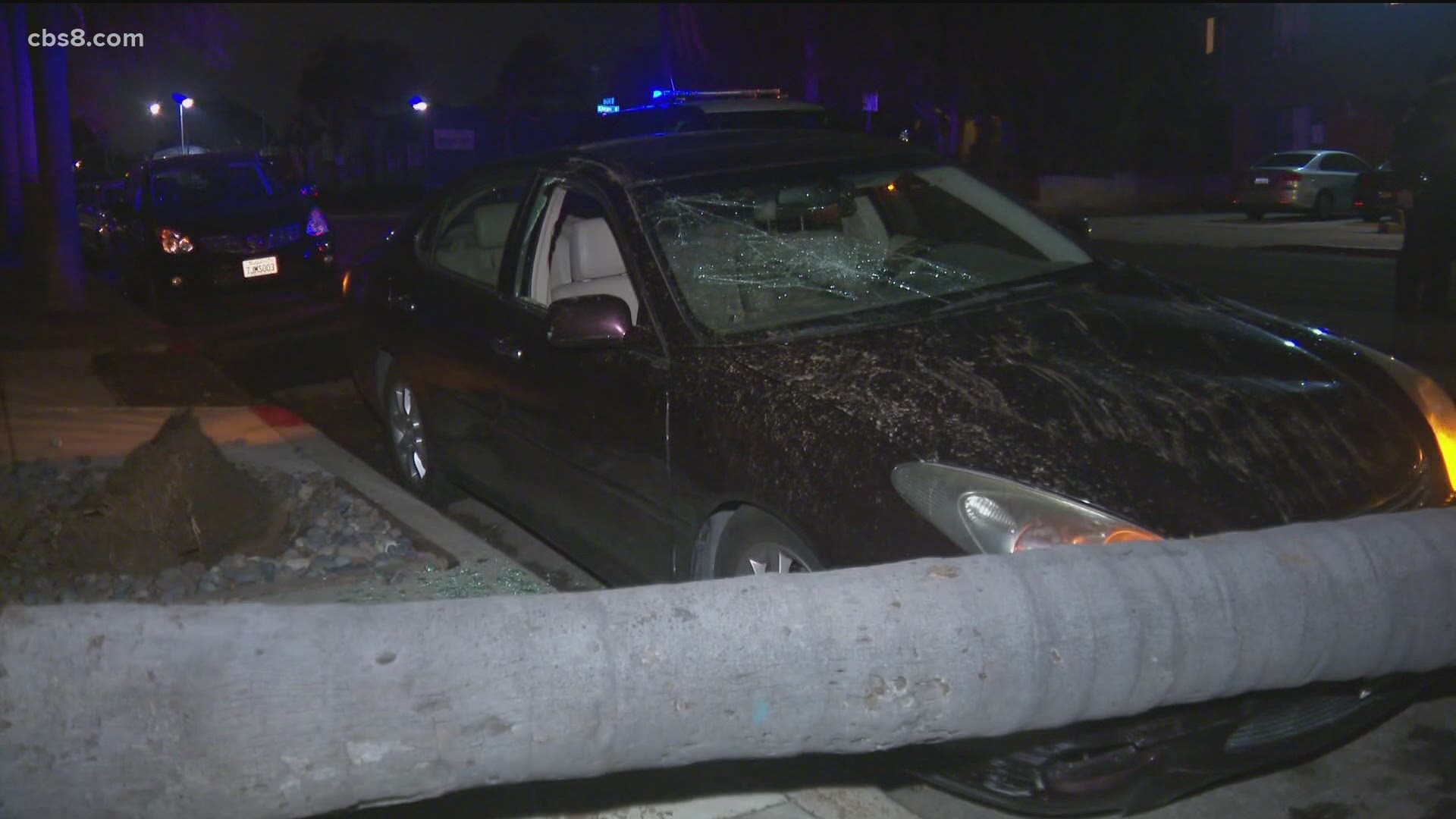 SAN DIEGO — A bizarre storm pounded San Diego County Monday with wind gusts topping 50 miles an hour in several places and that was just one of many surprises Mother Nature threw our way.  Hail pelted residents from San Carlos to Carlsbad and several spots in between. There was also snow in our local mountains and hit and miss heavy rain in several spots. It took winter awhile to get here this year, but now it's quickly making up for lost time.

Falling trees blocked roads, hit vehicles, and in North Park, a palm tree toppled down onto a car ,smashing the roof and damaging the window.

"We heard this huge crash," said Notch Nguyen. "I walked out and I thought whelp, it hit it."

In Point Loma, one tree crashed into a carport that collapsed onto multiple vehicles. We also had reports of power lines knocked down with SDG&E reporting thousands of customers lost power. And in National City, a shopping center's tall sign toppled over.

For California Highway Patrol officers, the chaos started before the sun came up. “Our officers are going from call to call to call,” said CHP Public Information Officer Salvador Castro. One of the scariest accidents happened on I-805 in National City. “Big rig hits the center divider wall and it hit another vehicle and ended up jack-knifing, blocking several lanes for a few hours,” Castro said.

The weather was so nasty, the county had to shut down its vaccination super station near Petco Park. San Diego police delivered the bad news as drivers showed up for their appointments. Gary and Karen Green had an appointment at 7 a.m. but were turned away. They came back later hoping the site would reopen, but no such luck.

“Just trying to get the appointment and being able to get it, finally you get it and then it's called off - so very frustrating,” Karen said.

County officials say this super station will also be closed Tuesday morning because heavy rain is in the forecast. News that's disappointing, but Gary understands these conditions make doing even simple tasks difficult.

“I couldn't even open either door to the outside, the wind was so strong, very strong,” he said. “So I would say, based on the tents here - I would say it probably made sense.”

Those who had appointments will get emails telling them they've been rescheduled for Thursday.

Despite the frustrations and the damage the storm left behind, many are trying to stay positive.