For the first time, beluga whale spotted off coast of San Diego

This whale traveled far from home. 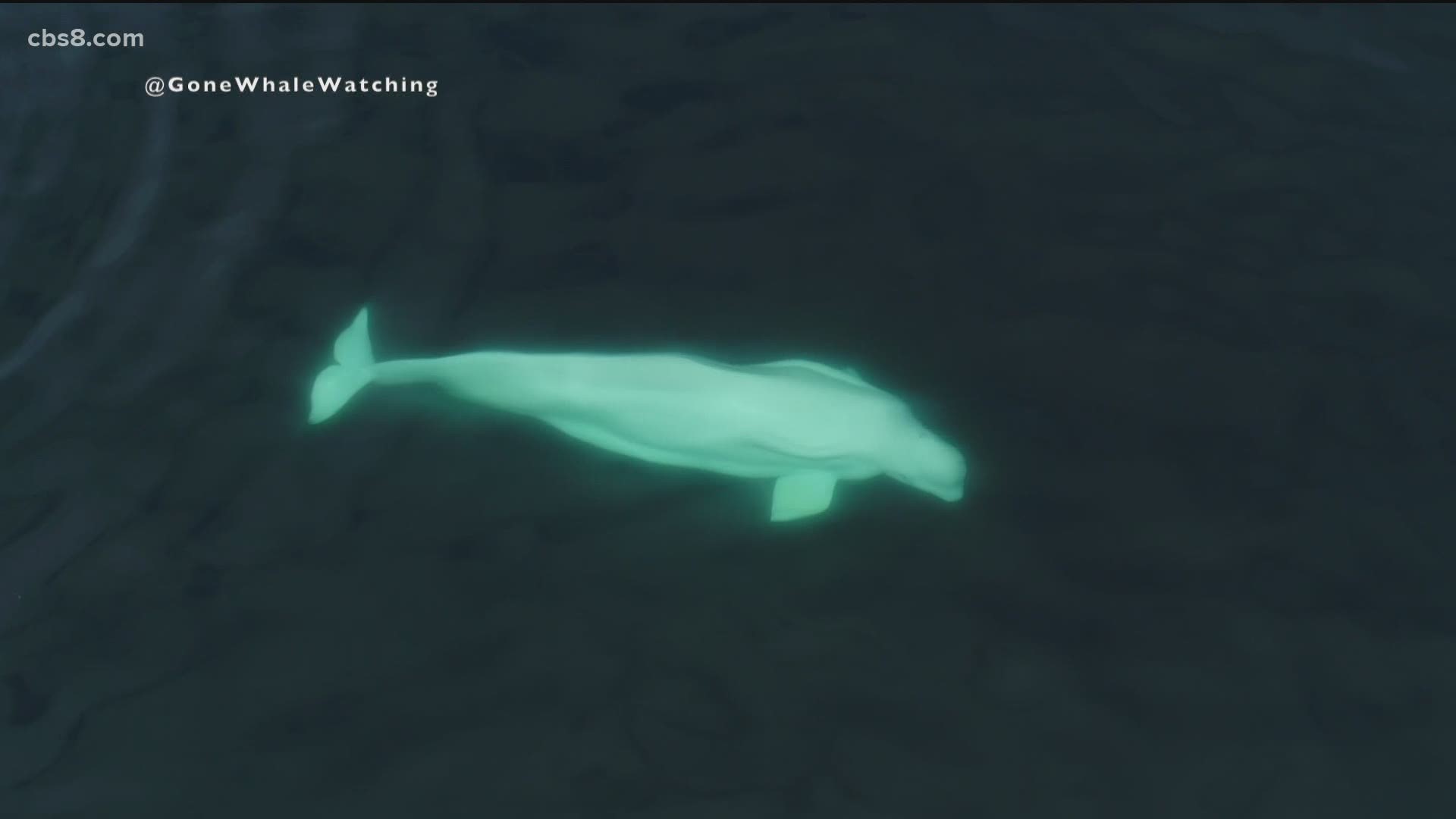 SAN DIEGO — In an incredibly rare moment, a captain captured drone video of a beluga whale off the coast of San Diego.

Domenic Biagini saw the beluga whale with his own eyes, but still couldn’t believe it.

“My jaw just dropped to the floor,” he said. “I had to pick it back up because I knew exactly what I was looking at.”

The spectacular creature was spotted Friday morning about seven miles west of Mission Bay. It’s the first time there has ever been a confirmed sighting of a beluga whale so far south of its closest know home in Alaska.

Domenic gives all the credit for spotting the animal to the crew of another boat, The Observer. Domenic said Chris Faist and Lisa LaPointe first noticed it, but were having trouble getting good pictures, so he said they gave him a call.

“ [They said] 'can you please come in here and try to get us proof of what we have, because no one is going to believe us',” said Domenic.

The drone video shows the whale is about 15 feet long with pearly, white coloring. The fact that it also doesn’t have a dorsal fin helps confirm it is, in fact, a beluga whale. Domenic understands the uniqueness of the situation because he runs his own tour company called Gone Whale Watching San Diego.

“I want to stress how extraordinary that is,” he said with a big smile. “That would be like someone going out in their backyard and seeing a polar bear here in California. It just doesn't make any sense.”

Also strange is that the whale was by itself. Beluga whales are very social and usually travel in large pods.

“This whale is really far away from where it should be and we don't really know why it's here,” said Regina Guazzo, who earned her PhD in Oceanography from Scripps Institution of Oceanography.

Regina said the coloring tells her it's a mature whale, but said it's hard to tell from the video if the animal is trouble. She also warned that only scientists should try to get close.

“If you do end up seeing the whale, keep your distance from it," said Regina. "We don't want to stress it out.”

Experts from Alaska said it appears to them that the whale did not escape from captivity, but instead is what they call an "explorer" who wandered off from a pod in the wild. The good news is that there is a lot of food for it in our water so, if it's healthy, it definitely has a chance to survive.

“For the most part, it looked pretty good,” Domenic added. “It was slightly thin, but not dangerously so in any way whatsoever."

The hope now is that it will eventually turn around and head home. In the meantime, anyone who spots the wayward whale is asked to call the NOAA Fisheries West Coast Marine Mammal Stranding Network.