Four dolphins in the Navy Marine Mammal Program were infected in Spring 2019. 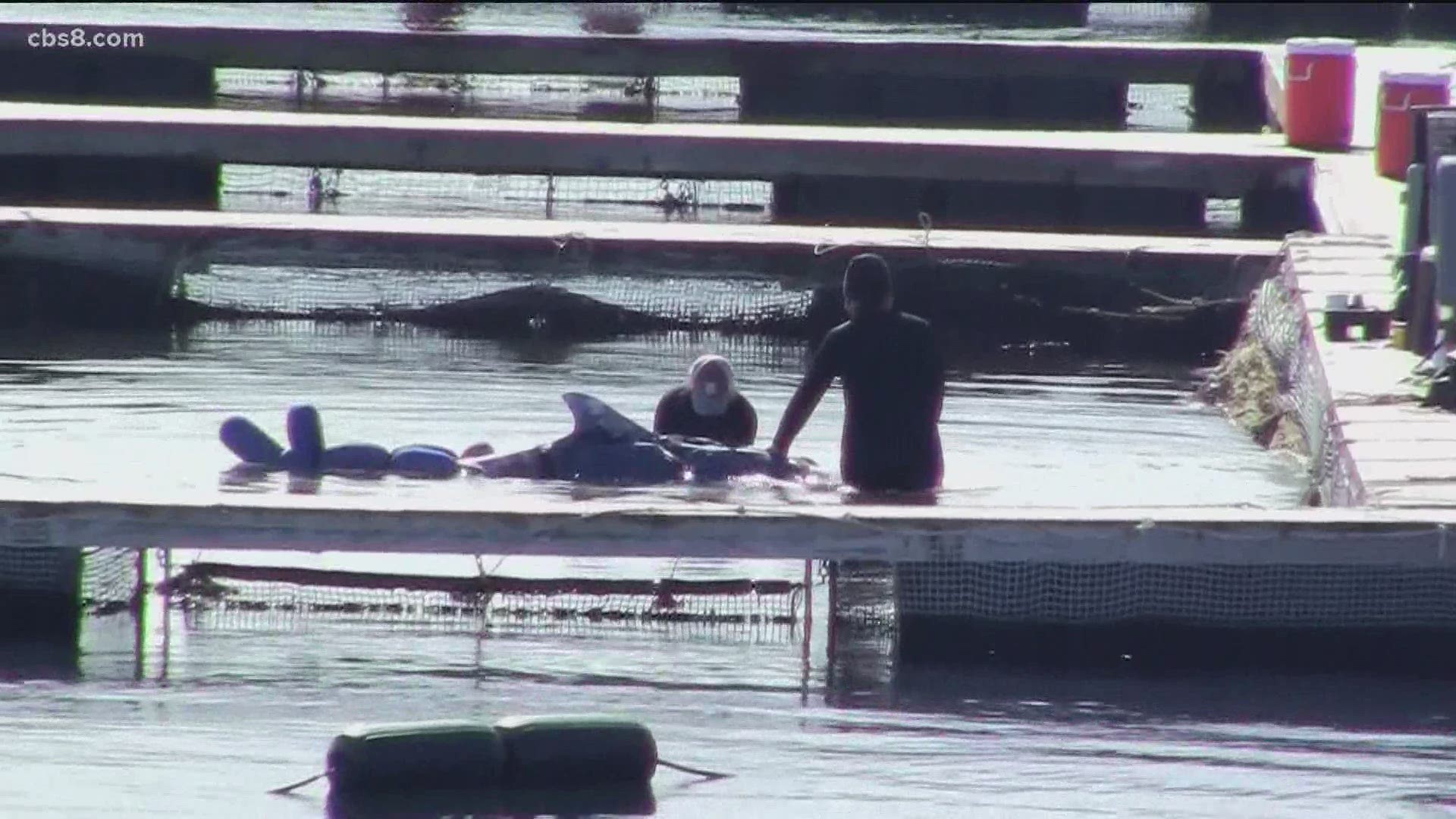 SAN DIEGO — There is a new coronavirus outbreak to report, not in humans but in Navy dolphins kept in captivity on San Diego Bay.

The outbreak in the U.S. Navy Marine Mammal Program (NMMP) happened in Spring 2019 and infected four dolphins.  The animals were sick and lethargic with diarrhea and lack of appetite, according to a July 2020 research letter published in the Emerging Infectious Diseases journal.

Fecal samples underwent genome sequencing at the University of Illinois and the virus was confirmed to be a novel gamma coronavirus.

Similar coronaviruses have been found in captive dolphins in Hong Kong in 2014, and in a captive beluga whale in San Diego in 2008.  However, this new coronavirus appears to have mutated.

“The virus may evolve through the years, and it's become the new, new virus,” said Dr. Leyi Wang, an author of the research letter who works as a veterinary virologist at the University of Illinois.

“It's different from the Hong Kong dolphin coronavirus.  The genome itself is different,” said Dr. Wang.

“This virus is much different from the virus identified in humans, like the current SARS COVID 2,” Dr. Wang said.

Dozens of sea lions and bottlenose dolphins currently are kept in pens in San Diego Bay and trained for military purposes, as part of the Navy Marine Mammal Program.

Rick Trout used to work with the NMMP in the 1980s.

“There’s no coronavirus of that kind that I’m aware of out in the wild,” said Trout.

Trout said he had concerns about the virus being transmitted to other marine mammals in the Navy program, or to marine mammal populations in the wild.

“The good news is, it sounds like the animals survived.  That doesn't mean that it's going to be something that they can keep from happening, and ultimately pass on to other captive animals that are in Coronado or the wild population in San Diego Bay,” Trout said.

“The real question is, where did this come from?  How did this start?  Is this like we accuse the folks in China in a laboratory of creating the coronavirus?  It's a real question that needs answers,” Trout said.

Dr. Wang, the veterinary virologist, said military veterinarians and dolphin caretakers at the National Marine Mammal Foundation in San Diego likely took steps to prevent the virus from spreading to other mammals.

“The diarrhea, you know, if it contaminated in the water, it could be spread to the other healthy animals.  They should try to isolate these animals from the healthy animals, that's the best procedure,” Wang said.

In a statement to News 8, CAPT Kyle Ross, U.S. Army Veterinary Corps wrote, “The new virus we discovered is closely related to other coronavirus found in whales and dolphins, but not the novel coronavirus linked to the COVID-19 pandemic in humans. The Navy marine mammals that displayed relatively mild clinical signs described in the paper all made a full recovery.”

Mark Palmer, an associate director with the International Marine Mammal Project of Earth Island Institute in Berkeley also had concerns.

“There have been a number of coronaviruses apparently identified in marine mammals, which poses a threat, especially in a captive situation,” said Palmer.

The International Marine Mammal Project opposes the Navy program because of the captive environment.  Palmer would like to see the NMMP shut down.

“The program really should be closed down on behalf of the dolphins.  And, they should be retired to seaside sanctuaries basically, much bigger enclosures where they can be dolphins and no longer be weapons used by the United States,” Palmer said.

Dr. Wang said he would like to see future research to determine whether any of the Navy marine mammals have developed antibodies to the new gamma coronavirus strain.

Wang said an antibody test could show whether more of the Navy dolphins were infected but asymptomatic, and ultimately recovered.