In exchange for his pleas, 22-year-old John Earnest is expected to be sentenced on Sept. 30 to life in prison without the possibility of parole. 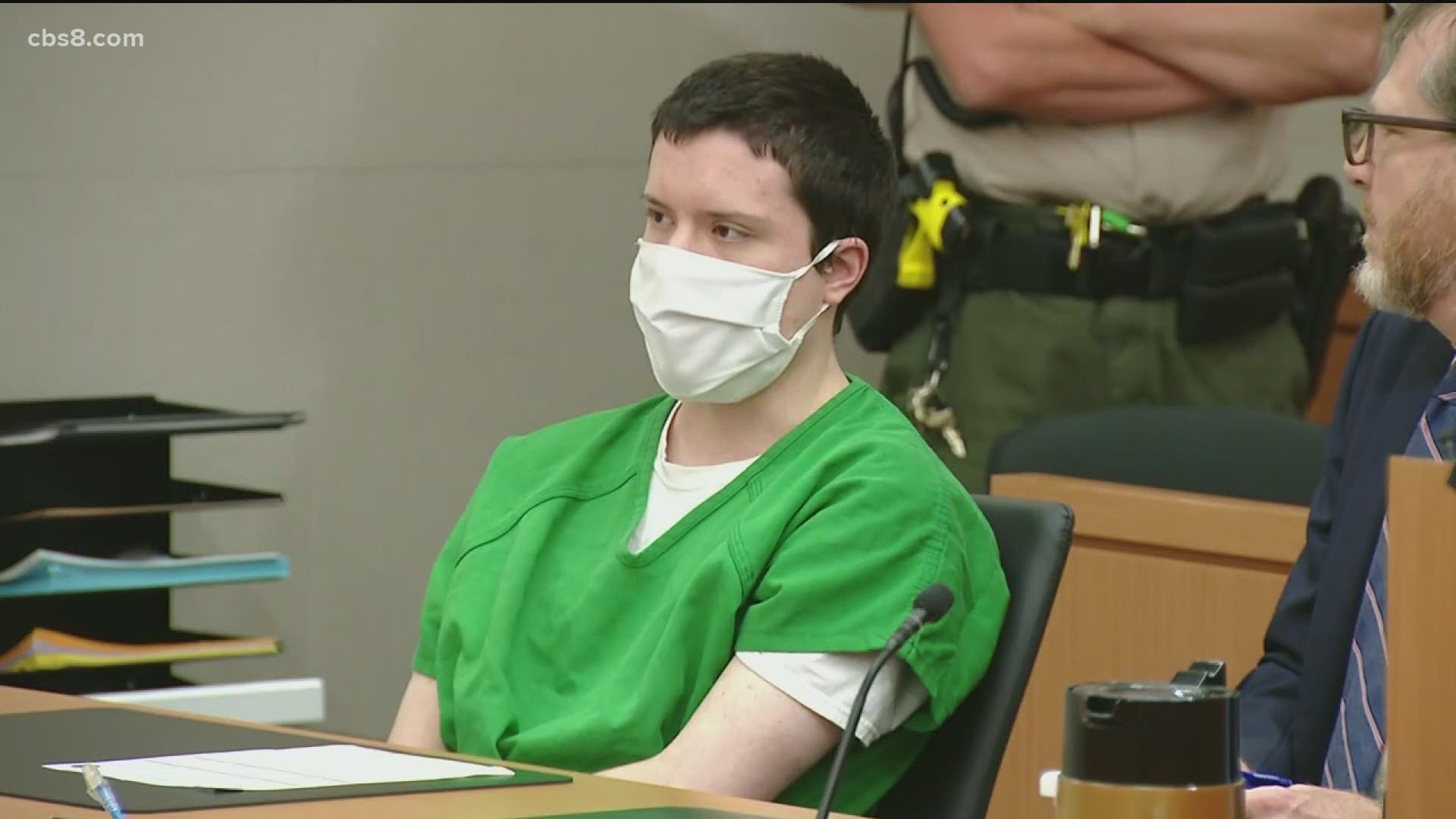 SAN DIEGO COUNTY, Calif. — John Earnest, who carried out the April 27, 2019 shooting at the Chabad of Poway synagogue that killed one woman and injured three other people, pleaded guilty in San Diego Superior Court Tuesday to murder and other state charges.

In exchange for his pleas, 22-year-old Earnest is expected to be sentenced on Sept. 30 to life in prison without the possibility of parole, plus 137 years to life, for the shooting. He also pleaded guilty to an arson charge for setting fire to the Dar-ul-Arqam Mosque in Escondido on March 24, 2019.

He previously admitted to both the shooting in which he killed Lori Kaye, and the mosque fire in an online open letter in which he espoused flagrant anti-Semitic sentiments and a need to protect the "European race."

State prosecutors announced last year that they would seek the death penalty against Earnest, but capital punishment will no longer be pursued by the state in light of his pleas to all charges and allegations filed against him, which include hate crime allegations specifying that the crimes were carried out because of the victims' race.

Matthew Brown, Associate Director of the Anti-Defamation League San Diego Regional Office says the life sentence puts to bed a nasty, hurtful, painful chapter for not just the Chabad of Poway but other Jewish institutions.

“The guilty plea, no, I am not surprised with it, obviously, the individual was potentially facing the death penalty. The case wasn't only treated seriously as a homicide and attempted homicides, but it was treated seriously as a hate crime that impacts a significant community as not just antisemitism but other forms of hate are on the rise,” Brown said.

Last month, Earnest agreed to a conditional plea agreement on federal charges stemming from the shooting, though federal prosecutors said at a June hearing that the plea agreement still required approval from "the appropriate decision-makers," who will determine whether to accept or reject it, meaning Earnest still could go to trial on more than 100 federal counts.

Deputy District Attorney Leonard Trinh, one of the state's prosecutors handling Earnest's case, said the District Attorney's Office moved to resolve the case in light of the federal plea, which could have triggered the state's double jeopardy clause preventing state defendants from being prosecuted for the same offense in two different courts.

The clause does not prevent the federal prosecution, however, from potentially going forward. The U.S. Attorney's Office may also seek the death penalty in its case, but has not yet made a decision on capital punishment.

"While we reserved the option of trying this as a death penalty case, life in prison without the possibility of parole for the defendant is an appropriate resolution to this violent hate crime and we hope it brings a measure of justice and closure to the victims, their families, friends and the wider community. After consulting with the Kaye family and the many victims impacted by the shooting, the decision to accept a plea of life in prison was made in the interest of justice and with the knowledge that a parallel prosecution by the U.S. Attorney's Office and possible plea in that case would prevent the state's case from moving forward," she said. "This plea ensures the defendant is held accountable for his crimes under California state law."

A former Rancho Penasquitos resident and Cal State San Marcos nursing student, Earnest admitted to carrying out the shooting on the last day of Passover, fatally wounding 60-year-old Lori Gilbert Kaye, who was shot twice in the synagogue's foyer. Kaye, a longtime member of Chabad of Poway, was at the temple with her husband and daughter to honor her mother, who had recently died.

The congregation's rabbi, Yisroel Goldstein, lost a finger in the shooting. Two other people -- Almog Peretz and his then-8-year-old niece, Noya Dahan -- were also injured.

Prosecutors say 54 people were inside the synagogue when Earnest opened fire.

Surveillance footage from the date of the crime appears to show the shooter's rifle jam or malfunction after he entered the synagogue and began firing. He then fled the scene after being chased out by congregants, drove a short distance away, called police and directed them to his location, where he was arrested.

In addition to state and federal prosecutions, the shooting triggered a series of lawsuits from the victims of the shooting against Earnest, the Chabad itself, the gun store that sold Earnest the weapon and gun manufacturers.