SDPD officers shot and wounded 25-year-old Keith Bergman Sunday after they said he slipped handcuffs and grabbed an officer's backup gun firing at least one round. 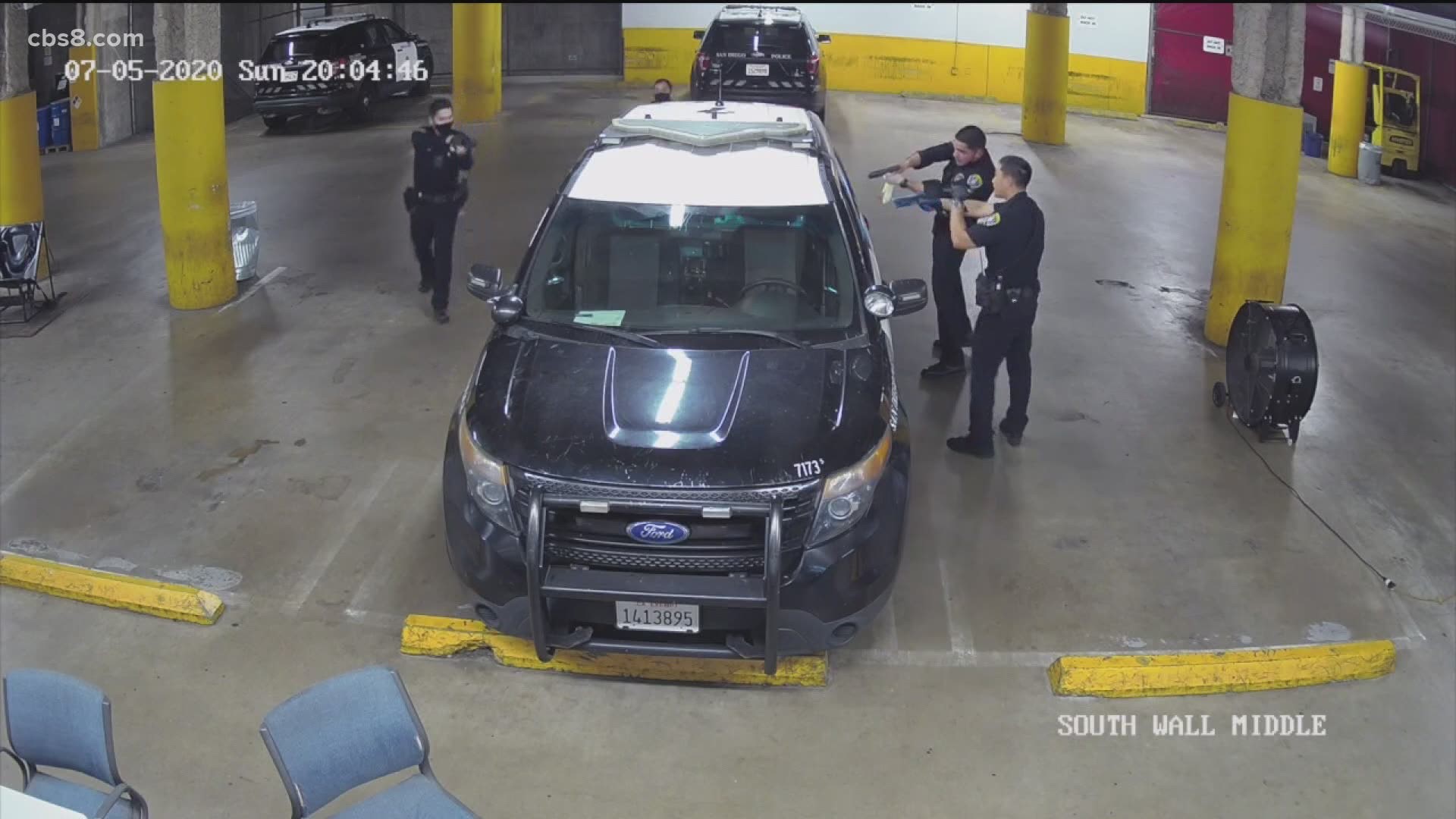 SAN DIEGO — Content warning: The video in this story contains graphic images and explicit language. It may not be suitable for all viewers.

The San Diego Police Department on Wednesday released video footage of an officer-involved shooting that took place Sunday in the sally port of SDPD headquarters located in the downtown area. During the incident, SDPD officers shot and wounded a 25-year-old man - later identified as Keith Bergman - who they said slipped handcuffs and grabbed an officer's backup gun firing at least one round.

"The San Diego Police Department is committed to being open and transparent with the public," the department said in a statement released with the video.

Police said the incident took place after they received a 911 call around 6:20 p.m. Sunday about a man causing a disturbance at a downtown hotel. He was reportedly pepper-sprayed and held down by hotel security after threatening to stab hotel staff.

Officers placed Bergman under arrest after evaluating him for being under the influence. SDPD said methamphetamine and multiple credit cards not belonging to Bergman were found in his pockets.

Bergman was taken to police headquarters in the 1400 block of Broadway for processing. About 8 p.m., while in a police vehicle inside a parking/detainee-processing area of the facility, he reportedly slipped one hand free from handcuffs, broke a plexiglass barrier and retrieved a backpack in the rear area of the car that contained an officer's back-up handgun.

The footage released by SDPD includes security camera video that starts when Bergman was inside the vehicle alone. An officer hearing a commotion is seen opening the door where the department said she found him free of his handcuffs.

Other officers approach and see Bergman holding the gun. Next, they reportedly attempted to persuade him to drop the weapon. There is no audio on the security footage.

Body-worn camera footage is also included in the video released by SDPD reportedly showing the same time frame as the security camera footage. Audio is included in part of the footage and the officers are heard telling the suspect they want to see his hands and warning that they do not want to shoot him.

The officers back away from the vehicle and Bergman appears to fire a round out the back of the patrol car. Security camera footage shows debris flying as the bullet comes through the back glass window.

Two officers then fire their service weapons which was captured on a body-worn camera of an officer positioned at the rear of the vehicle. According to police, the first shot heard was the suspect's round from inside the car with the officer's rounds coming after.

According to police, several minutes went by after the shots were fired.

On security footage, Bergman is then seen opening the rear driver's side door from inside. He exits bleeding with the backpack and handgun in his waistband. After failing to open the rear hatch Bergman moves to the driver's side front door and an officer fires three more rounds at him. As he tries the door again a fourth round is fired.

A K-9 was deployed shortly after and Bergman was once again taken into custody.

Body-worn camera footage shows the same time frame after the suspect exits the vehicle. The officers are again heard telling Bergman to show his hands. He is told to move away from the vehicle and another officer shouts that the gun is in his waistband.

"Don't reach for the gun," an officer is heard shouting before the K-9 is deployed subduing the suspect.

A portion of the video is highlighted to focus on the gun tucked into the suspect's waistband.

SDPD said once the handgun was secured officers administered first aid until paramedics arrived. Bergman was transported to a hospital with non-life-threatening injuries.

Bergman was booked into San Diego County jail upon his release from the hospital, according to police.

SDPD homicide detectives are investigating the case, which is standard in cases involving officer shootings, whether or not they result in loss of life.

Once that probe is complete, the county District Attorney's Office will review the findings to determine whether the involved officers bear any criminal liability for their actions.

In a release Wednesday night identifying the suspects and officers, SDPD said in part:

"The Internal Affairs Unit will conduct an investigation to determine if there were any policy violations, and the Shooting Review Board will evaluate the tactics used by the officers. The Community Review Board on Police Practices will conduct a review of the incident and provide any appropriate recommendations. The Federal Bureau of Investigations and the United States Attorney’s Office will also be monitoring the investigation."