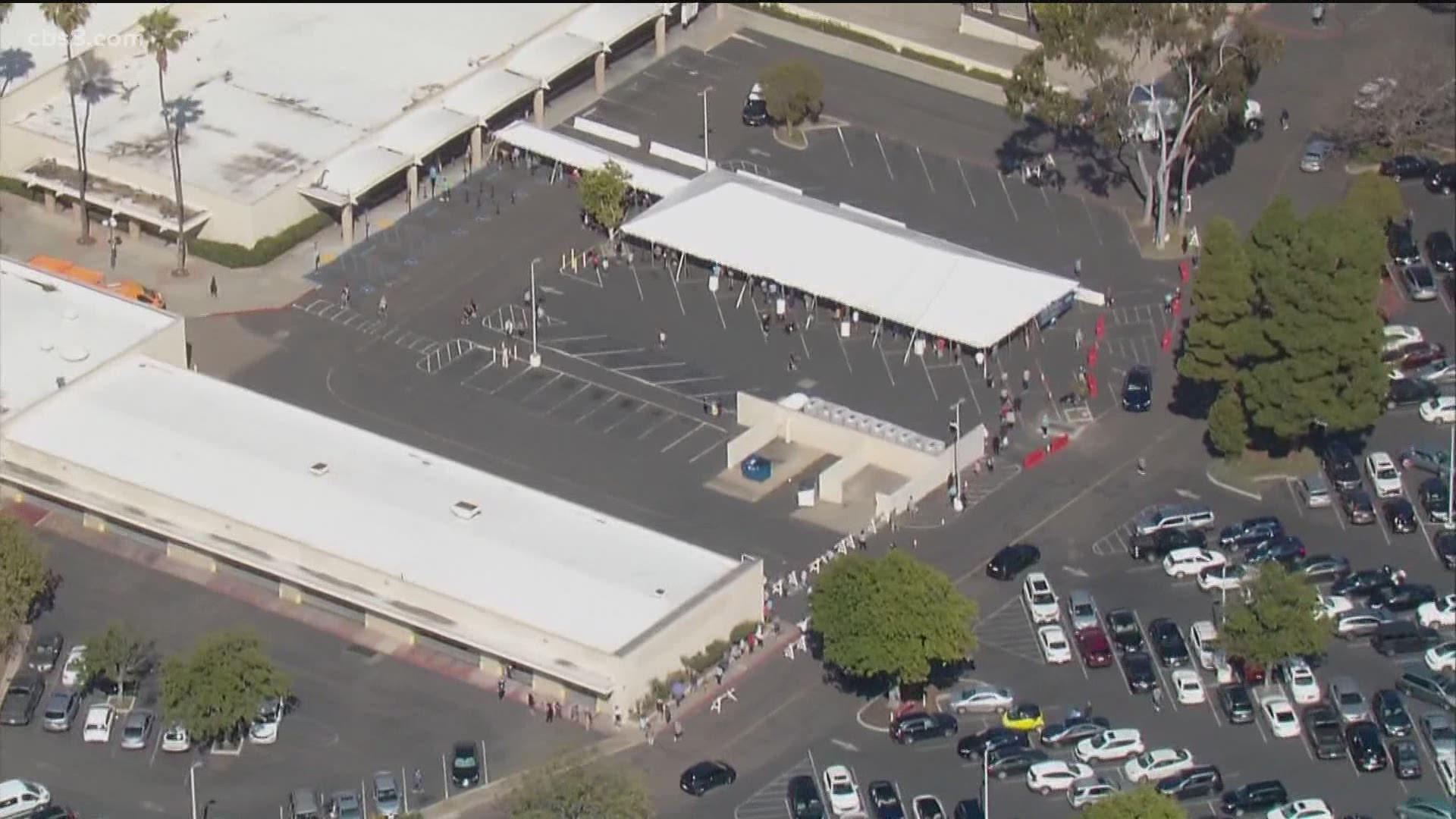 SAN DIEGO COUNTY, Calif. — San Diego County officials said Wednesday that those in the school and child care, food and agriculture and other non-medical emergency responder sectors can get their COVID-19 vaccinations starting this weekend.

Starting Saturday, the vaccination pool will open for about a half-million more people, though Supervisor Nathan Fletcher cautioned that appointments would not be immediately available to everyone who qualifies.

"We need folks to be patient," Fletcher said, adding that the county will prioritize K-12 schools in ZIP codes hardest hit by COVID-19.

As part of efforts to spur the reopening of schools, Fletcher said 20% of vaccine doses will be prioritized for teachers and school staff, as opposed to the 10% outlined by state leaders.

The county will set up appointments directly with K-12 school districts, Fletcher said, while all others who fall into phase 1B -- including education and child care workers outside of K-12 campuses -- can schedule appointments through typical public means such as the county's website.

County case rates have been declining at an encouraging rate, officials said, signaling a potential drop in the near future to the red tier of the state's reopening plan.

Fletcher said more than 783,000 vaccines have been administered in the county so far, including nearly 68% of seniors vaccinated, and one in five San Diegans have received at least their first doses.

"We're getting vaccines in arms at a very impressive rate," Fletcher said.

This week, a new vaccination site also opened in Otay Mesa and an inoculation "super station" at Petco Park reopened following a five-day closure caused by weather-related delays in shipments of doses.

The site at the San Diego Padres' downtown ballpark -- San Diego County's largest inoculation center -- had been closed since Thursday, with severe weather that affected much of the nation delaying shipments of vaccine from the Midwest and East Coast. Petco Park uses only the Moderna vaccine, while other sites use Pfizer, or both.

Appointments for second doses of the vaccine Friday through Monday were canceled and will be automatically rescheduled, UC San Diego Health officials said. People who had appointments were asked to check the MyUCSDChart website for updates.

Nearly 80,000 storm-delayed vaccine doses began arriving in the San Diego area Tuesday night, allowing for the rescheduling of all missed second doses and the widespread resumption of first-dose appointments, according to county officials.

The vaccine quantities represent the doses expected this week and those delayed last week by severe winter storms elsewhere in the United States.

The new Otay Mesa vaccination site will administer doses from 9:30 a.m. to 3:30 p.m. and be open Sunday through Thursday at the Border View Family YMCA, 3601 Arey Drive. The clinic will start with a capacity to administer up to 500 doses daily, but can expand to 1,000 shots each day.

Additionally, the San Diego Fire-Rescue Department has begun scheduling appointments for a vaccination station at Balboa Municipal Gym, 2111 Pan American Plaza in Balboa Park. Time slots are available for Wednesday, Thursday and Friday and can be secured online at www.sandiego.gov/covid-19- vaccination.

On Sunday, a site will open in Lemon Grove, operating from 9:30 a.m. to 3:30 p.m. Sundays and Mondays. The site will be at the Lemon Grove Community Center, 3146 School Lane. When fully operational, the Lemon Grove clinic will be able to administer 500 doses daily.

The county's adjusted rate of daily new COVID-19 cases dropped to 15 per 100,000 residents, according to state data released Tuesday. The county is still in the most restrictive purple tier of the state's four-tier economic reopening system.

To move out of purple and into the less restrictive red tier, the county's new case rate must drop to seven per 100,000 residents. The county's seven-day average positivity rate already qualifies for the red tier, at a state-adjusted 5%, but the county must meet all required metrics before advancing out of the purple tier.