The Celebrity Eclipse arrived in San Diego Monday just after 5 a.m. Hours later, passengers who had been screened were allowed off, happy to finally be on dry land. 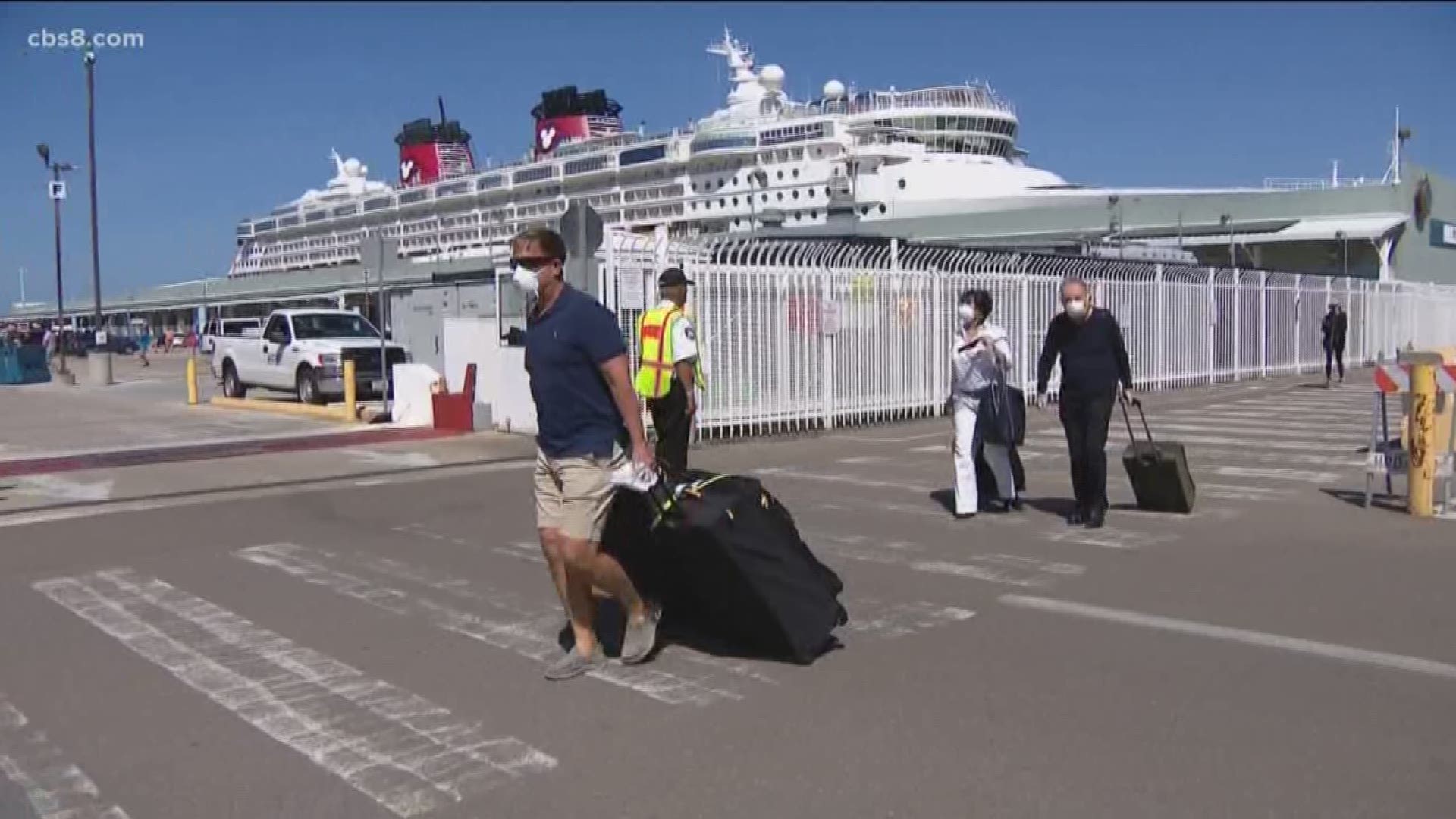 SAN DIEGO — Thousands of people disembarked the Celebrity Eclipse cruise ship in San Diego Monday morning, hours after docking at the B Street Pier. Many of its passengers had been aboard a month due to restrictions put into place at ports around the globe due to the coronavirus/COVID-19 pandemic.

The majority of the 2500 passengers had disembarked as of Monday night. No one has shown any signs of Covid-19. They all had to be screened before being allowed off.

The Celebrity Eclipse arrived in San Diego Monday just after 5 a.m. Hours later, passengers were allowed off, happy to finally be on dry land.

Carlos Gomez of Chula Vista boarded the massive ship in Buenos Aires on March 1. It was supposed to be a two-week cruise, ending in Chile on March 15

But, due to the Coronavirus pandemic, ships weren't allowed in Chile, so the Eclipse continued on to San Diego, extending people's voyage by another two weeks.

Despite the longer than expected journey, passengers who spoke with News 8 said they felt safe on board, noting how hard the crew worked to ensure everything was clean.

"A lot. I think somebody said they saw 50-100 people cleaning daily. Everything on the surface was cleaned as we were clearing," said Arjun Punshi of Scripps Ranch who shared pictures with News 8, along with a flyer handed out to passengers.

He's among those who spoke highly about the experience.

Adding, for the non-San Diego residents who didn't anticipate coming here, the cruise line is flying them home for free.

"I think we all wanted the cruise to end when it should have, but because it didn't, we had no control, so we did what we could," he said.

Cruises around the globe have halted operations.

While no one onboard the Eclipse is thought to have COVID-19, other ships have reported combined hundreds of cases.

Despite that, industry expert Stewart Chiron says cruises will be just as popular when things go back to normal.

"There's people that will go tomorrow.  It's just a question right now of getting them back into position," he said.

Though, Chiron does expect new safety measures will be put into place.

"I know cruise lines are working with the CDC so we don't see the disruption, the quarantines," he said.

Ports are already doing the same. In San Diego, hand washing stations have been added, and the ship terminal has been disinfected.

In addition, cruise ships must communicate with the CDC before arriving, ensuring all passengers have been screened and no one is sick.

Passengers are also being asked to self-quarantine for 14 days once they get home.

The ship will be in San Diego until Tuesday night, and after it will head to Mexico to disembark the remaining 213 passengers.

Local officials said it’s the final ship scheduled to arrive here for the foreseeable future. On Monday, the county of San Diego added a public health order saying after March 31, 2020, no cruise ship will be allowed to dock and have those on board disembark, according to Dr. Eric McDonald, the county's medical director of epidemiology. He said with approval by the health officer, a ship may dock to receive fuel and provisions as long as no one on board disembarks.

RELATED: Coronavirus: Helping those with Alzheimer's through social isolation