Nearly a quarter of local community outbreaks were at bars and restaurants with private gatherings inside homes the second most common source. 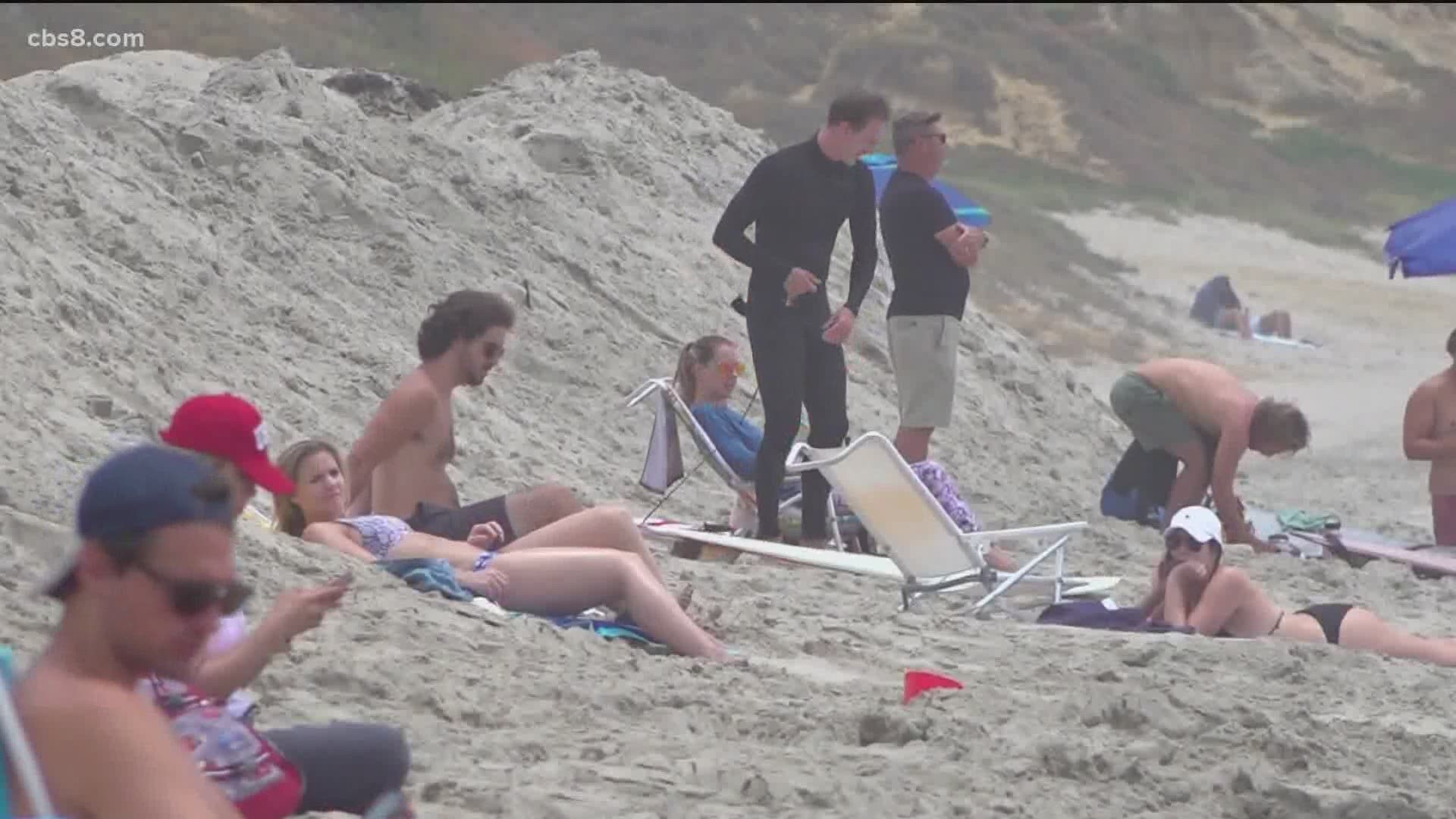 SAN DIEGO COUNTY, Calif. — San Diego County does not plan to close its beaches for Fourth of July weekend, bucking a trend among some Southern California counties. Los Angeles County closed its beaches this week amid an increasing number of positive coronavirus cases.

There have been 26 community outbreaks of coronavirus in the county, which is when tracers find three or more positive cases from different households are linked to a common setting. Nearly a quarter of all outbreaks were at restaurants and bars, the latter were ordered to close starting Wednesday. Restaurants that serve alcohol are also restricted and must close by 10 p.m., according to the latest public health order updates.

Private gatherings inside homes were the second most common source of community outbreaks, followed by retail settings and businesses.

All outbreaks occurred indoors, which is why the county does not plan to close beaches.

“Despite calls from some to close the beaches, we do not feel the public health data supports that action,” explained Supervisor Nathan Fletcher.

Individual coastal cities can decide to close their beaches but as of Tuesday none had opted to do so.

Health officials are still urging people to take precautions and are required to wear a face covering.

Early on, men were contracting the virus more than women at a 2:1 ratio. However, women, especially those under 40, have since caught up and surpassed the total number of men with the virus.

There are 1,216 hospital beds reserved for patients with coronavirus, representing 20% of the county’s hospital beds. Even with the reserved beds and recent spike, hospitals still have excess capacity for other ailments. However, since hospitalizations tend to occur several days after a person tests positive, and ICU admissions even later, health officials are closely watching to see how numbers change during this spike.

County data shows the rate of infections is growing faster in North County communities, although the South Bay still has the highest total number of cases.

As of Sunday, the 92154 zip code, which includes Otay Mesa, had the most cases at 978. Chula Vista’s 91211 and National City, 92154, followed with 830 and 645 respectively. However, cases in these communities spiked early on and have been the focus of the county’s T3, testing, tracing and treatment, strategy. National City opened its fifth testing site on Tuesday.

“We want to make sure the demand is met, and we want every single day to be full. Today was the first day and 144 appointments were filled for today,” said Mayor Alejandra Sotelo-Solis, who points out her city was the first in the county to require face coverings.

Some communities that initially had fewer cases are now seeing numbers increase as more businesses reopen. As of June 28, cases in Fallbrook were up 64% compared to the previous Sunday. San Marcos saw cases increase 56% and cases in Coronado were up 52%, more than double the county overall, which was up 25%.

Health officials point out the data only shows where a person lives, not necessarily where they contracted the virus. They maintain using a face covering, washing hands and limiting exposure are the best ways to stay healthy.

See below for commonly asked COVID-19 questions and their answers:

Who is getting sick?

The median age of confirmed cases is 42 years old as of June 23. That’s down from 46 two months ago – meaning more younger people are contracting it.

However, the median age of deaths is still 78.

Lately, more young women are testing positive, but the virus is slightly deadlier among men.

Is race a factor?

Latinos and Pacific Islanders are testing positive at a rate four times higher than whites or Asians.

Health officials say some are more likely to have underlying health conditions that affect the severity of the disease.

Are we at risk of overwhelming hospitals with more people testing positive?

The number of people in the hospital with coronavirus is increasing. The county has reserved 80% of hospital beds for patients with the disease, but there has been plenty of capacity so far.

Statistically, while younger people have been getting the virus, they are most capable of surviving.

Where are the recent cases happening?

Over the past month, cases are four times higher in Fallbrook and more than doubled among residents of every city except Chula Vista, Del Mar, El Cajon, La Mesa, National City and San Diego. Countywide, cases increased 84% since May 30.

Health officials point out data only tracks where people live, not where or how they contracted the virus.

Tracers have accepted there is wide community spread of the virus, which is why face coverings and handwashing are essential to curbing it.

Where are outbreaks occurring?

There have been 26 outbreaks. Six occurred in bars, five inside private homes, four at retailers, three inside businesses, two at manufacturing locations, and one each at a campground, a military base, a construction company, a community organization, a healthcare site and a grocery store.

Have the recent protests spread the virus?

No. Tracers have not connected any outbreak to an outdoor place or event, such as a protest or the beach.