About 200 - 300 people rallied with U.S. flags and protest signs in Pacific Beach most not following social distancing orders or wearing facial coverings. 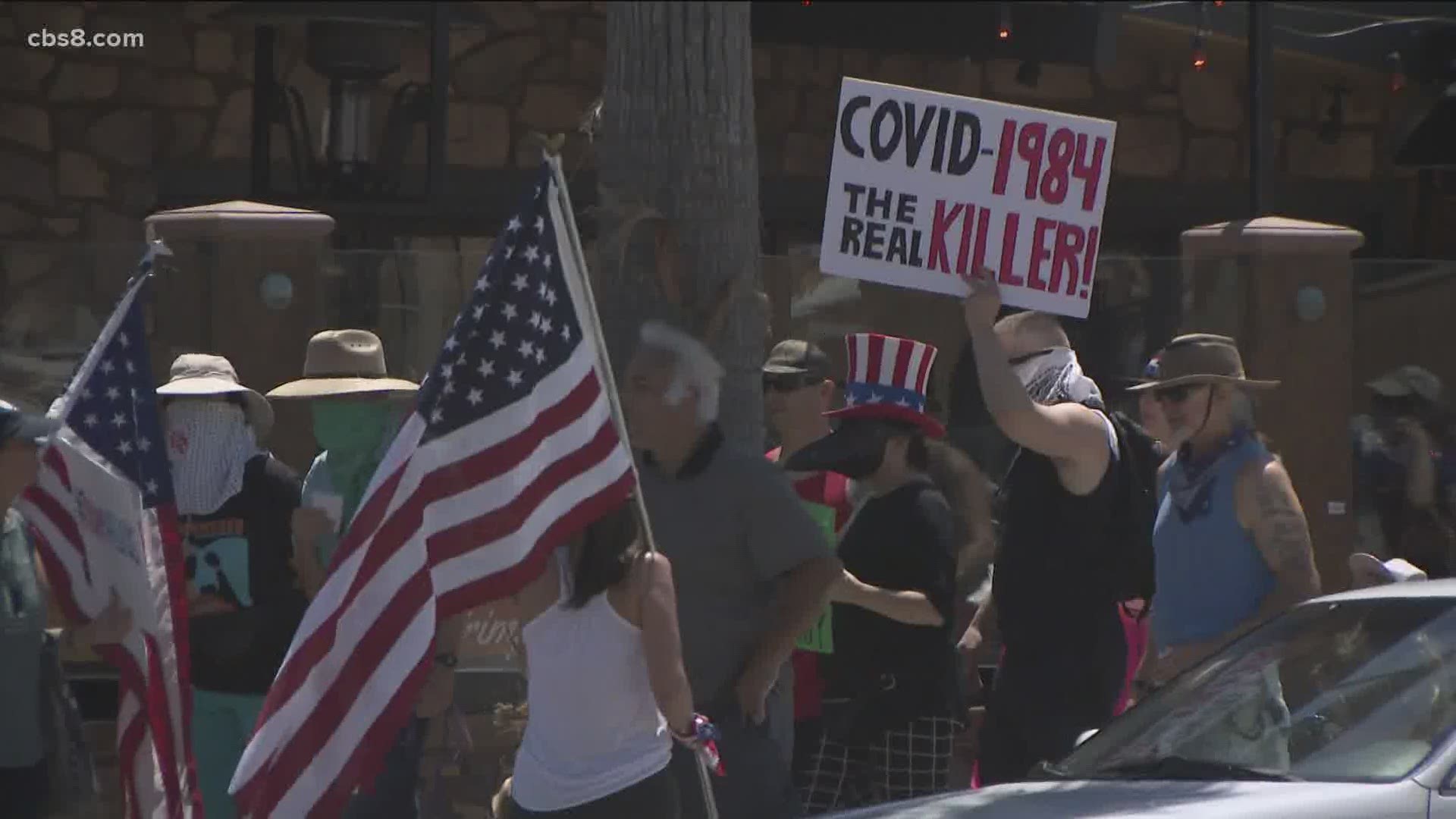 The limited reopening of San Diego ocean access and beaches is set to begin on Monday morning, but protests against stay-at-home orders still continued Sunday across the county. One protest began at 1 p.m. at the main lifeguard tower in Pacific Beach. About 200 - 300 people rallied with U.S. flags and protest signs, according to the San Diego Police Department, most were not following social distancing orders or wearing facial coverings.

It was not immediately known whether anyone was cited for violating the stay-at-home order or congregating on a closed beach.

Protesters carried signs such as "COVID is a LIE" and "PB IS OPEN."

The protest began at 1 p.m. and people started to leave the area near the lifeguard tower after about half an hour, gathering at the corner of Mission Boulevard and Grand Avenue.

Another protest in Imperial Beach kicked off at the same time calling for the beach and local businesses to reopen.

Organizers of the IB rally said they would gather but remain six feet apart while calling on Mayor Serge Dedina and the city council to immediately “reopen the city.” The gathering was followed by a march along Coronado Avenue to the beach.

On Saturday, protesters at Moonlight Beach in Encinitas called for beaches to be opened immediately. Some walked beyond the yellow caution tape before either being warned or arrested by deputies and escorted off the beach. Three people were arrested and cited by sheriff's deputies during a protest. The three were cited for violating the stay-at-home order and congregating on a closed beach.

Over the intercom, deputies announced: “You are gathering in violation of the public health order,” to which the protesters shouted obscenities.

Last weekend, two rallies were held in San Diego against the stay-at-home orders and calling for the re-opening of public areas. The organizer of the Downtown San Diego “Freedom Rally” last Saturday and a similar protest in Encinitas last Sunday are both facing misdemeanor charges that carry up to a $1,000 fine and six months in jail.

On Friday, San Diego County Supervisor Nathan Fletcher announced that the county was amending the public health order to allow people to go into the ocean starting Monday morning. This means people can kayak, swim, and surf.

However, this doesn't mean people in San Diego County can spend time on the sand. It's up to individual cities to decide if they want to open up the actual beach on Monday morning.

Solana Beach, Del Mar and Carlsbad have decided not to open their beaches so far.

"Our police department will be there to ensure that everyone is safe and is following our social distancing orders. They are there for a reason to protect the public health. There is a balance that our police department does and I think does it very well," Faulconer said.

San Diego Police Department Cheif David Nisleit said he supports the right to protest, but noted that some beach restrictions will be lifted on Monday, and urged Sunday's protesters to stay at home and wait one day.