400-500 patients over the next year will take part in Scripps Health‘s clinical trial. Half the patients will get open heart surgery; the other half the MitraClip. 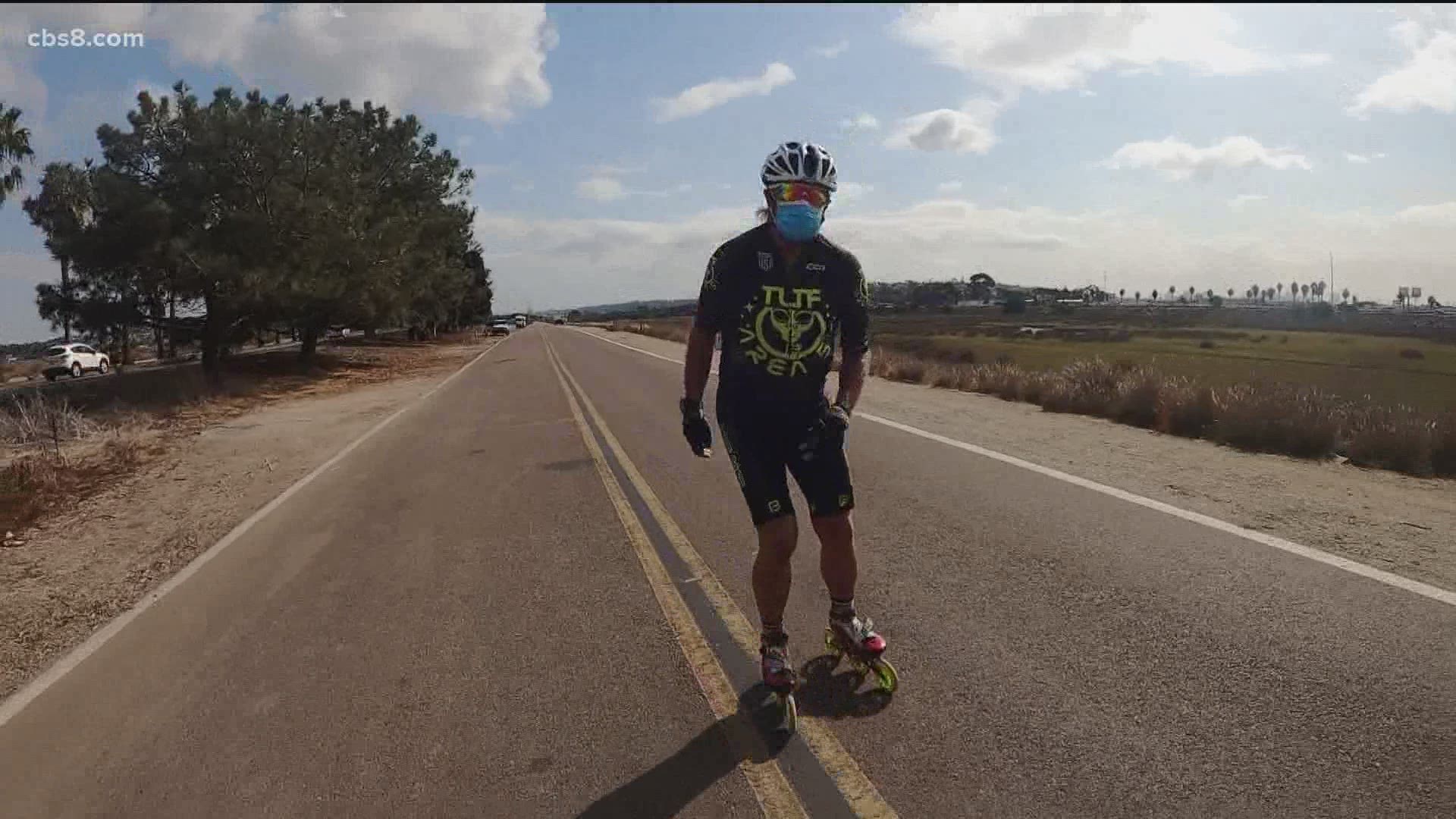 78-year-old Roger Olson was making impressive strides in his sport until a recent health speed bump nearly knocked him off his skates.

We skated along with Roger, who is fit, fast and focused, to learn how he overcame his latest heart surgery.

“I’ve been racing competitively now for over 23 years at a very high level,” Roger said, showing off his $2,700 inline skates, “I have good days, and I have great days, that’s about my life!”

Roger holds 5 racing records. He and his wife now live in an RV so they can travel to all of his inline skating competitions.

He can get up to 30 miles per hour on them, and at that speed, yes, wipeouts happen, and they hurt!

“Oh, I wipe out all the time! Road rash? We have an aloe plant we keep with us at all times,” Roger said chuckling.

After a big race in Minnesota a few years ago, it was no wipe out that put the brakes on Roger’s racing; he had a heart attack.

The quadruple bypass surgery knocked him off his skates for four months.

Then, while training recently, he got really dizzy.

“This pandemic gave me the ability to check into it further,” Roger said with a concerning look.

After consulting with cardiologists from Scripps Green Hospital, Roger found out he had a leaking mitral valve. It was causing his heart to work harder to pump blood through his body.

“He had a gradual decline in his exercise tolerance,” Scripps Dr. Matthew Price said.

Due to Roger’s past surgery, Dr. Price said he wasn’t a good candidate for another open-heart procedure. So, Roger opted for a minimally invasive catheter procedure using Abbott’s MitraClip device.

The clip is threaded through an artery in the leg, then up to the left atrium of the heart. It’s positioned to close part of the mitral valve.

“When the heart squeezes, when the valve is not competent, blood goes backwards to your lungs and you feel out of breath when you exercise,” Dr. Price explained showing the process on a model.

Dr. Price said a leaky heart valve that is not addressed can lead to major health complications and even death.

The MitraClip procedure has been around for a few years, but a new clinical trial launched by Scripps Health, the only one of its kind in Southern California, is looking into whether it should be more widely available to patients.

“We’re testing if we can treat younger patients who are not that sick, not having that many problems, to test if it’s as good as open-heart surgery,” Dr. Price said.

“You’ve got to look into this because this is incredible stuff!” Roger exclaimed.

Roger said his heart is doing fine and he feels as healthy as can be.

“I’ve just got to do the training,” Roger said.

Four to five hundred patients over the next year will take part in Scripps Health‘s clinical trial.

Half of the patients will get open heart surgery; the other half will get the MitraClip.

Dr. Price’s hypothesis is that patients will not only feel better after the clip procedure but get out of the hospital faster.

Strapped on the ol’ blades to keep up with this 78 year-old. The incredible ❤️ procedure keeping him on his skates! 6:30am on @CBS8 & 8:30am on @thecwsandiego pic.twitter.com/2x0PX5RVRy