The daily flights from the Rio Grande Valley began March 15 amid a surge of migrants and asylum seekers in Texas. 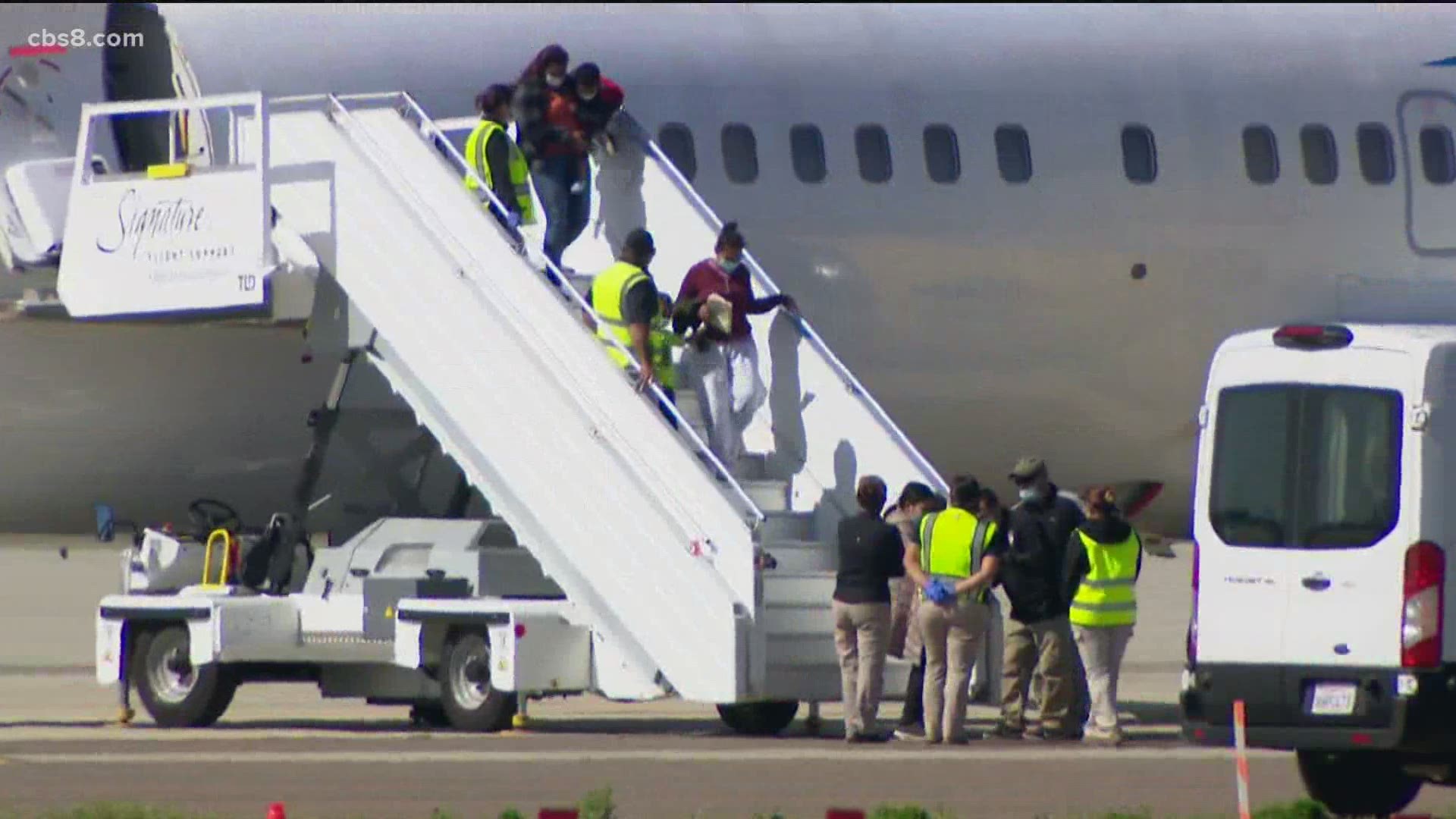 SAN DIEGO — U.S. Border Patrol has resumed flying migrant families from Texas to San Diego for processing after a nearly two-year hiatus. The program resumed amid a surge of asylum seekers along the southwest border, particularly in the Rio Grande Valley where the number of family units has more than doubled over this time last year.

San Diego was chosen in 2019 for a similar, three-month-long program because it has existing infrastructure, experience in processing families and has the capacity. Agents in the San Diego Sector encountered 13% fewer families compared to this time last year.

Border Patrol tells News 8 the first flight to San Diego was March 15 and has continued once or twice a day. Each flight has approximately 135 people on board.

“In order to process individuals as safely and expeditiously as possible, U.S. Border Patrol in San Diego Sector is assisting RGV by processing some of these subjects at our respective processing centers,” Customs and Border Protection told News 8 in a statement.

The flights are only for “family units,” which comprise of at least one child under the age of 18 and a parent or legal guardian. Once in San Diego, they are processed within 72 hours during which they may declare that they are seeking asylum.

During the previous surge along the border, asylum seekers would often surrender themselves to the nearest Border Patrol agent. However, CBS News reported the Biden Administration says most families will be sent back under pandemic guidelines from the Centers for Disease Control and Prevention.

CBP stressed to News 8 the border is not open, echoing a message delivered by Homeland Security Secretary Alejandro Mayorkas over the weekend.

Border Patrol said the fate of those flown to San Diego is made on an individual basis. It is not known whether families would return to Mexico in Tijuana or in border cities near Texas.

This effort is separate from an ongoing surge of unaccompanied minors that led San Diego officials to open the Convention Center as a temporary shelter for migrant children. Border Patrol reported San Diego Sector agents encountered 64% more children traveling alone over this time last year. Comparatively, the number of unaccompanied minors in parts of Texas has more than doubled.

"We've got to treat this issue in a way that is reflective of our values as Americans and do it in a way that is fair and is humane,” said Vice President Kamala Harris. “It's going to take a lot of work."

President Joe Biden is expected to visit the southwest border soon. He has indicated his administration wants to resume taking asylum applications in other countries, which would negate the need for families or children to come to the border.

“We're in the process of doing it now, including making sure that we reestablish what existed before, which was they can stay in place and make their case from their home country,” said Biden.

Two senior-level staff members are expected to travel to Mexico and Guatemala to discuss the policy changes.

More than 10,000 unaccompanied children from Guatemala have been caught along the southwest border since October 2020, surpassing the number that were caught during fiscal year 2020. More than 9,500 other children traveling alone were from Mexico.

Meanwhile, most family units are from Honduras. Agents have encountered 14,108 since October 2020, far less than they caught in 2019 when they apprehended than 180,000 from Honduras and Guatemala each.

WATCH: Asylum seekers finally allowed to cross in to U.S. from Mexico to await court hearings