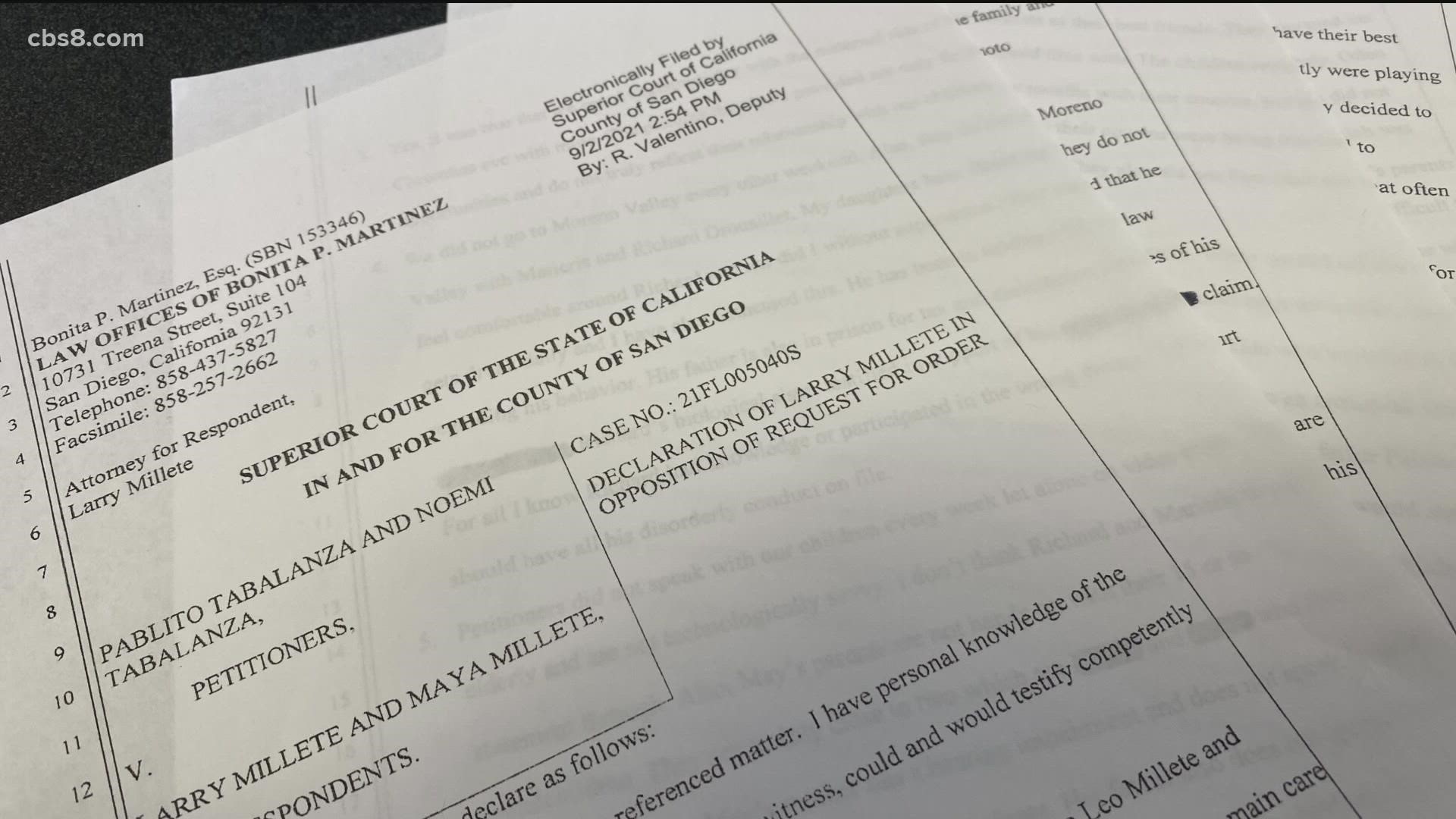 CHULA VISTA, Calif. — The husband of missing Chula Vista mother, Maya Millete, is firing back against his in-laws in a scathing declaration filed in family court.

Maya Millete’s parents, Pablito and Noemi Tabalanza, filed a petition in May seeking visitation with their three grandchildren.

In a nine-page declaration, filed Sept. 2 in Chula Vista family court by the husband, Larry Millete, he accuses his in-laws of everything from drunkenness and child neglect, to contaminating the family home with second-hand smoke.

“He's going guns blazing and trying to come up with every reason he can possibly think of to say that this visitation is a bad idea,” said San Diego family law attorney Anton Georghiou, who is not involved in the case.

“It's very over the top. I've been doing family law for over a decade, and this is one of the most aggressive declarations that I’ve read in a while,” said Georghiou.

The attorney reviewed the declaration, in which Larry Millete lashes out at his wife's sister and brother-in-law, Maricris and Richard Drouaillet.

“This is a desperate attempt to persuade the court to grant visitation rights to May's parents who [are] being used by Maricris and Richard Drouaillet to be able to harass and question our children regarding the disappearance of my wife and their mother,” the declaration said.

"My children have told me that their cousins were asking them inappropriate questions regarding our situation [at] the direction of their parents,” the document continued.

The family attorney questioned the legal approach the husband is taking.

“He's making statements about what his kids told him, about what someone else told their kids. It's actually double hearsay,” Georghiou said.

In the court record, Millete also claimed his wife was depressed.

"My wife May was going through some mental stress and health issues... Often times Richard and Maricris would encourage her to drink and get drunk which did not help with May's depression at all,” the husband wrote.

“I offered via my attorney that May's parents can come and visit our children for two or three hours at my residence or at the park,” the declaration said.

The family law attorney also reacted to that statement.

“If I was the judge sitting on this, I’d be like, ‘Well Larry you said that you were offering them three hours. You said that in your own declaration... Why don't I take you at your word that you're willing to offer them three hours a week, and I give them that?’” said Georghiou.

On the advice of their attorney, Maricris and Richard Drouaillet had no comment on the husband's declaration. A mediation hearing is set for next week in Chula Vista family court.

For several weeks, family law attorneys representing the grandparents had been unable to serve a court summons on Larry Millete.

On August 23, a proof of service was filed in family court indicating a San Diego County Sheriff’s deputy was successful in serving the court papers on Larry Millete at his home in Chula Vista.

Attorneys for the family also are asking the court to allow them to publish a summons notice of the family court case in a local newspaper, so that notice might be given to Maya Millete, in case the missing mother is still alive.

In their application for publication with the court, the attorneys filed a list of all the locations volunteers have searched for Maya Millete.

The mother of three has now been missing for eight months.