Lydia "Dia" Abrams went missing in June from her ranch near Idyllwild. 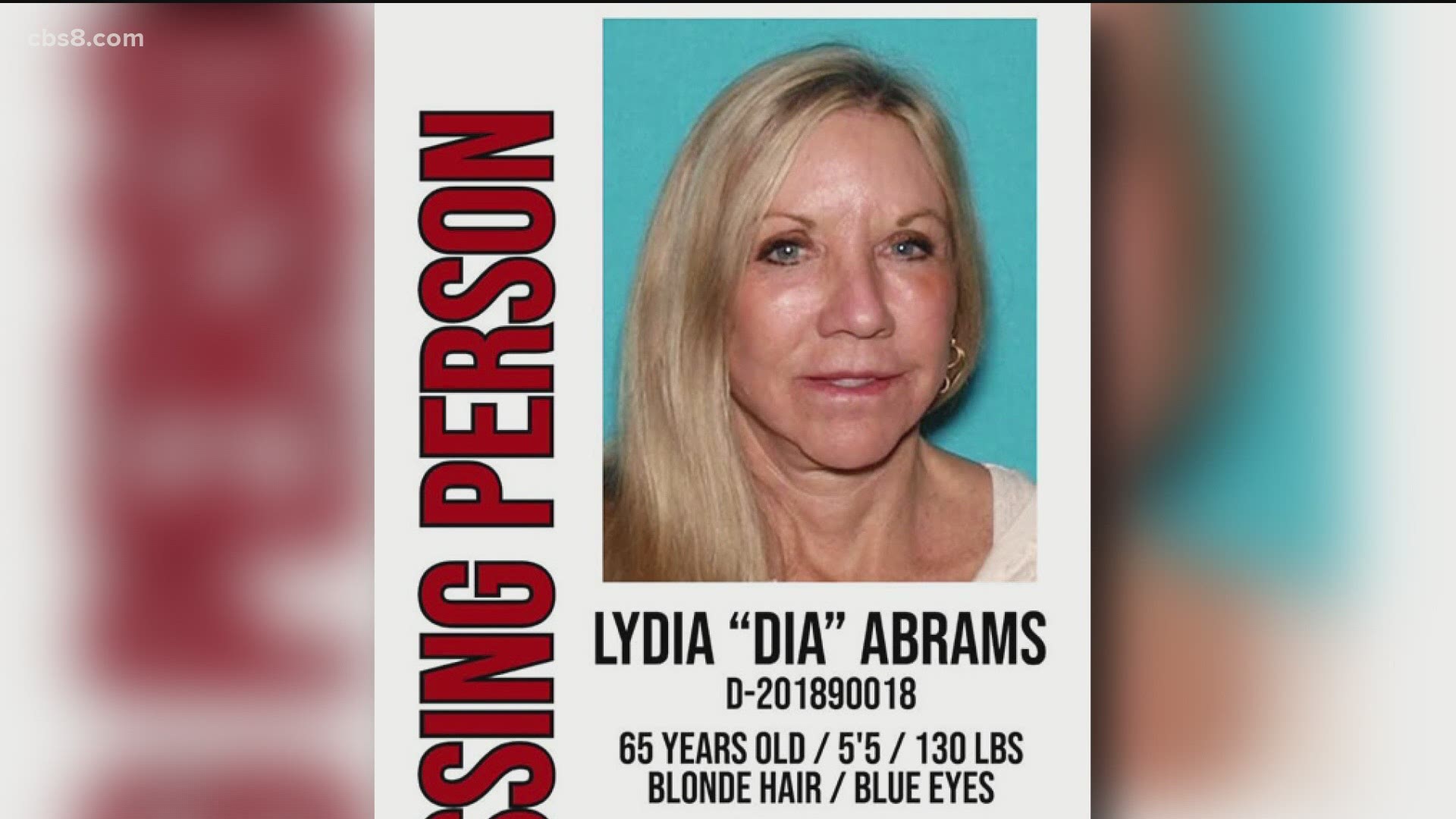 SAN DIEGO — The self-proclaimed fiancé of a woman who went missing from her ranch near Idyllwild in June has filed a lawsuit, in which he claims to have power of attorney over the woman’s estate.

Keith Harper, 71, filed the civil complaint in San Juan County, New Mexico on December 9.  It seeks $3,020 in damages – including court costs and interest – stemming from a $2,000 purchase of boots, made by Lydia “Dia” Abrams before she went missing.

The lawsuit confirms earlier reporting by News 8 that Harper has taken over as trustee, claiming power of attorney to run the estate.

Property records revealed that Abrams transferred ownership of her ranch, along with two nearby properties, into the restated Dia Kenshalo Abrams Trust two weeks before she went missing.

The written trust agreement has not been made public.

Harper’s lawsuit seeks a refund from Boot Junky of Scottsdale, Arizona.  Abrams was a frequent customer of boot outlet, according to the lawsuit.

“Ms. Abrams ordered boots from Boot Junky but never picked up her order,” the company wrote in a December 18 motion to dismiss the lawsuit.

“The transaction took place in Scottsdale, Arizona.  At the time, Ms. Abrams lived in California.  Ms. Abrams has since gone missing and has been missing since June 6, 2020,” the motion continued.

“Mr. Harper, the Plaintiff, has since tried to collect a refund from Boot Junky for the boots Ms. Abrams ordered.  Mr. Harper was never a party to the boot transaction that took place in Arizona,” according to the court records.

The owner of Boot Junky, Greg Swan, argues in his response that the New Mexico court has no jurisdiction over the transaction.

“Indeed, no New Mexico court would have jurisdiction over a transaction that took place between two non-New Mexico residents in Scottsdale, Arizona,” the response states.

San Juan County Magistrate Judge Stacey Biel set a motion hearing to be held on February 15, 2021, at 8 a.m., according to court records.  Keith Harper is representing himself in the legal action.

B. Tell Ward, the Farmington, New Mexico attorney representing Boot Junky, told News 8 in a telephone interview that Abrams' purchase consisted of several women's boots.  The attorney said the lawsuit "has no jurisdiction in New Mexico" because Harper filed it in the wrong state.

Harper previously told News 8 he had lunch with Abrams at the ranch on the afternoon of Saturday, June 6; and last saw her around 2:30 p.m., when he went to mow the grass and do some ranch work.

Upon Harper's return from his ranch work around 7:30 that evening, he said, Abrams was gone.  She had left her cell phone, purse and Ford truck behind.

The Riverside Sheriff’s Department is investigating Abrams’ disappearance as a missing persons case, and investigators suspect foul play, according to search warrants obtained in September by News 8.

Harper has not been named a suspect by law enforcement and he did not respond to a News 8 message seeking comment for this report.  Previously, Harper has denied any involvement in Abrams’ disappearance.