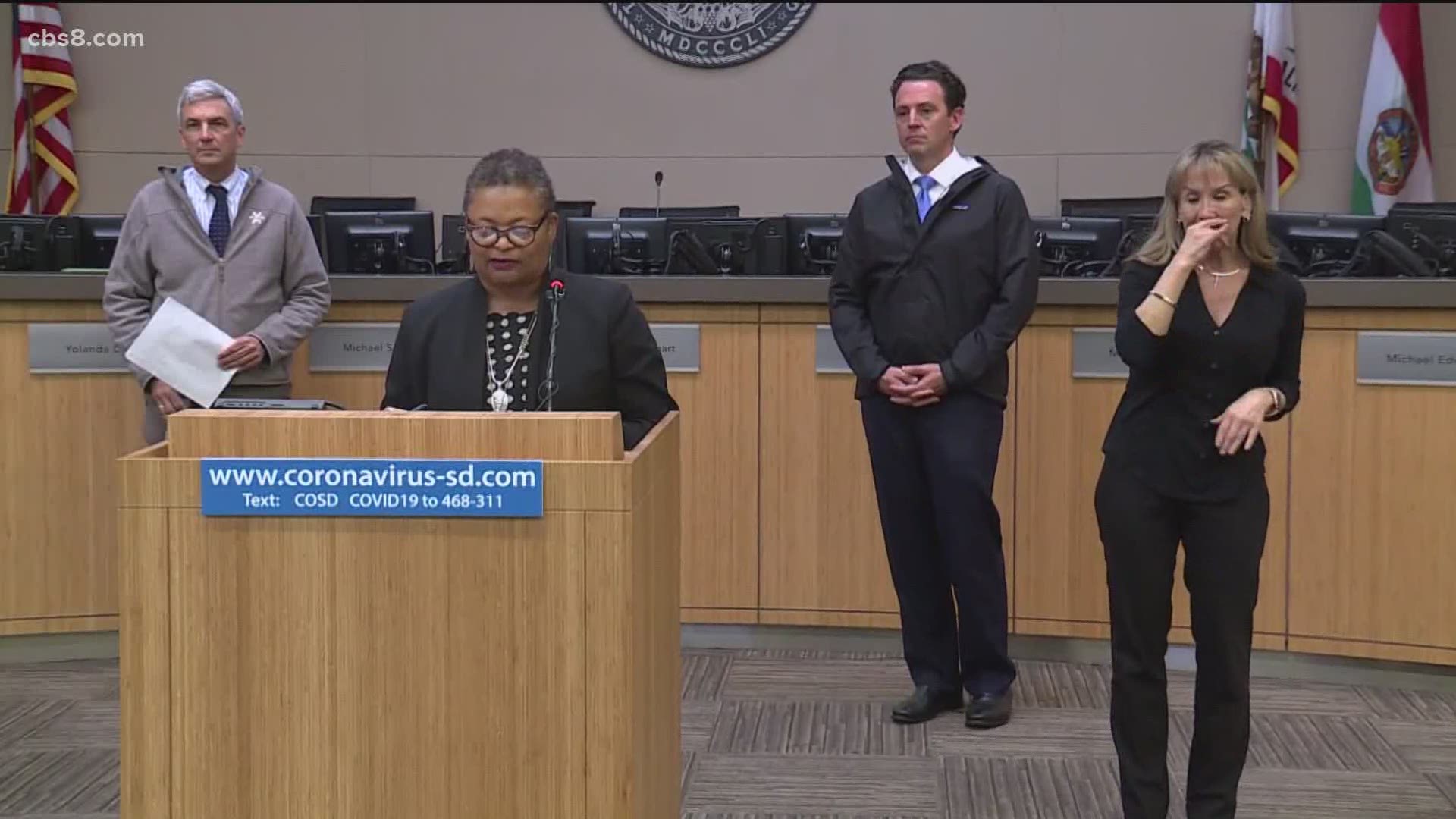 SAN DIEGO COUNTY, Calif. — Public health officers in California have been subjected to threats during the coronavirus pandemic as some residents become frustrated with orders to wear masks and slowly reopen businesses.

Law enforcement in at least five counties, including San Diego, have opened investigations.

“I don’t mean to pick on you, Ms. Wooten, you could have a thyroid condition for all I know, but when I see you walk up and down to the podium, you don’t look like you’re medically healthy,” said a woman who identified herself as Teresa.

She also gave out Wooten’s home address twice. It was later redacted from the county’s video recording of the meeting to protect the health officer’s privacy.

“[Wooten’s] been doing actually a tough, very tough job. I think she's done pretty well. She's been fair. She's actually gone along with opening up businesses and things like that and so I think the comment made about her was completely unacceptable,” said Supervisor Jim Desmond.

Locally, a small group claims they will petition the state to revoke Wooten’s medical license.

Wooten and the county routinely decline to discuss even the existence of threats.

“We're not going to go in any details about that,” responded Wooten when asked to confirm whether she’s been the subject of threats. “Our focus is to do the right thing and help to protect the public's health.”

The San Diego County Medical Society issued a letter Thursday addressed to the members of the county board of supervisors saying its members are disappointed at the "failure" of the supervisors to stand up against "personal abuse, attempted intimidation and doxing" of Dr. Wooten.

"Our County Public Health Officer deserves better. The public’s health – and the professionals seeking to protect it – deserve your strongest possible support. We sincerely hope you will act accordingly in the future," the letter reads in part.

The San Diego Sheriff's Department responded to an inquiry by News 8 into the matter saying the department does not discuss specifics in regards to security and threats.

"In this day in age of doxing of public figures, we take all threats seriously and investigate them thoroughly," their statement read in part.

Health officers are not elected officials. They are hired for their knowledge of public health and epidemiology. Much of the controversy stems from the timeline to reopen businesses and their initial order to wear a face covering. Last week, Gov. Gavin Newsom mandated face coverings in most public places statewide.

Wooten was an early adopter of the mask requirement. She modified her health order to require them within the county on May 1, citing widely accepted research that shows they are effective at reducing the spread of coronavirus, especially when people are asymptomatic.

“At the present, looking at the number of outbreaks, we could not recommend reopenings in the next week or next couple of weeks,” said Wooten, about an hour after public comment. “If we are still consistently above seven community outbreaks, which is the trigger, it would be ill-fated to recommend continued opening during that same time period. “

The supervisors later voted 4-1 to ask the governor’s office for additional guidance on reopening more businesses. However, their motion does not mandate Wooten to put the guidance into practice, if it is received.

“Her job is to keep us healthy and safe and she's doing a fine job of that,” said Desmond. “All of the openings have been up to her and the governor and so, she has allowed the openings to happen. I'm quite pleased at the pace that she's doing it.”