Serval cat sightings have been reported in Olivenhain and other parts of Encinitas. 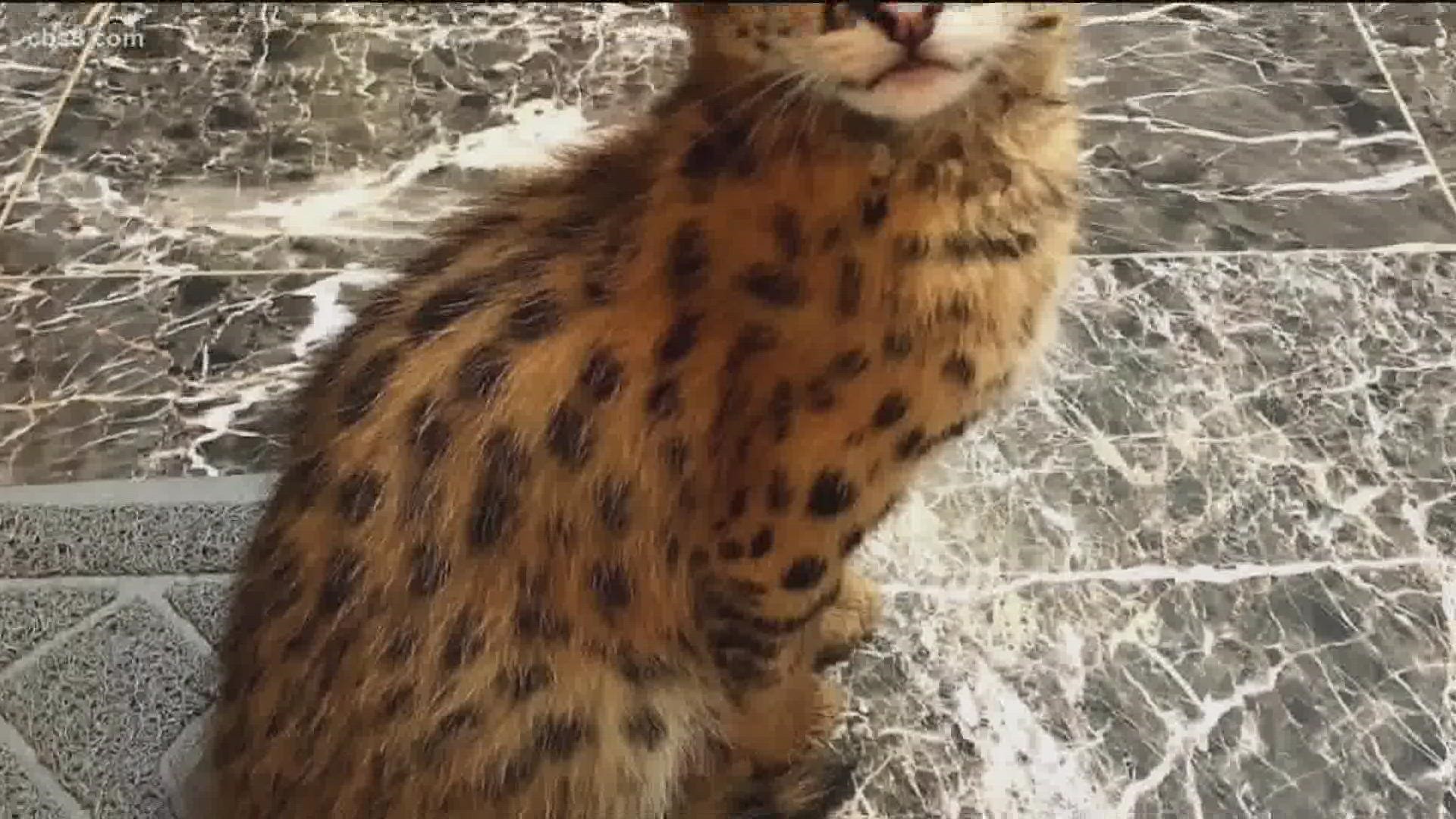 ENCINITAS, Calif. — The search in North County for a serval cat continues after a sighting in Rancho Penasquitos as it wandered into a couples backyard.

If you live in North County, you may have seen some recent social media posts showing pictures of a serval roaming through neighborhoods there.

"I mean your first instinct is, is that a leopard? Did the zoo lose an animal or Wild Animal Park or something?"

That was Kristi Clark's reaction after realizing the animal spotted in her Olivenhain backyard last week was a serval cat.

"None of us knew what it was at the time."

It was Friday afternoon and she was outside with her daughter and grandkids when her daughter's dog got spooked near some bushes.

Then, they heard something in the tree above. Soon after, her neighbor, who she shares a fence with sent her a picture of a serval in his yard.

The serval had eaten one of his chickens. It has since come back three more times.

Clark posted about it on the Nextdoor app, to share with their community.

Soon, others started sharing their sightings throughout other parts of Olivenhain and Encinitas.

"Usually, I don't pay attention to the posts, but the serval caught my eye," said Bruce Ireland.

Ireland knows very little about cats, but he does relocate snakes from properties and used to be a Sheriff's Search and Rescue deputy.

“I'll do whatever I can to find this cat because it certainly doesn't belong in nature,” said Ireland.

Bruce has been piecing together a timeline of the serval's whereabouts. He's also been in contact with Project Wildlife, as well as Fish and Game.

Though he hasn't done so yet, he said they've given him permission to set a trap. Still, he cautions others to keep their distance not knowing how it will react.

"It's big. Two-feet tall. It's probably between 30 and 45 pounds so significantly bigger than a house cat."

As for where the serval came from, his name is Pharaoh and he reportedly escaped from a home in Harmony Grove back on August 7, 2021.

The owners assumed he had been killed by coyotes.

“As soon as he went missing, we went looking for him everywhere,” said Emily Schultz.

Schultz said her husband and his mom bought the cat four years ago from a breeder in Mississippi, thinking it was an F-1 Savannah, a hybrid of a serval and a domesticated cat.

Servals are illegal to own in California unless you have a special permit.

His mom has since died, and they've been caring for Pharaoh ever since.

Though desperate to get him back, Schultz knows there's a chance if found and proven to be a full serval, he may be relocated someplace else.

"It's terrifying, but we're trying to find him regardless. I'd rather him be safe somewhere else than to be out there alone."

If you spot the serval, you can contact Bruce Ireland, Project Wildlife or The California Department of Fish and Wildlife.