There are more than 460,000 licensed nurses in California. Nurses have played a crucial role in caring for COVID-19 patients during the pandemic 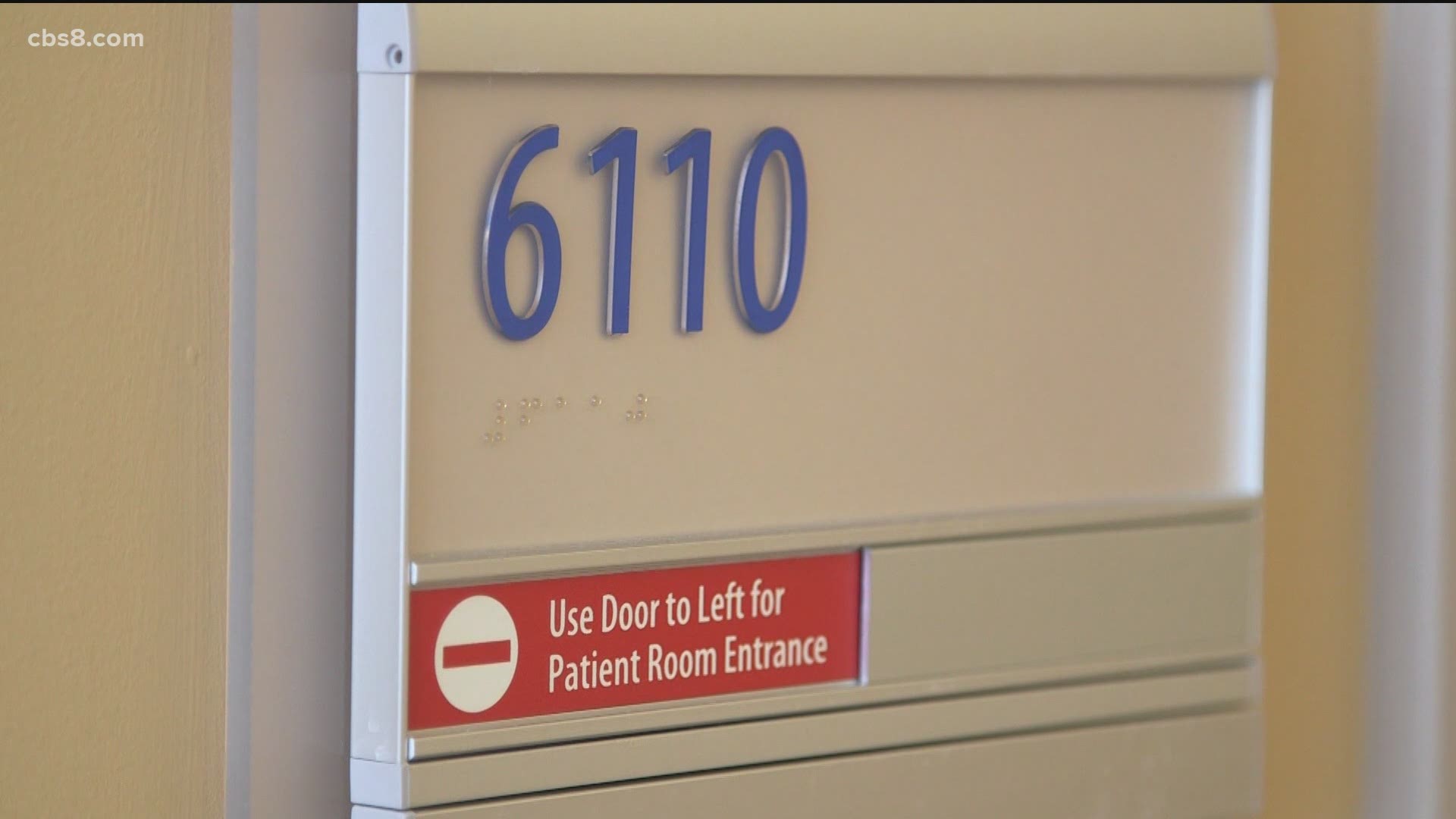 “I’m picturing myself as if this is my family member and there is nothing I can do,” Santiago said. “The desperation, the hopelessness. That’s what kind of kills you.”

Santiago, a representative for the National Nurses United union, said he’s cared for dozens of COVID-19 patients as a rapid response nurse at Palomar. Over time, the stress and exhaustion have weighed on him.

It only got worse after the hospital received a staffing waiver from the state in December, he said. Suddenly, each ICU nurse could care for up to three patients instead of two. For Santiago, that meant he was called into the ICU more frequently, which left less time to help patients in crisis throughout the rest of the hospital.

He couldn’t keep up with the number of emergencies, he said.

“Even if somebody says, ‘Your other patient is not doing so well,’ you’re still stuck in one room trying to resuscitate the other patient,” Santiago said. “Day after day, night after night, that’s what the nurses and caregivers are facing.”

More than 200 hospitals have received staffing waivers from the state since the pandemic began. The process allows medical centers to bypass a landmark 1999 law setting minimum nurse-to-patient ratios, which have been revered by healthcare workers across the state who say they prevent burnout and improve patient care.

The California Department of Public Health says hospitals should only use the waivers as a last resort if other methods to keep staffing levels up don’t work.

But an inewsource-KPBS investigation found dozens of facilities that received waivers failed to document that evidence on their applications.

An analysis of all publicly available waiver applications reveals over half of hospitals received at least one waiver without first rescheduling non-emergency procedures. A third didn’t transfer patients to other facilities, the data shows, and three-quarters didn’t establish clinics to take over their non-emergency cases.

Plus, some hospitals laid off or furloughed clinical staff in the 60 days before applying for waivers.

“You can't on the one hand say that there aren't enough nurses and then maybe bring in a temporary staffing workforce when hospitals are categorically laying off their employees,” said Stephanie Roberson, government relations director for the California Nurses Association, the state branch of National Nurses United.

At Palomar, 317 employees were laid off in April after the hospital canceled non-essential procedures and saw at least a 50% reduction in patients. Seven months later, after those operations resumed, the hospital requested a staffing waiver because it had been unable to hire enough nurses to meet the surge in COVID-19 cases.

Credit: Jacob Aere/KPBS
Nurses protesting outside Palomar Medical Center Poway on Dec. 11, 2020, over what they say are unsafe working conditions during the coronavirus pandemic.

Santiago said his union was never consulted before the hospital requested a waiver and has filed a grievance with management. All the pressure he and his colleagues were under with increased workloads — and the risks that posed to their patients — “could have been avoided,” he said.

“The workers are so demoralized because we’re expecting help here, and then what happens is, ‘OK, well you’re drowning here. Why don’t you carry this pile of bricks?’”

As the COVID-19 surge began late last year, Imperial County’s largest hospital was desperate to find ways to care for its patients.

El Centro Regional Medical Center set up a 50-bed tent in the parking lot and was transferring patients to other counties. The hospital was nearly out of beds, masks and other protective gear, and workers were also in short supply. The state and federal governments sent emergency teams to assist.

That’s when the hospital applied for a staffing waiver, said Chief Executive Officer Adolphe Edward, and it made a huge impact.

When California declared its state of emergency in March last year, it decided not to enforce nurse-to-patient ratios at hospitals because of COVID-19.

Starting in the summer, the state asked hospitals to return to their normal process for requesting help when staffing shortages arise — to submit applications through the public health department explaining why they don’t have enough nurses. If a hospital is given permission to increase workloads, it’s instructed to “maintain efforts to meet required staffing levels at all times.”

“Our primary goal as part of that effort is to provide staff to facilities rather than waive them, as additional staff is the safest and most reliable way to ensure high quality care,” the department wrote in an email to reporters.

The state said it would publicize all approved waiver applications, but some of those documents were never posted online. Reporters reviewed 196 applications from 131 hospitals that have been made available on the state’s website at some point during the pandemic.

On its waiver application, the El Centro hospital marked down it had tried all of the state’s options for increasing staffing levels, but it still couldn’t keep up with the rapid growth in COVID-19 patients.

At least 15 of the county’s hospitals have been granted staffing waivers. Six of them applied for a waiver without first rescheduling non-emergency procedures, according to their applications.

Edward said he was aware of other California hospitals receiving waivers and then never needing to use them. He said that contradicted the mantra he picked up in the Air Force: “Integrity first, service before self.”

“I don’t think that’s appropriate either because it wastes the time of (the state) and is giving approval for things that we shouldn’t be asking for,” he said.

Most San Diego County hospitals would not discuss why they asked for waivers, but officials at two — Scripps Health and Rady Children’s — said they applied for them proactively, in anticipation of an increase in cases.

Rady Children’s didn’t attempt any of the state’s suggested steps to keep staffing levels up, but it received a waiver anyway. Dr. Nicholas Holmes, the hospital’s chief operating officer, said the waiver was never used because cases didn’t rise as much as expected.

The state public health department said each waiver is reviewed on a case-by-case basis and not all alternative options listed on the application need to be pursued at all facilities.

Waivers are issued based on a hospital’s current metrics, rather than possible future surges, the state said. That means once a waiver is granted, a hospital could decide to load nurses up with more patients at any time — even if it hasn’t seen a surge yet.

Scripps and Rady Children’s executives said hospitals should be trusted with waivers before they’re needed, because an unexpected COVID-19 outbreak could bring in a flood of patients.

By the time Scripps reapplied for waivers in February, the hospital system had exhausted all the alternatives the state recommended, Cole said.

“I think it’d be poor planning and it would be harmful to our staff and our patients to not take advantage of a tool that’s available and use it sparingly when it’s absolutely needed,” he added.

Earlier this year, the state said hospitalizations had dropped enough that it would eliminate the expedited waiver process, which began in December as a faster way to help hospitals with staffing shortages. Medical centers were allowed to increase nurse workloads as soon as their waiver applications were submitted, as long as their nurse-to-patient ratios stayed within limits.

The state also decided to end all active staffing waivers early, on Feb. 8, impacting more than 200 hospitals. At least 84 facilities were allowed to extend their waivers until additional staffing support from the state arrived.

Scripps’ four hospitals were offered that extension until March 12, Cole said, and it has received three employees from the state to help with workloads.

Studies have found that as nursing levels decrease, hospital stays get longer and patient feedback becomes more negative. Some research has linked California’s ratio law to lower mortality rates and higher staff retention when compared to other states, but other scientists have found mixed results.

Bryan Telfort, a coronary care nurse at Kaiser Permanente Los Angeles Medical Center, said once his hospital was granted a staffing waiver in December, patient and worker safety was compromised.

In an eight-page letter sent to hospital management on behalf of his union, Telfort detailed the problems stemming from the waiver. Multiple patients were crammed into single rooms, he reported, causing one nurse to climb over an empty bed to care for a patient.

In an interview, Telfort said patient harm wasn’t just a risk — it was a reality. Some people who needed dialysis couldn’t get it because the equipment didn’t fit into the tight rooms, he said.

A Kaiser spokesperson said its hospitals have only relied on the waivers when necessary and used them safely and effectively. Before requesting a waiver, the hospitals canceled non-emergency procedures, tried to recruit more nurses and offered overtime to current staff, the spokesperson said.

At the height of the pandemic, over 70% of Kaiser’s Southern California patients were being treated for COVID-19.

The head of the California Hospital Association, which represents more than 400 hospitals and health systems, said in extraordinary circumstances, patients are safer with waivers than without them.

Credit: inewsource
Christa Jones, a nurse in the Sharp Grossmont Hospital intensive care unit, prepares to give Tylenol to a COVID-19 patient to lower his fever, April 20, 2020.

“In a pandemic, we're now dealing with safety in a different way and on a different scale,” said Carmela Coyle, the association’s chief executive officer. “And if nurse staffing ratios are preventing us from caring for more patients in the intensive care unit, that's not an answer that we can accept.”

In his complaint, Telfort said the problems he reported at Kaiser could have been avoided: Nurse managers were not stepping in to take patients and the hospital was not downgrading less serious cases out of the ICU, leaving staff overworked and overwhelmed.

Telfort said at least six employees have spoken with Cal/OSHA about safety concerns at the hospital. The division confirmed it has received four complaints from Kaiser’s Hollywood hospital during the pandemic and one investigation is ongoing.

A review of Cal/OSHA records shows at least 11 hospitals that received waivers have been cited for coronavirus-related violations.

Kaiser Zion has received three staffing waivers since July. On each of those waivers, the hospital did not mark that it tried any of the state’s alternative options before submitting its request.

National Nurses United representatives have said increased workloads have made it harder to follow the infection control measures Cal/OSHA requires, putting them at risk of catching and spreading COVID-19.

“When I’m overworked I get fatigue, and thinking and judgment gets clouded,” said Tinny Abogado, a nurse in a step-down unit at Kaiser Los Angeles. “Once I caught myself almost entering a COVID positive patient’s room without my N95 respirator on.”

Kaiser Los Angeles’ waiver is set to expire Friday, a spokesperson said. But if another COVID-19 surge comes, it could reapply for a waiver from the state.

Abogado, who has worked at the hospital for 19 years, went from caring for three patients to four because of the waiver process. She works with many seriously ill COVID-19 patients, she said, and each one could be in crisis at any moment.

“I am already working so hard just to keep my three patients safe,” she said. “To say, ‘Oh, it’s just one more,’ is totally wrong and ignorant.”