Leslie Furcron and her attorney believe the officer intentionally shot the bean bag round at the grandmother and plan on holding the police department liable. 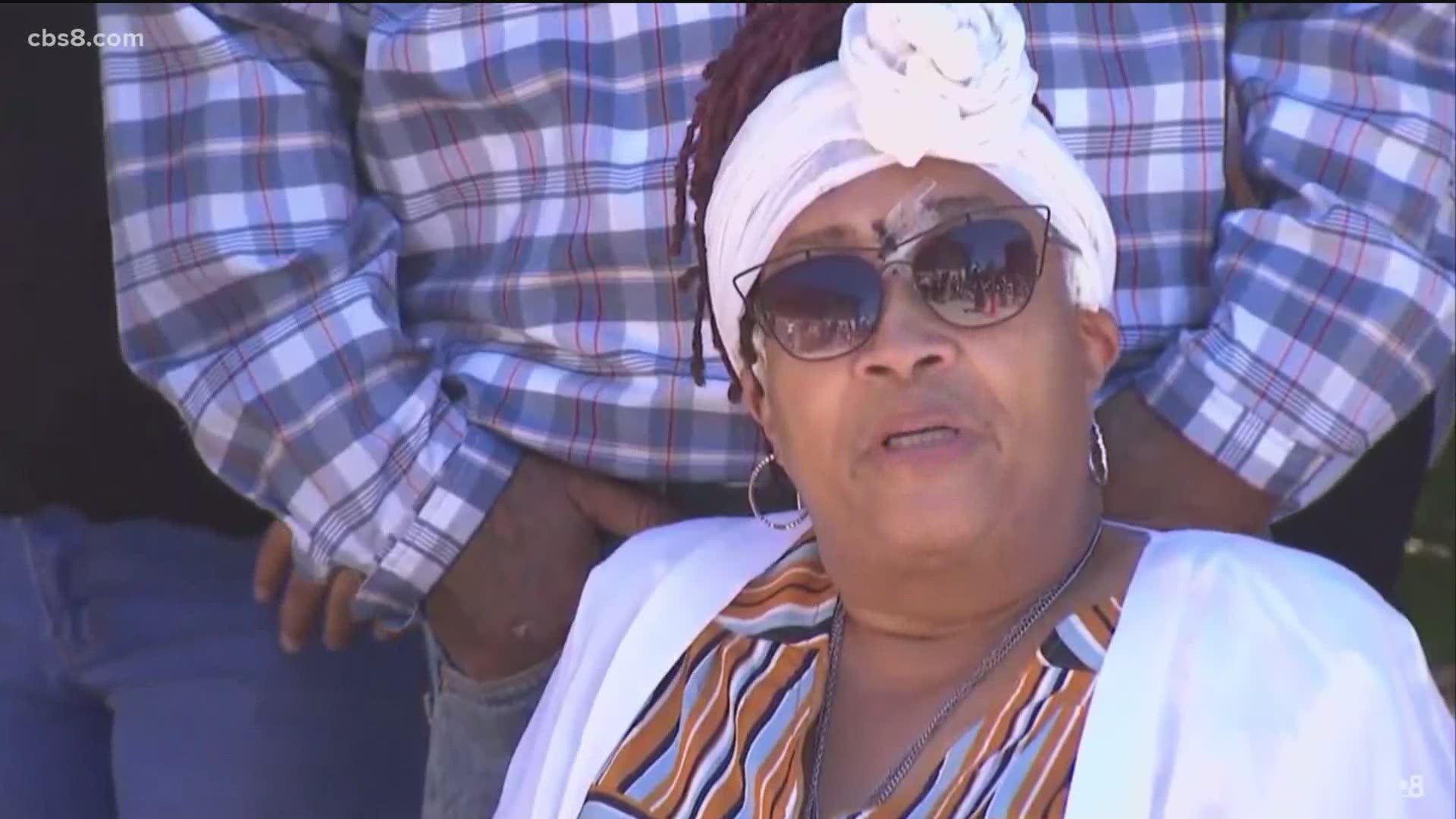 LA MESA, Calif. — Leslie Furcron's attorney, Dante Pride with The Pride Law Firm, confirmed Wednesday morning during a press conference in front of La Mesa City Hall that it was indeed a bean bag round that was fired at the grandmother during the La Mesa protests on May 30.

Just before the media briefing began Wednesday, Ms. Furcron, with her face bandaged and barely able to speak, had to be assisted by her family to reach the podium because she said she’s very weak and it takes a lot for her to do anything now.

Pride said he believes the officer intentionally shot the bean bag round at the grandmother. He believes the La Mesa Police Department should be held liable. He said the only thing Ms. Furcron is guilty of is littering and that she did not throw anything at officers.

"I believe La Mesa Police Department has admitted, by their own self-serving timeline, that the officer fired in retaliation for what he thought was Ms. Furcron throwing an object," Pride said.

He said Furcron still cannot see out of her left eye.

“I am sincerely thankful that Ms. Furcron has been released from the hospital and is able to now heal at home with her family. I pray that she has a speedy and full recovery. I can assure Ms. Furcron, her family, and the public that this unfortunate incident will be fully investigated, to include an in-depth look at our crowd control practices. The men and women of the La Mesa Police Department work tirelessly to provide quality and professional police services for all members of our community. Our hope is that we will all come together to heal the wounds, nurture a culture of open communication, and make the City of La Mesa a better and safer place to live.”

Ms. Furcron, who is 59 years old, will continue her recovery at home after being released from the hospital Tuesday.

Video of Furcron being struck with bean bag outside the LMPD headquarters circulated on social media and led to accusations of police brutality. Furcron was hospitalized following the incident and was in intensive care in a medically induced coma with a breathing tube at one point.

"When I first saw her it was kind of crazy to see my mom like that with a tube down her throat.  It kind of made me tear up for a second. I was used to seeing her bright smile, or yelling at me or talking about something. So, to see her like that really shocked me. I was like, how could you do her like that? I know black men have been involved in a lot of stuff but I couldn't believe they would actually shoot an innocent black, grandmother in her face with her hands up. So, I was really hurt about it," her son Ahmed Furcron told News 8 last week.

The protest Leslie Furcron was participating in was held following the death of George Floyd at the hands of police officers in Minneapolis and called for an end to systemic racism and police violence against black people. It also came on the heels of the controversial arrest of 23-year-old Amaurie Johnson near the Grossmont Trolley station which also drew protest efforts to the East County city.

The La Mesa Police Department later announced that no criminal charges would be sought against Johnson, who was originally contacted for smoking in public, then later arrested on suspicion of assaulting an officer. The officer involved has been placed on administrative leave.

Furcron was live-streaming the protest on Facebook when she was struck.

The La Mesa grandmother's family and civil rights activists have called for the officer who shot Furcron to be publicly identified, fired and charged with attempted murder.

The attorney representing the family said he reviewed dozens of videos and spoke with scores of people present at the protest saw no evidence that Furcron was violent or did anything to justify being shot.

Also on Tuesday, La Mesa released a detailed timeline of the events surrounding the protests which were followed by looting and rioting in the city on May 30.

The family has set up a GoFundMe page to help with Furcron's medical bills.