The main purpose of the LeoMar Preserve is to restore the balance of San Diego County's ecosystem protecting the endangered species and the plants. 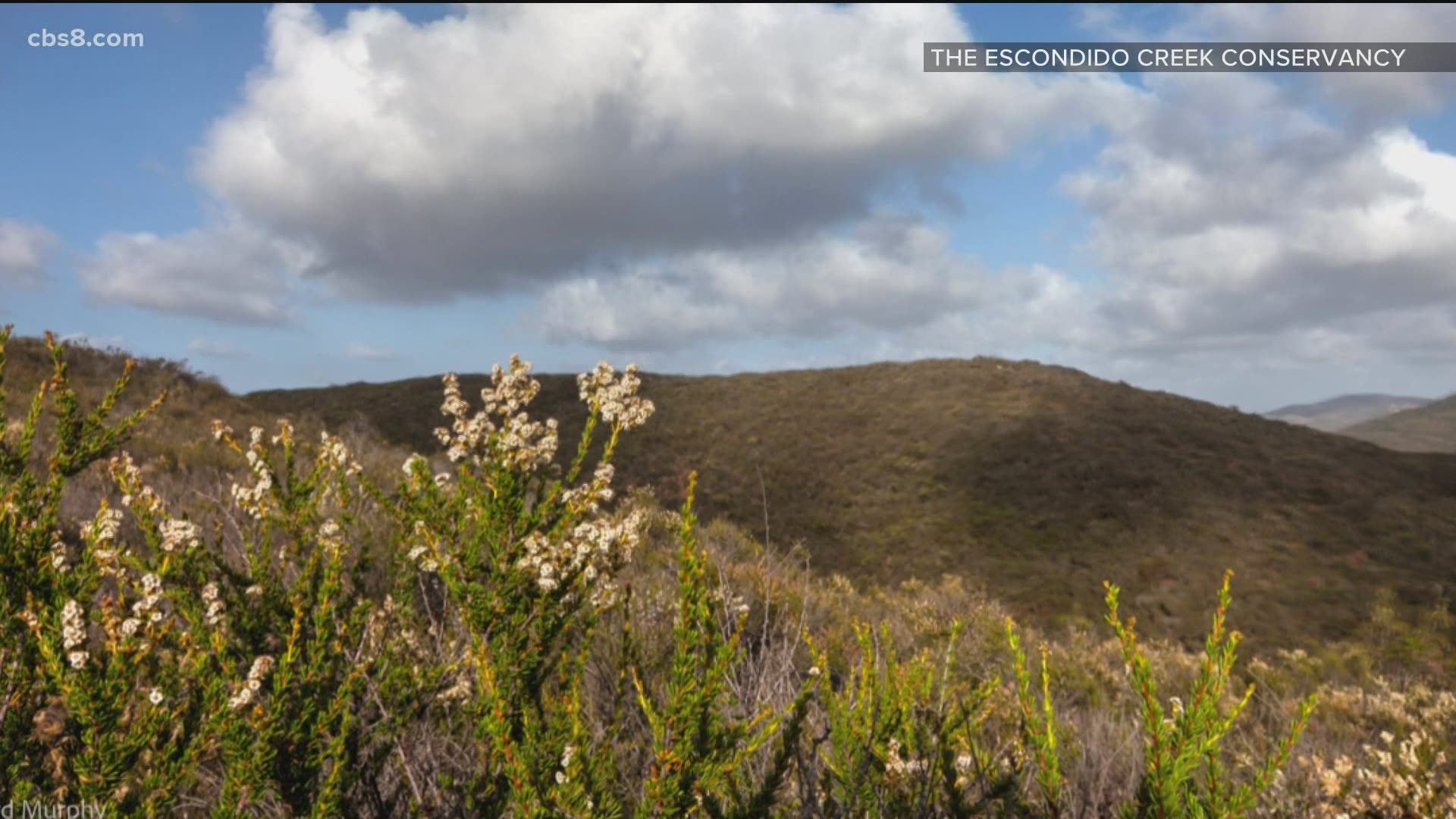 ENCINITAS, Calif. — Tucked away in the hillside of San Diego County is a new land preserve.

Leonard Wittwer, the President of the Board of Directors for the Escondido Creek Conservancy, described some of the animals that have made themselves at home at LeoMar, a new 79-acre land preserve purchased by the conservancy in the Olivenhain community of Encinitas.

Leonard is one-half of LeoMar.

"In terms of the wildlife, lots of bird species, California gnatcatcher, of course, and lots of reptiles, several lizards and lots of snakes," said Wittwer.

And when Leonard says endangered species, there is one that stands out above the rest.

"The first and foremost if the California Gnatcatcher, the Coastal Gnatcatcher. The small songbird that is almost entirely reliant on the coastal sage scrub habitat type. So as that habitat disappeared, so did the songbird," said Wittwer.

Martha Blane is the "Mar" in LeoMar. She served as the first board President of the Escondido Creek Conservancy. She and her husband Leonard have added the 30-year-old land trust to their list of conservation efforts.

The coastal sage scrub habitat consists of plants including wild lilacs along with California buckwheat, sumac and California sage.

"In the very early spring - a lot of times this blooms in February - you'll see kind of a white sheen or hue to the hillside around here," said Martha as she described Verrucosus, which is a White Ceanothus, commonly known as White Lilac.

When asked why the desire to help with conservation efforts in San Diego County, Martha replied, "We saw an opportunity to be proactive. To help preserve our part of the planet and we took it."

"I just realized over that time of growing up and seeing the planet change so dramatically, you know through the 70s and 80s, and all of us just really need to do our part," Martha continued.

The efforts of Leonard Wittwer, Martha Blane and the entire team at the conservancy to protect and preserve the Lower Escondido Creek watershed didn't just happen overnight. This lengthy process included finding a "good" plot of the land, a hazardous material survey, mineral report, finding a willing seller along with sending their paperwork to Sacramento in a two-year process. And of course, funding was key.

"At the end of the day, the money mostly comes from the Wildlife Conservation Board, which is State of California conservation money and the federal government endangered species act, They call it, Section 6 money," said Wittwer.

In the end, Leonard and Martha said it is all worth it to see this preserve flourish.

"Development can continue, commerce can continue, the economy can continue to grow. Humans still have areas to interact with nature 'cause I truly believe that it is part of our nature to be connected to the Earth," said Leonard.

The main purpose of the LeoMar Preserve is to restore the balance of our county's ecosystem protecting the endangered species and the plants. Leonard does say it could take three or more years for this preserve to be open to the public.

If you would like to learn more about the Escondido Creek Conservancy, the LeoMar Preserve, and their other conservation efforts, click here.