In addition to the emergency board meeting, multiple press conferences will be held on Tuesday addressing the tortilla throwing incident. 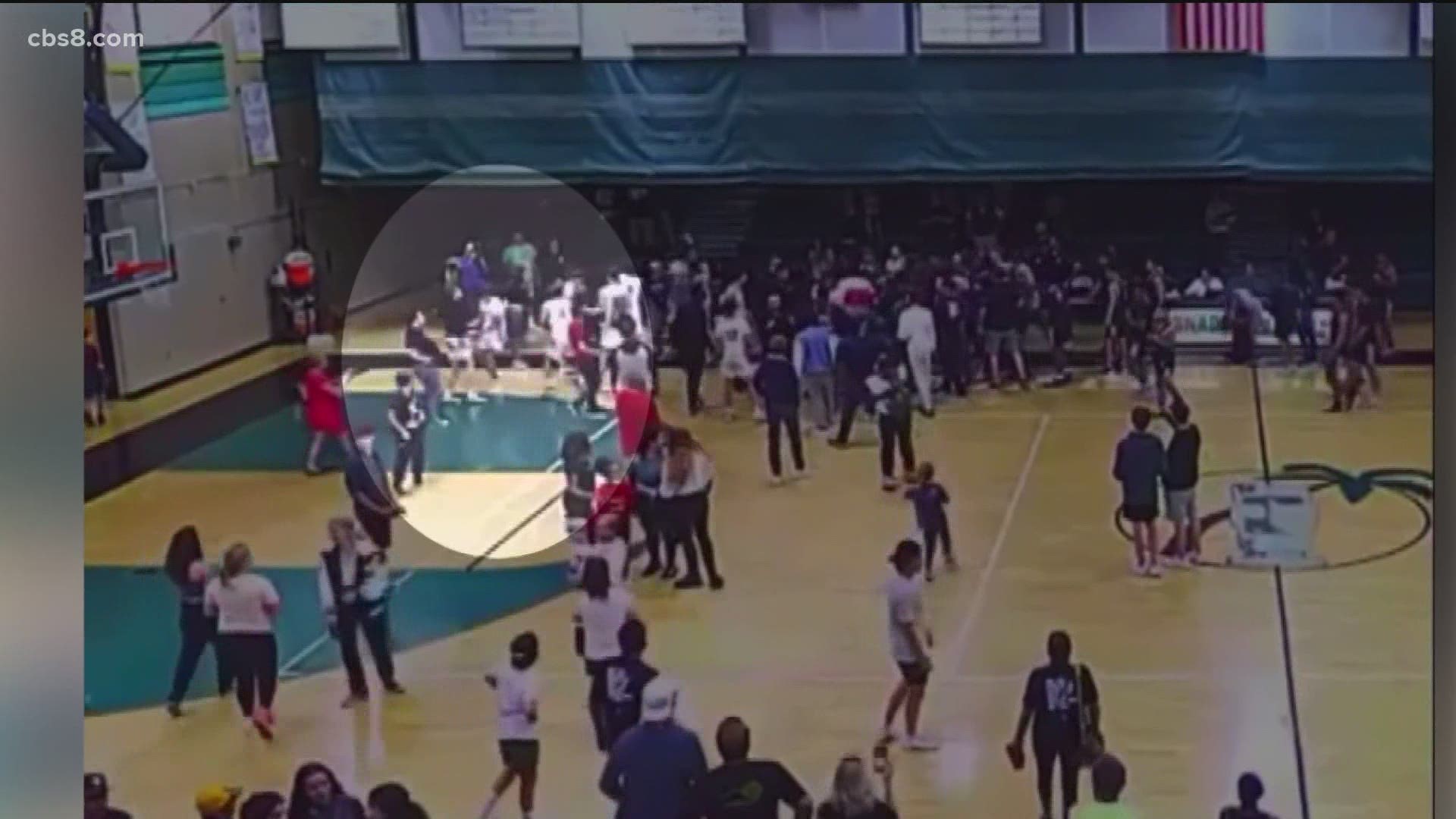 CORONADO, Calif — There is outrage all over social media after tortillas were thrown at a group of predominately Hispanic high school athletes from Orange Glen following a game at Coronado High School.

Parents, coaches and local leaders say they are furious over the incident that happened Saturday night at Coronado High School.

News 8 received several messages from viewers who have seen the video on social media.

After a playoff basketball game between Orange Glen and Coronado, tortillas were thrown in the direction of Orange Glen High School athletes. The incident comes just a week after students in the Coronado Unified School District held a walk against racism for a second year in a row citing racism within their schools amongst their own classmates.

News 8 spoke with Orange Glen assistant coach Lizardo Reynoso who said, “It's disturbing. Our guys are still kind of bothered, especially a lot of our Hispanic guys, like why would they do that. They understand that there's a lot of racism and hate going on today but to top that off with a defeat after working so hard all year, it's like a slap in the face."

Coronado Unified School District’s Superintendent, Karl Mueller said he was appalled to hear of the incident. He added, “This behavior is reprehensible. We cannot allow anyone in our community to be made to feel unwelcome and we send our deep and sincere apology to the Orange Glen community.” The statement goes on to say, “swift action will be taken to address all those involved and they will be held accountable.”

News 8 spoke to Orange Glen's Point Guard who said he is upset about the incident.

"We were already hanging our heads because of the loss and I think that it made it worse for us and made us mad," said Roell Lumbag, Orange Glen Point Guard.

"I hope it sets an example of how not to act and [is] a wake-up call for Coronado or other schools to be better," said Lumbag.

Coronado's Guard Wayne McKinney tweeted that he was not a part of the tortilla toss but apologized on behalf of the team and coaches and says it was not meant to be offensive. He also said they have received death threats and hate messages.

The Executive Director for the Chicano Federation, Nancy Maldonado said she has been fielding calls and messages from Coronado High students concerned about the incident.

Last August, in response to community protests and the racial justice movement the school board rejected a new racial equity plan in the curriculum instead an equity board policy would be crafted.

"A lot of the students feel this is the world they live in and that racism, this was a racist act, is really embedded in the culture of the school and Coronado community," said Maldonado.

We have been in contact with the Coronado Unified School District regarding last night's incident. They send their deep and sincere apology to the Orange Glen community and shared that the individuals who participated in these reprehensible actions do not reflect their school district values. We understand they will be taking swift action to address all those involved and have included their message to our community below.

There is no place for hate in EUHSD. We do not tolerate racism, cultural disrespect, or any other behaviors that demean others. We remain committed, as a district, to creating safe spaces for all our students. What we do to combat racism and cultural disrespect must extend beyond the classroom and school campus."

It is incumbent upon us to create environments in our larger communities where our students feel respected, valued, and safe. We are hopeful that all those involved will learn from this incident and move forward with a greater awareness and collective commitment to stand against racially insensitive and discriminatory practices.

The CIF State office also issued a statement saying they are reviewing the incident and they are working with the administration of both schools to address the matter and determine the appropriate next steps.

The League of United Latin American Citizens weighed in on the incident with the following statement Monday from Domingo Garcia, LULAC National President:

“What kind of people and community would allow this type of hateful behavior? This was a pre-planned act that took someone going out ahead of time to buy the packs of tortillas, pass them out and be ready to throw them at the Latino team and their coaches at the end of game, irrespective of the score. A spur-of-the-moment act is one thing but this chaotic scene that could have easily turned even more violent was clearly not that. LULAC calls for the Coronado Unified School District and the California Interscholastic Federation (CIF) to conduct a thorough and transparent investigation into the assault that took place and take the strongest appropriate actions against those responsible. Players who display actions perceived to be racist are not champions and coaches who allow this behavior are not suitable employees in a public school and should be removed.

Similarly disturbing is the characterization on the Coronado Parent-Teacher-Organization (PTO) Facebook page that throwing tortillas is like heaving ‘Frisbees’ or ‘graduation caps’ into the air as a ‘celebratory action’. Nothing could be further from the truth. Saturday night’s act of throwing tortillas was meant to perpetuate the worst kind of racist reaction against innocent athletes, their coaches and their families. Coronado supporters are trying to play the victim here saying the reaction to the tortilla tossing is ‘extremely upsetting’ to them. Try walking in the shoes of those struck by their projectiles

LULAC will not accept this behavior as the new normal in America and acts of racial hate directed at Latinos will not be condoned or dismissed as kids-will-be-kids. Concrete, meaningful discipline is warranted and we will monitor the steps taken by the Coronado Unified School District, the CIF and Coronado Police Department in this matter.”

Community activist Tasha Williamson will be holding a news conference on Tuesday at noon to stand up against hate.

Press conference tomorrow! Thankful to community for pulling this together in solidarity with Orange Glen High! Please attend if you can! Any students, parents and staff from Orange Glen High are welcome to speak! Shutting down Racism! pic.twitter.com/RBwtW779CX

At 5 pm The San Diego Chapter of the Council of American Islamic Relations (CAIR) will hold a news conference at Escondido Union High School District headquarters to denounce hate.

On Wednesday, Coaches for Racial Equality SD is holding a 7 p.m. Zoom for all local coaches, players, parents and administrators to help heal.

We would like to invite ALL local coaches, players, parents, admin, alumni to our Zoom meeting this Wednesday, 6/23, 7-8 pm PST (details soon).

Our goal going in was to bridge the gaps across San Diego county. To unify to sports community in hopes of affecting bigger change...