San Diego Cabbie launched this week to ensure elderly Asians are safe and don't have to fear riding public transportation or walking alone. 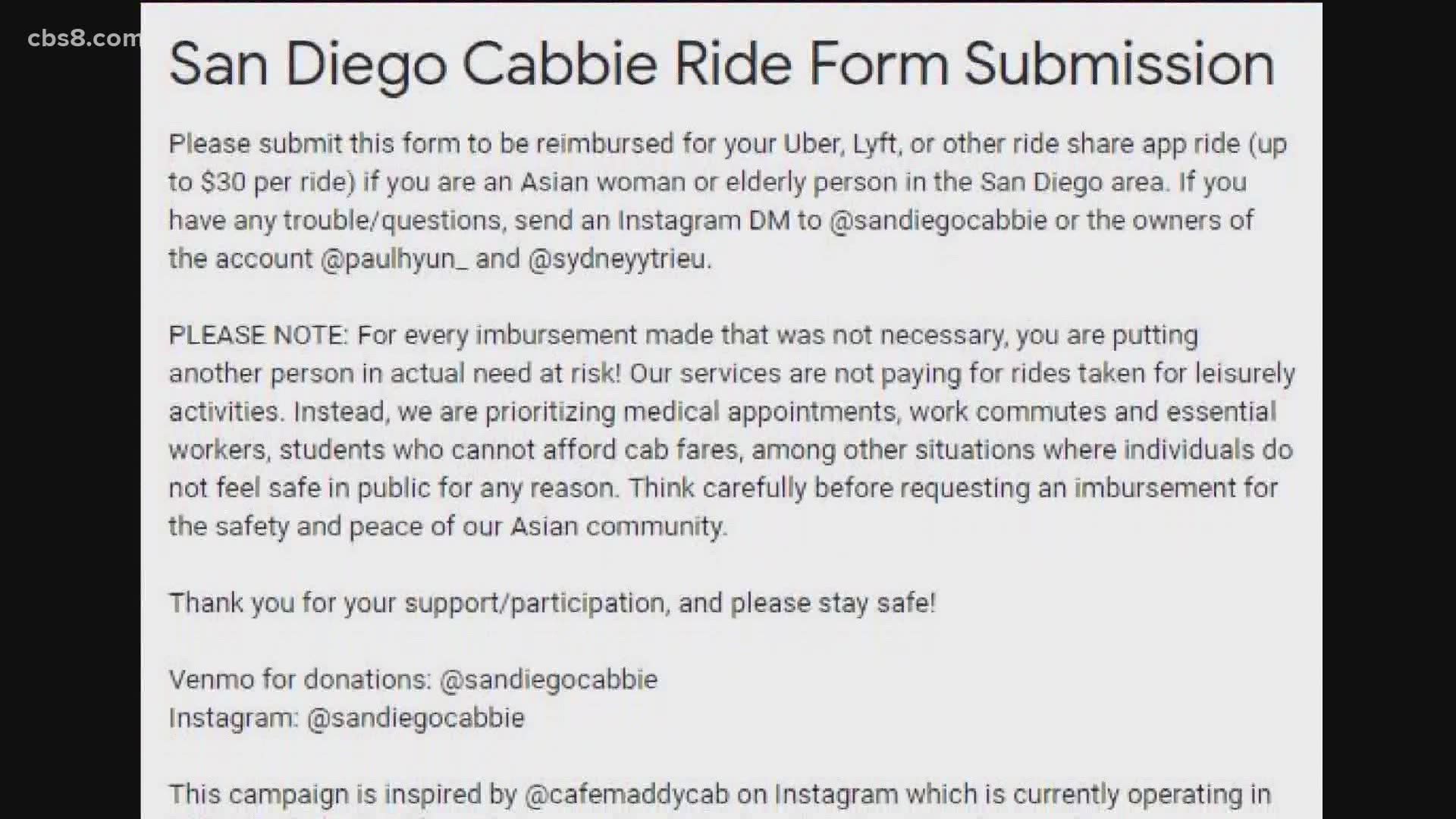 SAN DIEGO — The movement to help Asians with a free and safe ride is spreading in San Diego. This week two college students started San Diego Cabbie, a service that covers up to a $30 Uber or Lyft ride for Asian women and seniors.

With the rise in attacks against Asian Americans, especially the elderly, Sydney Trieu and Paul Lim wanted to help their community, so they won’t have to take public transportation in fear or walk alone.

“A lot of our family and friends are here and we want to make sure Asian communities are safe in San Diego,” said Sydney Trieu, San Diego Cabbie co-founder.

She is a sophomore at UC Riverside and her partner Paul Lim, a sophomore at Emory University in Atlanta, both are 2019 Del Norte High Schools alumnus.

They were inspired by Cafe Maddy in New York City and Compassion Oakland, who are giving rides or covering rideshare fares for Asian Americans.

“We are thankful that we have the opportunity to bring a tablespoon version of change into the community we both grew up in,” said Lim.

Both say they have experienced the fear of being harassed or attacked.

Sydney says before she and her cousins were leaving for dinner her grandmother warned her to wear a mask and sunglasses to hide their face to conceal her Vietnamese, Filipino and Chinese identity.

“It took my perspective and made me scared of the real world out there and how dangerous it can be,” said Trieu.

Lim, a Korean-American, says living in Atlanta he and his friends have experienced verbal harassment while riding public transportation.

“Even a mask can't cover us, going outside in public has been terrifying,” said Lim.

San Diego Cabbie launched this week and three days they’ve raised a more than a $1,000 and the word is spreading across the community.

“The first woman she was going to a doctor's appointment and she said that thanks to our initiative here that she was able to get there safely and also had financial issues as well,” said Lim.

Both Lim and Trieu know this catalyst for change could not be done without the community support.

“It's really warmed my heart because I really feel the teamwork that we have in the community, it's not just me and Sydney doing this together, it's really the entire community,” said Lim.

San Diego Cabbie is donation based and also accepting donations.