In a video of the heated exchange a white male police officer is seen pushing a black male repeatedly into a seated position before handcuffing, then arresting him. 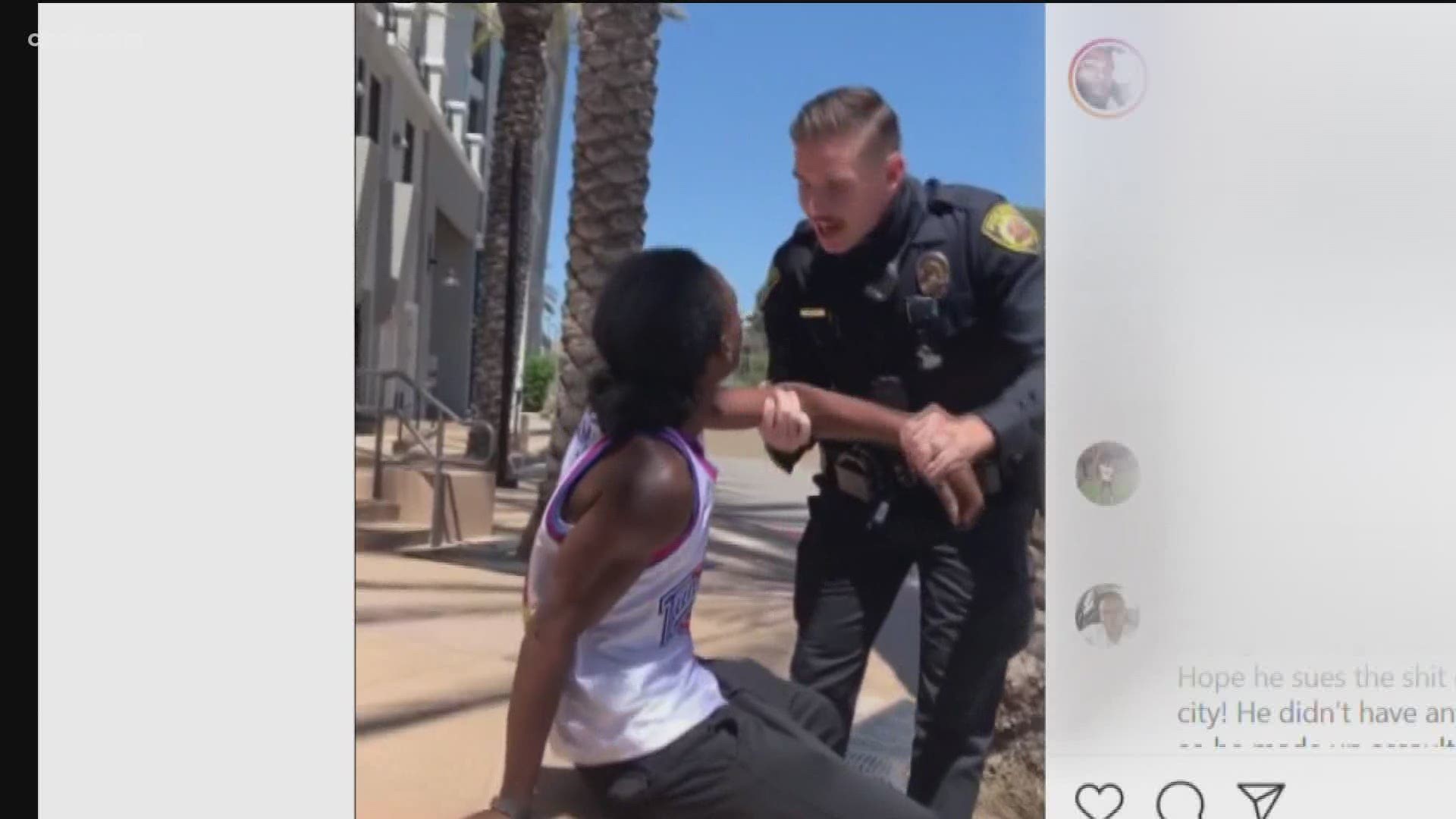 LA MESA, Calif. — Content warning: The video linked in this story contains explicit language and content that may not be suitable for all viewers.

The La Mesa Police Department and the City of La Mesa issued statements Thursday regarding a video circulating on social media of a heated exchange between a white male officer and a black male citizen near an area trolley station. The city's statement indicated that the officer has been placed on leave pending an investigation and that a special investigator has been appointed.

LMPD's statement indicated it was aware of the incident that took place Wednesday near Grossmont Trolley Station and said a review "to find out what happened" began immediately.

What led up to the encounter is not shown in the video.

La Mesa police told News 8 the incident is under review, but Amaurie Johnson and his friend, who recorded the video, shared their version of events with News 8.

“My friends live in these apartments. He’s [the officer] saying, ‘are you waiting for the bus?’ I said, no. I’m waiting for my friends,” said Johnson.

Henry Lieng, Johnson’s friend, said, “when we pulled up it kind of proved that he had a purpose here and he was waiting outside for us. That's all it was.”

At the beginning of a nearly six-minute video, the officer is seen holding the man by his shirt and repeatedly pushing him into a seated position on a bench.

"I have no reason to be detained by you," Johnson is heard saying to the officer.

With the assistance of a female officer, the cop then handcuffs the man.

"You put your hands on me," the officer is heard telling the man after he is cuffed.

Johnson denies this and the officer says Johnson "hit [his] arm."

"He just came over to hang out. Why are you guys harassing him?" asked Liengthe, man taking the video.

The female cop is repeatedly heard telling the handcuffed man to take a deep breath.

"Ain't no deep breath, ain't no calming down. You all got six cops for no reason over here," Johnson is heard saying.

He also is heard saying the handcuffs were placed on tightly.

Johnson goes on to tell the female officer he was standing at the station waiting for a friend when the male officer started harassing him.

Around five minutes into the video, the original police officer tells Johnson he's being arrested for a 241(c), "assaulting a peace officer." Johnson is then led away by two officers.

Johnson said he believes the death of George Floyd on Monday is very much at play here.

“I feel like the climate is just that we're not taking that no more. You know? Harassment from police-abuse of power,” he said.

The officer is now on leave, but Johnson is still scheduled to be in court in the fall.

The video had been viewed nearly 900,000 times on Instagram by Thursday afternoon.

LMPD's statement said they take allegations of misconduct seriously and asks that anyone with information on of video of the incident call (619) 667-1400.

The City of La Mesa issued the following statement regarding the incident:

"The City Manager’s office is aware of an incident occurring on May 27, 2020, involving a La Mesa Police Department (LMPD) contact with a citizen at the Grossmont Trolley Station located on Fletcher Parkway, and the circulation of a video (from an unidentified source) of that contact on social media. The video appears to indicate that a LMPD officer detained an African American male, and in the process, the LMPD officer administered physical contact.

In response, the City has caused a special investigation of the incident and the LMPD has placed the officer on administrative leave pending the outcome of the investigation. The Special Investigator has already been selected, and his appointment is pending the execution of a special services agreement which will be released for public review when available.

The Special Investigator will be assisted by the law firm of Liebert, Cassidy, Whitmore, which has acted as Special Counsel to the City on several police-related matters in the past.

Also, in response, Mayor Mark Arapostathis stated, “The City takes these matters very seriously, and consequently, in conjunction with the City Manager’s and City Attorney’s offices, has already begun the appropriate steps forward to investigate this matter thoroughly and take all necessary actions.”