In this News 8 Throwback, we're taking you back to a few times when San Diego hosted the Super Bowl. 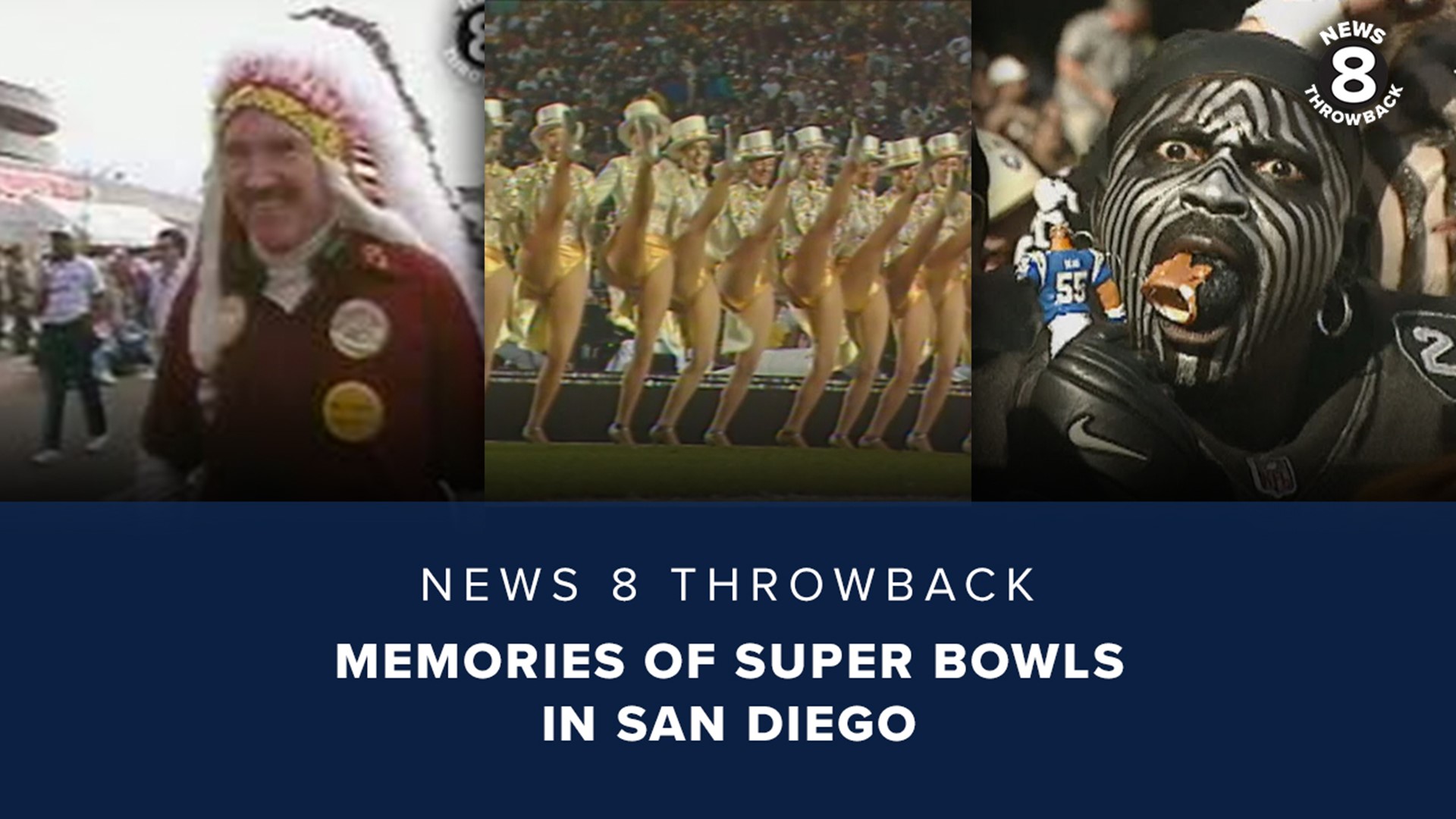 SAN DIEGO COUNTY, Calif. — The Super Bowl is just a few days away in Tampa Bay, so we’re taking it back to the three times San Diego played host. And what a fine city to invite the world to in the dead of winter. No blizzards here -- just sunshine, mild weather and an endless amount of fun activities in the days leading up to the big game. It’s especially bittersweet to see the Murph and the Q in its glory days.

January 31, 1988, Jack Murphy Stadium. Washington Redskins defeated the Denver Broncos 42-10. Just days before the big event, News 8's John Culea attended Media Day with journalists from all over the world who clamored to ask the football stars a variety of questions.

January 25, 1988, Media descended on San Diego ahead of Super Bowl XXII. Former Redskin quarterback Sonny Jurgensen of WUSA in Washington D.C. was one of them. With the beautiful sunny skyline behind him, News 8's Loren Nancarrow said weathermen doing their forecasts from here would be talking about sunscreen and sunglasses instead of wind chill factors and frostbite. (Loren was not a weatherman yet--he was an anchor/reporter). Denver weatherman Cliff Nicholson of KUSA was playing tourist, snapping pictures of Shamu. He was impressed with the warm weather here.

The day before at Jack Murphy Stadium

The stadium was all spruced up for the big game with one day left to go. Crowds were welcomed into the stadium to check it out but not News 8 cameras--but we did manage to get a shot of the field. Reporter Doug McAllister said the security detail was as warm, open and friendly as a South American dictatorship. There was a wall of secrecy and they were tight-lipped about a VIP tent and who was going to party in it. Washington Redskins and Denver Broncos gear was up for sale and fans didn't seem to mind paying a little more for it. The Redskins defeated the Broncos 42-10 in Super Bowl XXII.

The day of the big game, News 8's Doug McAllister reported from the parking lot of the stadium where fans from around the country arrived as early as 9 a.m. to tailgate. Some couldn’t afford a ticket to the game but wanted to revel in the excitement just the same. Our cameras also got a peek inside the swanky upper level sky boxes.

Halftime Show with The Rockettes

The halftime show, produced by Radio City Music Hall, was titled "Something Grand." A dazzling 80s extravaganza complete with The Rockettes, cheerleaders, a hula hoop man, and you can hear Chubby Checker singing The Twist. It marked the first time a major performer made an appearance in a Super Bowl.

January 25, 1998 Qualcomm Stadium. Denver Broncos beat the Green Bay Packers 31-24. Before the big game, both teams fielded questions from journalists for Media Day. News 8's Kathy Chin was there and got pointers from SportsCenter anchor Chris Berman on how to get close to the NFL stars. She had trouble getting a glimpse of John Elway but caught a good shot of Brett Favre. News 8 also caught up with actress/model Rebecca Romijn who was there for MTV covering "important things like color schemes and hair-dos."

San Diego football fans keeping up with their teams online

As excitement for the big game built up, News 8's Bob Hansen spoke with locals who were supporting each team and following them on their official websites, the NFL's official site and various other online mediums. These websites look a bit different over 20 years later!

So much excitement leading up to Super Bowl XXXII. On Friday January 23, 1998 fans packed the downtown streets for live music of all sorts. Young and old partied the night away and sported their team attire. Go Broncos, go Packers!!

News 8's Kathy Chin went on a mission in search of super fans spending money and anticipating the game ahead.

January 26, 2003, Qualcomm Stadium. Tampa Bay Buccaneers defeated the Oakland Raiders 48-21. There was some concern there would be trouble in the streets of San Diego as the fans of the silver and black team came to town. George Stahlman, the owner of King Stahlman Bail Bonds was looking forward to it. He told News 8's Dan Cohen that the Oakland Raiders fans are crazy and wild, and they were going to do everything they could to let everyone know they were in town. There was a total of 84 arrests between the hours leading up to the game and the celebrations following the game. San Diego police said months of security planning and heavy police presence paid off. Police said there were very few problems.

How do you tell a Tampa Bay Bucs fan from an Oakland Raider fan? News 8's Jeff Goldberg took to the downtown streets to find out. Bucs fans said they had better team colors, were nicer people, and more confident their team was going to win. A Raiders fan said they were more loyal, and another said they were a lot mellower than they were. Former San Francisco 49-ers lineman Bubba Paris took a swipe at Raiders fans joking that they sleep in boxes, jail, at the border crossing, and Buccaneers fans have a tendency to sleep in their rooms.

Journalists from all over the world gathered to chat with the players. Among them were actors Mandy Moore and Raven Symone. A comedian pretending to be legendary promoter Don King was there to add comic relief. Number 91, Regan Upshaw told News 8's Phil Blauer he was having a ball chilling with the boys away from the wife and kids.

Victory was sweet for Tampa Bay Buccaneers fans partying in the streets of downtown San Diego post Super Bowl XXXVII. Twenty-seven years screamed one fan. Raiders fans shouted out their love for their team despite the loss. San Diego police said they had to break up some trouble after the game, but problems got taken care of quickly, and there were 135 Super Bowl related arrests. Former News 8 reporter and San Diego Police Department spokesman, David Cohen told News 8's Jeff Goldberg that "if you come in here to break the law, we're going to respond aggressively and quickly, and I think we've done that and I think it's helped."