21 hospitalized with injuries from fire, explosion on USS Bonhomme Richard at Naval Base San Diego

Seventeen sailors and four civilians were hospitalized with injuries, according to Navy officials. The cause of the fire remains under investigation. 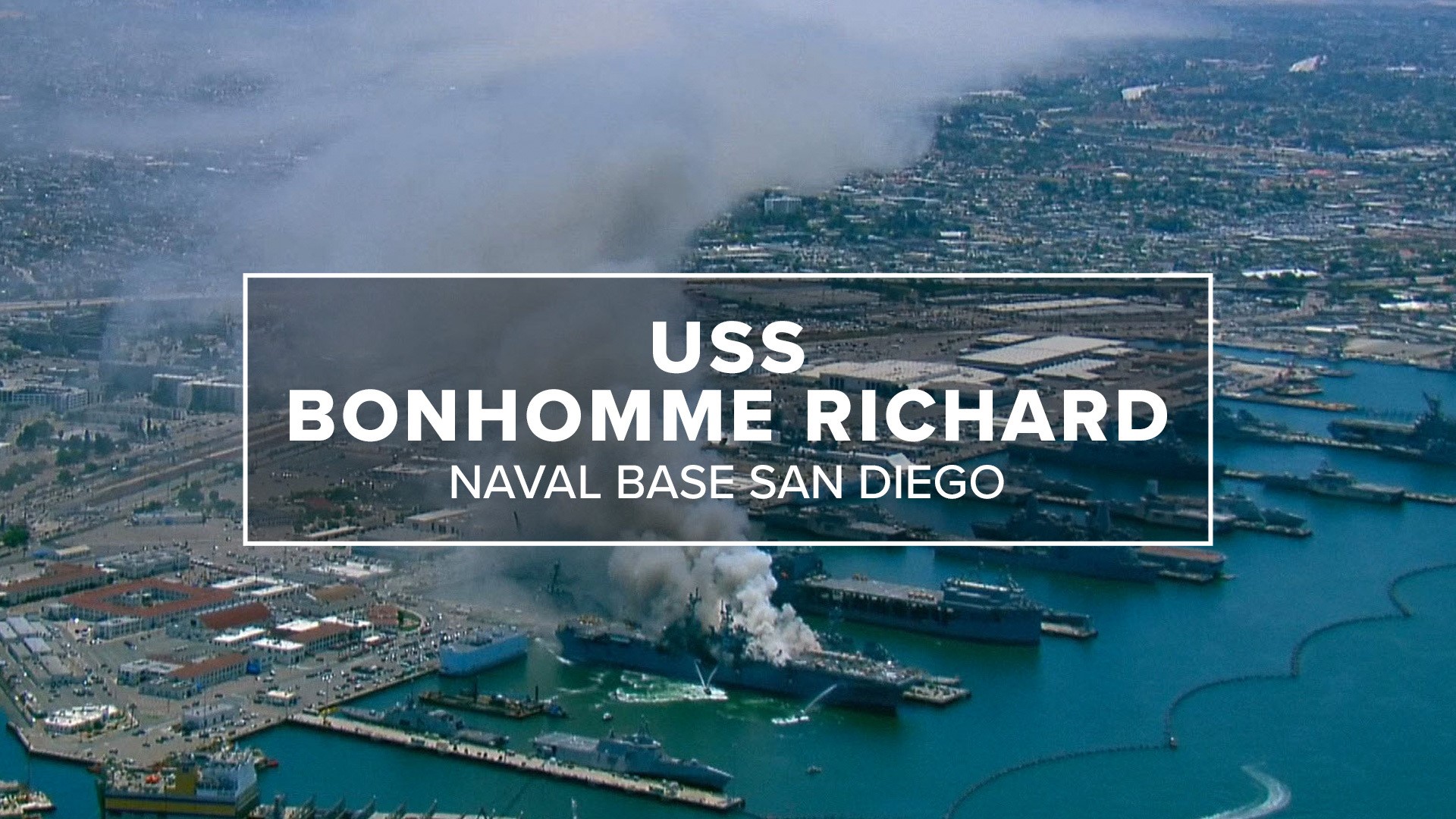 SAN DIEGO — Editor’s note: This story shows updates about a fire that broke out on the USS Bonhomme Richard (LHD 6) Sunday, July 12, 2020 at Naval Base San Diego. Click here for real-time updates for July 13, 2020 and on.

Fire crews continued battling a fire Sunday night onboard a Navy ship at Naval Base San Diego which injured sailors and civilians after it broke out Sunday morning, according to authorities.

At least 21 people were hospitalized with non-life-threatening injuries after the three-alarm fire on the USS Bonhomme Richard (LHD 6) was reported around 8:30 a.m., according to officials.

According to the Navy, there were 17 sailors and four civilians injured in the fire. At least 11 of the injuries were minor, according to officials. Many of the sailors were transported to Balboa Naval Medical Center

All sailors injured in the fire and a subsequent explosion were in stable condition as of Sunday evening according to Rear Adm. Philip Sobeck, commander of the Expeditionary Strike Group 3. Most suffered smoke inhalation and heat exhaustion. The admiral did not say if any had suffered burn injuries.

Just before 11 a.m., the San Diego Fire-Rescue Department reported the explosion on the ship which Adm. Sobeck confirmed Sunday evening who it could not yet be ascertained what caused the explosion.

According to Sobeck, the fire started in the lower vehicle storage area of the ship, but the cause remained under investigation.

Sobeck said a 1,800-foot perimeter had been established around the ship for safety reasons but that no ordnance - meaning weapons or ammunition - were on board.

Seventeen Sailors and four civilians are being treated for non-life threatening injuries at a local hospital. All inport ships have been contacted and directed to provide fire parties to possibly assist with firefighting efforts.

Sobeck praised the work of sailors and firefighting crews for their efforts to put out the fire and save the ship. He called the blaze a Class A fire and said debris was burning with smoke that posed no threat to nearby residents as of Sunday night.

"We're absolutely gonna make sure it sails again," he said.

The official Twitter account of Naval Surface Forces, U.S. Pacific Fleet stated that 160 sailors and officers were aboard the ship when the fire broke out.

"Everyone is off the ship and everyone is accounted for," said Brian O'Rourke, a Navy spokesman.

Sobeck asked that people keep the sailors in their thoughts and prayers.

PHOTOS: Fire crews responded to a fire and explosion onboard a Navy ship at Naval Base San Diego on Sunday, July 12, 2020

According to the Navy, two nearby ships - the USS Fitzgerald and USS Russell - were moved to a pier further from the Bonhomme Richard after 1 p.m. The USS Russell returned to San Diego this week.

As of 4 p.m., Federal Fire San Diego was the lead agency for firefighting efforts according to a statement from the Navy.

“Currently there are two firefighting teams fighting the fire aboard the ship,” said Federal Fire San Diego Division Chief Rob Bondurant. “Federal Fire is rotating their crews aboard the ship with U.S. Navy firefighting crews from the waterfront to fight the fire in order to find the seat of the fire and extinguish it.  Also, Navy Region Southwest tugs are also continuously combatting the fire from the bay”

Officials didn't immediately know where on the 840-foot amphibious assault vessel the fire was sparked, according to the Associated Press.

We are here for the sailors and civilians affected by the ship fire at Naval Base San Diego. @SDFD and other first responders continue to lend support. All of the crew is off the USS Bonhomme Richard and accounted for. Thank you to our brave sailors and rescue crews. https://t.co/jsOmWRZ0VL

SDFD assisted in battling the fire in a unified command with Federal Fire Sunday morning. The local fire agency was requested to assist in the location of 3455 Senn Street around 9 a.m., according to the department. Just after noon SDFD personnel were instructed to leave the pier. 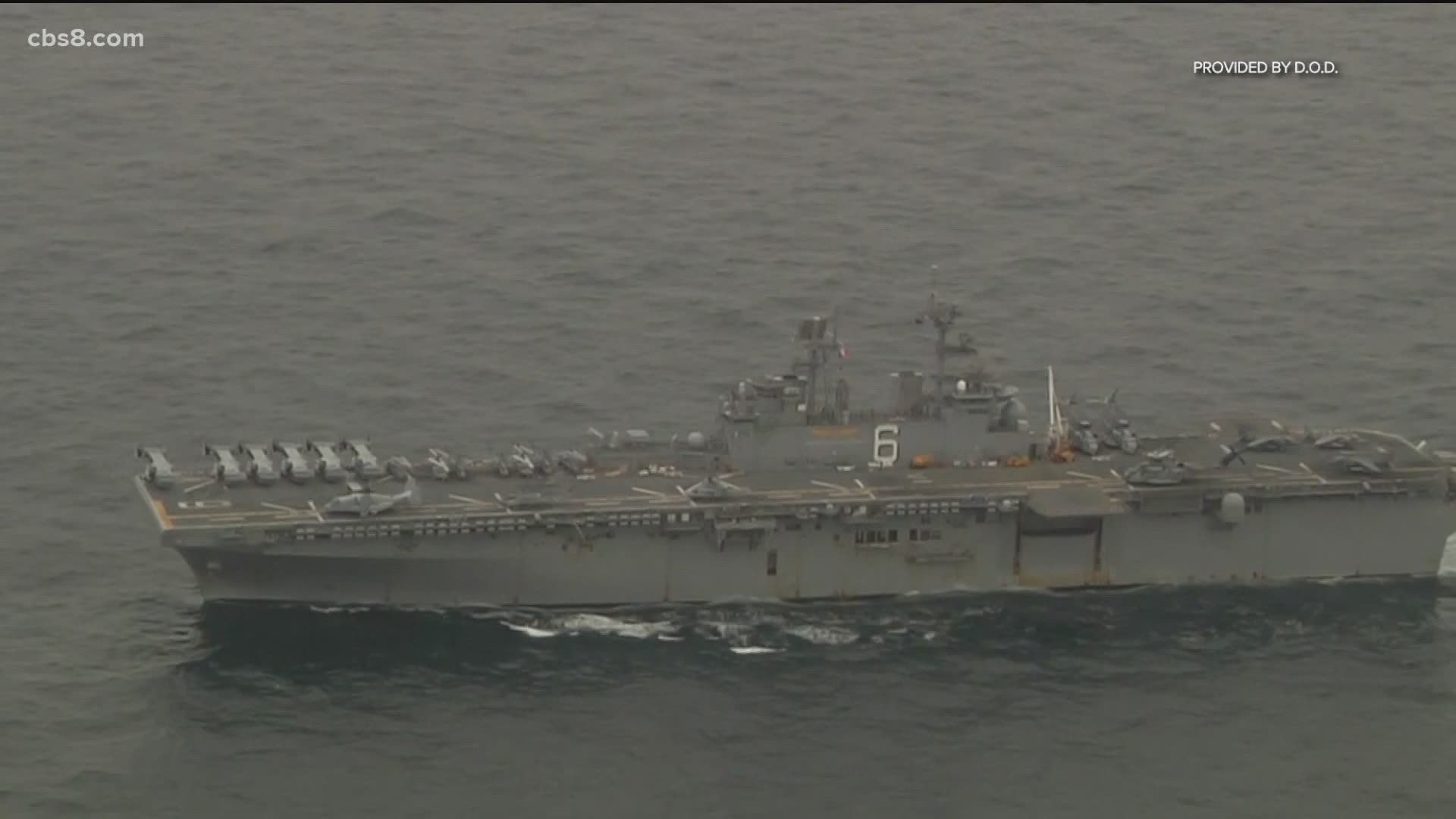 San Diego is the Bonhomme Richard’s home port and the ship was undergoing routine maintenance at the time of the fire. The ship has the capacity to deploy and land helicopters, smaller boats and amphibious vehicles.
The keel for the Bonhomme Richard was laid down in 1995 and she was delivered to the Navy in 1998.

Today, we suffered a terrible tragedy aboard USS Bonhomme Richard (LHD 6) when a fire broke out aboard the ship while in port San Diego. At this point, 17 Sailors and four civilians are being treated for non-life threatening injuries at a local hospital. 1/2

VIDEO: from a friend of mine who’s out on the water today. UPDATE: About 200 sailors were on board The USS Bonhomme Richard when the fire broke out; all are off the ship and accounted for; 11 people are hospitalized for what are being called minor injuries @CBS8 #shipfire pic.twitter.com/lAaXF2zMV9

Grateful no one was killed in this Navy ship fire. My husband was called into work for this one and I was called into work shortly after. Several of our Fire Family members were inside the USS Bonhomme Richard moments before an explosion onboard. 21 injured. Latest on @CBS8 pic.twitter.com/v5dqw0ppOj

Explosion with at least one injury at the USS Bonhomme Richard. #shipfire pic.twitter.com/HooWIRcjU4