Adam Shacknai is on the stand Monday morning, as testimony continues in the wrongful death lawsuit of Rebecca Zahau. 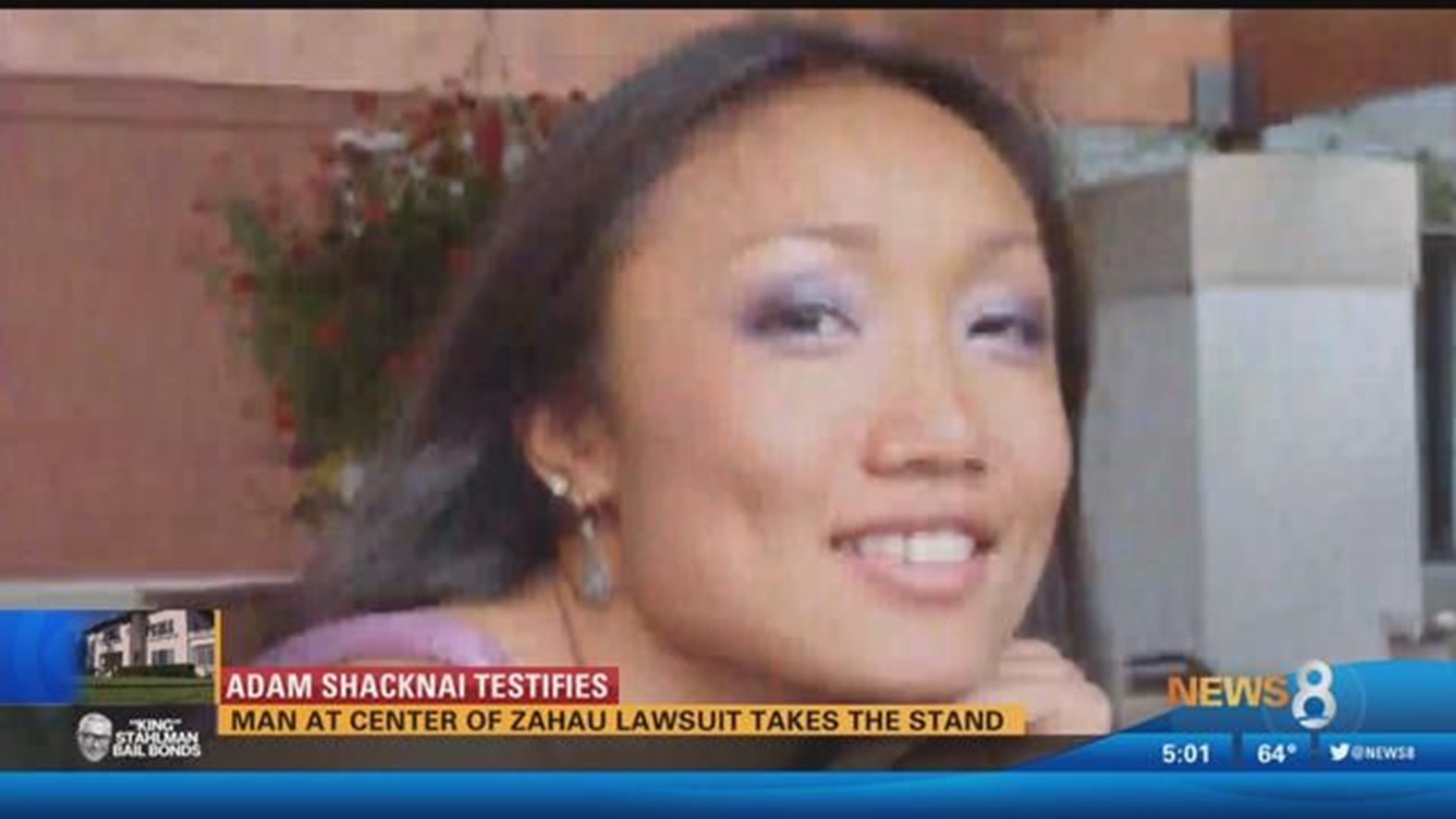 SAN DIEGO (NEWS 8) - Adam Shacknai was on the stand Monday, as testimony continued in the wrongful death lawsuit of Rebecca Zahau.

Rebecca's death happened July 13, 2011, two days after 6-year-old Max, the son of Jonah Shacknai, took a fatal fall in the same home while Rebecca was babysitting.

Adam Shacknai's testimony Monday included details about what he said he saw upon finding Zahau's body. While being questioned by the Zahau family's lawyer, Keith Greer, Adam testified that he saw Rebecca hanging first thing in the morning, cut her down and placed her on the grass where he tried to administer CPR.

Greer asked Adam if he remembered loosening ropes that were around Rebecca's wrists in order to check for a pulse. He testified that he tried to put his fingers under the ropes to find her pulse but didn't intentionally loosen them.

Adam was asked if he called or sent a text his brother Jonah to tell him what had happened, and Adam said he did not recall. He testified that when he did speak to his brother that morning he did not tell him the manner in which Rebecca had died.

During cross-examination, Adam's lawyer, Dan Webb, opened by asking if he did anything to "participate in the death of Rebecca Zahau."

"Most certainly not," Adam said.

Adam was then asked if he left the guest house he was staying in to go into the main house at any time during the evening of July 12, 2011 or the early morning of July 13, 2011. He replied that he did not.

Webb also asked about his background, where he grew up and if he had a stable and happy upbringing. Adam stated that he did.

Adam also testified that he had a good relationship with Jonah while they were growing up.

Questioning then turned to Adam's adult life. He testified about his long-term romantic relationship with a woman named Mary Bedwell and their life together in Memphis, Tennessee.

Webb asked about his career path, education and other personal details.

Adam Shacknai testified about working on the Mississippi River for over 28 years as a dock hand and tug boat pilot. Webb inquired about the types of knots he is familiar with, specifically a "clove hitch knot," "ring hitch knot," "cow hitch knot" and "lark's head knot," all of which Adam said he could not tie and did not use in his job.

Webb then asked if he had ever been arrested. He said he had been and described an incident of turning right on a red light and having something come up with his insurance that resulted in an arrest, but said the case was dismissed.

Testimony then moved to Adam Shacknai's relationship with Jonah Shacknai's son Max prior to his death. Adam described spending time with Max and playing sports.

Adam then described getting a call from his own father on July 11, 2011 when he informed Adam of Max's fall at Jonah's home. He said his father told him there were tests being run but the situation seemed grave.

Adam testified that he had never heard his father sound that upset and that he subsequently called Rebecca Zahau to get any updates on Max's condition. He also said he spoke to Rebecca about travelling to San Diego to be with Jonah.

Adam said that his relationship with Rebecca was "cordial" and "friendly." He also testified that she encouraged him to travel to San Diego.

Questioning then turned to how Adam and Rebecca had interacted over the years. Adam said they had met on several occasions and each time spent several days together on various family trips.

Adam testified that he had liked Rebecca and he believed she liked him.

Webb asked if they had ever had an argument or exchanged "cross words."

When asked how the relationship between Rebecca and Jonah Shacknai seemed on those family trips, Adam stated that it "seemed good."

Adam then testified that he ultimately decided to fly to San Diego following Max's accident and that he arrived in the afternoon of July 12, 2011.

According to his testimony, Rebecca insisted on picking Adam up at the airport. They then drove to Rady Children's Hospital where Max was.

At the hospital, Adam said they saw Jonah and a friend of his named Howard Luber.

Webb asked about their next actions and Adam stated that the four drove to the airport because Luber was heading home.

Next, Adam said he, Jonah and Rebecca went to a seafood restaurant to eat. He described the mood as "somber."

Adam stated that they then returned to the area of the hospital and Jonah showed them where he was staying, which was at the Ronald McDonald House across the street from the hospital.

Adam testified that he left the couple alone for a time before Rebecca and Adam left Jonah and drove to the Coronado mansion. He said he believed they arrived around 7:45 p.m. in the evening.

Webb then presented a diagram depicting Jonah Shacknai's residence. He asked Adam about where they parked the car and where they went once they arrived.

Adam testified that he went directly to the guest house.

The lawyer asked if they had any sort of fight or argument at that time, which Adam said they did not.

Adam testified that he was tired after travelling to San Diego and thus went to the guest house, took a shower and went to bed by 9 p.m.

Questioning then moved to Adam's actions after finding Rebecca's body. Adam testified that he had spoken voluntarily to a police officer who asked about his actions that morning.

Adam testified that "with some embarrassment and hesitation" he told the officer he had masturbated that morning before finding Rebecca's body. He also stated that believes he took a shower.

Next, Adam said that he left the guest house and intended to walk to a nearby area to get a cup of coffee.

It was at that time that Adam said he saw Rebecca's body hanging from the second-story balcony.

Adam said he called 911 immediately after seeing her body.

After a lunch break, court resumed, and Webb played the 911 tape.

Webb then questioned him about what happened after first-responders got to the home.

Adam testified that he "backed off" and let them take over.

Next, Adam said that he went to a mobile center the police had established near the home in an RV type of vehicle.

He stated that he made several phone calls there including, he believes, calls to his girlfriend Mary Bedwell, Jonah Shacknai, Mary Zahau and someone named Doug.

Adam testified that he had never met Mary Zahau before.

Webb then presented a photograph of the courtyard outside Jonah Shacknai's mansion where Zahau's body was located when emergency crews arrived.

While viewing the photo, Webb asked him to confirm if it depicted the table he stood on to cut down Rebecca's body, the rope which he cut that hung from the balcony and if the placement of Rebecca's body in the photo was consistent with where he had placed her after cutting her down. Adam confirmed each of these.

The photo also showed a knife which Adam said was the knife he retrieved from the kitchen to cut Rebecca down.

Next, Adam testified that police asked him to go with them and he was taken to the Coronado police station.

Adam testified that he was questioned for about 90 minutes and that he answered all questions. He also said he never asked for a lawyer.

Webb asked if he agreed to "physical processing" of his body after he was questioned. He stated that he did.

Adam testified that he gave his fingerprints, handed over the shoes he was wearing but said he wasn't sure if he gave a DNA sample.

Questioning then turned to the rest of Adam's time in San Diego. He testified that he remained in town for several days to be with the family and visit Max at the hospital.

Adam testified that he was at the hospital the day Max was taken off life support and that he went with his family to Phoenix, Arizona, for the funeral.

After Webb was done questioning him, Greer got the opportunity to ask additional questions.

The Zahau family's lawyer asked Adam about knots he is familiar with and uses in his work.

Next, Greer asked Adam if in July of 2011 if he believed Rebecca was responsible for Max's death. He said he did not.

Greer asked Adam if he was wearing gloves when he cut Rebecca down. He said he did not.

Greer questioned Adam about the positioning of Rebecca's body when he found her hanging. Adam testified that he wasn't sure how high her feet were off the ground. He stated he didn't believe he could cut her down by standing on the ground so he retrieved a table and stood on it in order to cut the rope.

Adam Shacknai was excused from the stand just before 2 p.m.

The civil trial is expected to last several more days.