After the platoon finished the 54-hour “evolution,” each recruit received their Eagle, Globe and Anchor emblem and were called Marine for the first time. 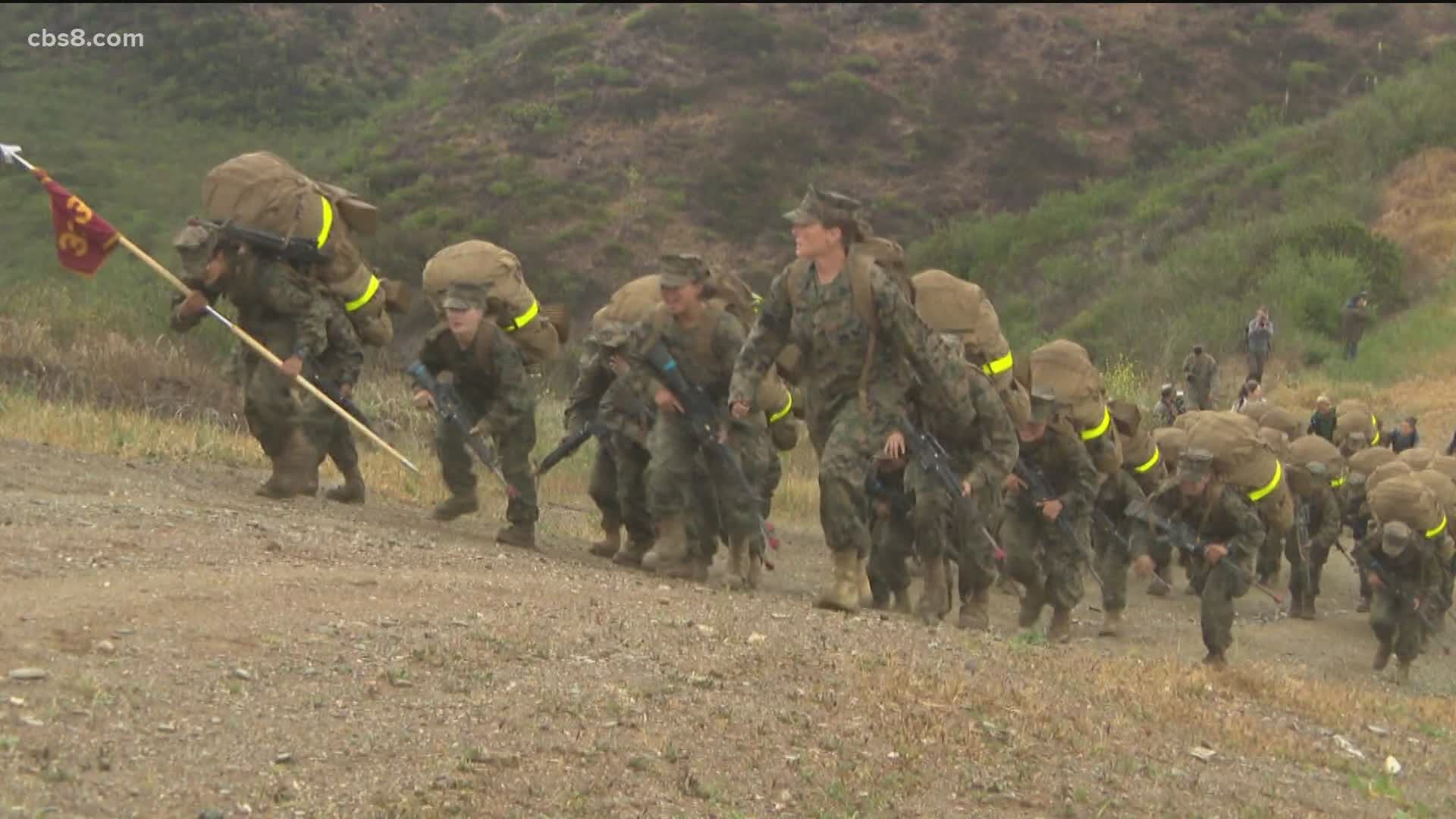 CAMP PENDLETON NORTH, Calif — Women became Marines for the first time at Marine Corps Recruit Depot, San Diego. The 53 women out of nearly 400 recruits completed the rigorous, first co-ed bootcamp at Camp Pendleton after 13 weeks of training and getting pushed to the limit.

Thursday marks the first time in its 100-year history that a platoon of both men and women from MCRD San Diego went through ‘The Crucible.’

“I am in pain of course, but I am also feeling very proud and confident we made history, and it feels quite amazing. Despite my injuries, I refused on that part, and I made it up that reaper today,” Auldridge said.

'This was the first time that female recruits were made Marines on top of this hill. A lot of people say that we couldn’t train females here at Marine Corps Recruit Depot san Diego specifically because of the hills at Camp Pendleton, but I think that the 53 young ladies, who are standing here are proof today that it is not true," said Bariletti who has completed the 45-mile hike 25 times in his 19-year career as a Marine at age 41.

Hearing the loud grunts and seeing fellow recruits help their team along the way, the steep Oceanside hills were far from easy.

“That was the hardest hike I’ve ever done. I would get over one and say oh this has got to be the last hill…and then I would see another hill. It seemed to just get steeper and steeper, and I thought I was halfway through, but it was just the curve and really hard and made me feel the burn in my legs,” said 19-year-old Poway Native Pvt. AnneMargret Frazier.

Frazier attended Miramar College for a year before following in her Marine father's footsteps to becoming a Marine. She has six brothers mainly in the Navy, but her father is a retired Master Sgt. and was a drill instructor. Frazier says she is grateful she got to train for the first time ever in her hometown.

"I was expecting to go to Parris Island, but when I was told I was going to San Diego, and I would be making history it is something that I could not pass up,” Frazier said with a bright smile.

Part of the grueling “Crucible,” the platoon went 54-hours straight with only 3 meals and 3 hours of sleep each night all while carrying 55-pound bags filled with gear and holding a rifle.

"They received their Eagle, Globe and Anchor, which is the coveted symbol of the United States Marine Corps,” Bariletti said.

The symbol brought tears to many Marine's eyes as they got to the momentous point of transferring from civilian to Marine. The group joined together to sing the Marines’ Hymn ending with, “Ever look on Heaven's scenes, they will find the streets are guarded by United States Marines.”

The painstaking task wasn’t over yet. The newly named Marines had to walk 4.5 miles back the Camp Pendleton barracks before they were officially done for the day and could enjoy the “Warrior’s Breakfast.” The Lima Company will have some time off before officially graduating on May 6th.

According to the Marines, “The Crucible takes place over 54-hours and includes food and sleep deprivation and over 45 miles of marching. Recruits will only get eight hours of sleep during the entire 54-hour training. The Crucible event pits teams of recruits against a barrage of day and night events requiring every recruit to work together to solve problems, overcome obstacles, and help each other along the way. The obstacles they face include long marches, combat assault courses, the leadership reaction course, and the team-building warrior stations. The bottom line is this—the Crucible is a rite of passage that, through shared sacrifice, recruits will never forget. With that memory and the core values learned in recruit training, they will be able to face any challenges in their path.”