The Navy is currently working to move nearly 3,000 of the ship's sailors off the USS Theodore Roosevelt. 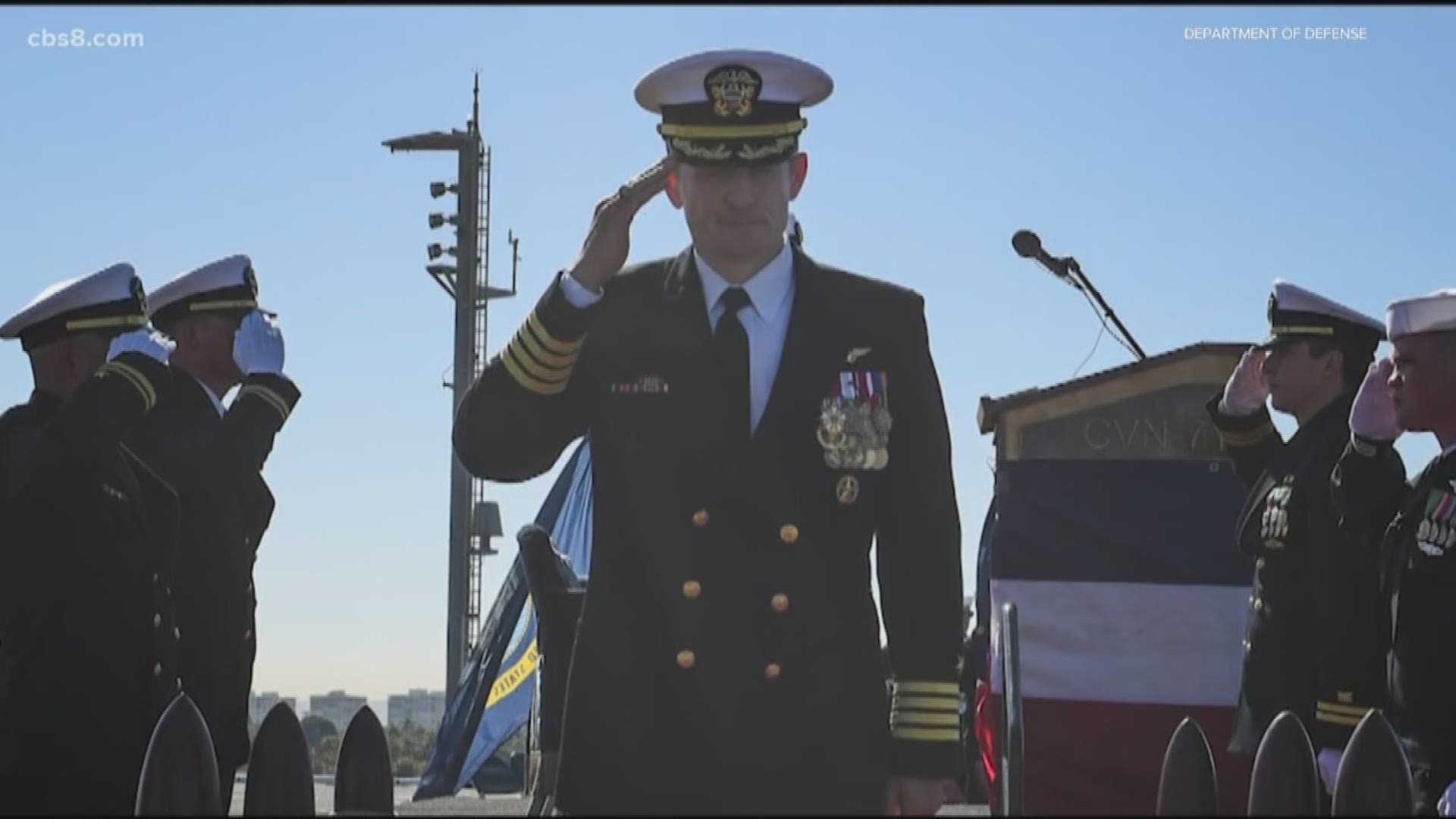 SAN DIEGO — The captain of a San Diego-based nuclear aircraft carrier was relieved of duty Thursday by the U.S. Navy in the wake of his request in a highly-publicized letter for more resources and "decisive action" from Navy leadership as the ship's crew battles a coronavirus outbreak while docked in Guam.

Acting Navy Secretary Thomas Modly and Adm. Michael M. Gilday said during a Pentagon news conference that the Navy "lost confidence" in Capt. Brett Crozier's leadership following his letter to Navy brass asking to immediately offload the majority of the ship's crew once COVID-19 cases began cropping up onboard.

Though Modly credited Crozier for voicing his concerns, he said Crozier's letter misrepresented the state of the situation onboard, incited panic, and created the perception that the Navy was only responding to assist the sailors because of his letter.

The Navy is currently working to move nearly 3,000 of the ship's sailors off the USS Theodore Roosevelt.

Currently, 114 sailors from the Roosevelt have tested positive for COVID-19, Modly said. He said most are displaying mild symptoms and none have required hospitalization.

Among the sailors is Shanitlly's son. News 8 is not identifying him or using her last name because he is still serving on a ship that is actively deployed.

"I can just kind of hear the fear in his voice. Today he spoke very low. I know he was sneaking on the phone," said Shantilly.

According to  Shantilly, her son is asymptomatic, but medical staff said he can spread the virus, so he, like others, are isolated at on-base hotel. She said she is glad he is getting the care he needs.

Shantilly is also glad the captain spoke out.

"This child is my fifth pregnancy. I lost four babies before him. I don't want to lose my son," she said.

On Wednesday, Modly said Crozier was unlikely to face retaliation for requesting help from leadership, but on Thursday, he said Crozier sent his letter out "pretty broadly" and not securely enough to prevent the possibility of it being leaked to the public.

Modly said Crozier sent the letter up the chain of command, but also copied the email to "20 or 30 other people," which may have been conducive to its eventual leak to the media.

Modly said he has no information to suggest Crozier directly leaked the letter, which first appeared in the San Francisco Chronicle on Monday. Modly did note that the letter was first publicized in Crozier's "hometown paper." Crozier is a Santa Rosa native.

Modly said the decision was solely his and he received no direction from the White House to relieve Crozier, who he said "raised alarm bells unnecessarily" and "demonstrated extremely poor judgment in the middle of a crisis."

Cozier's letter stated the COVID-19 infection aboard his ship would spiral if immediate action was not taken. Modly said similar concerns were also expressed by the ship's medical team.

Though most of the sailors will be moved off the ship, about 1,000 sailors will need to remain onboard to maintain certain critical functions and security for the ship, Modly said.

In his letter, Crozier recommended that about 10% of the sailors remain onboard "to run the reactor plant, sanitize the ship, ensure security, and provide for contingency response to emergencies."

Modly said Wednesday that the Navy "cannot and will not remove all of the sailors from the ship and that's not what the commanding officer requested either, nor the medical team. Our plan has always been to remove as much of the crew as we can while maintaining for the ship's safety."

In his letter, Crozier said the crew had undertaken some measures to slow the virus' spread, including moving a small percentage of the crew off- ship, increasing cleaning of the ship and attempting social distancing wherever possible.

However, he warned, "The current strategy will only slow the spread. The current plan in execution on TR will not achieve virus eradication on any timeline."

Crozier wrote that the ship had only two courses of action: immediately reduce the number of sailors onboard or "maximize warfighting readiness and capacity as quickly as possible."