Exceptional Drought: Why the Western United States is rooting for Lake Powell

Part 1: The nation's second-largest man-made reservoir is projected to drop to the lowest level since it was filled in the 1960s. 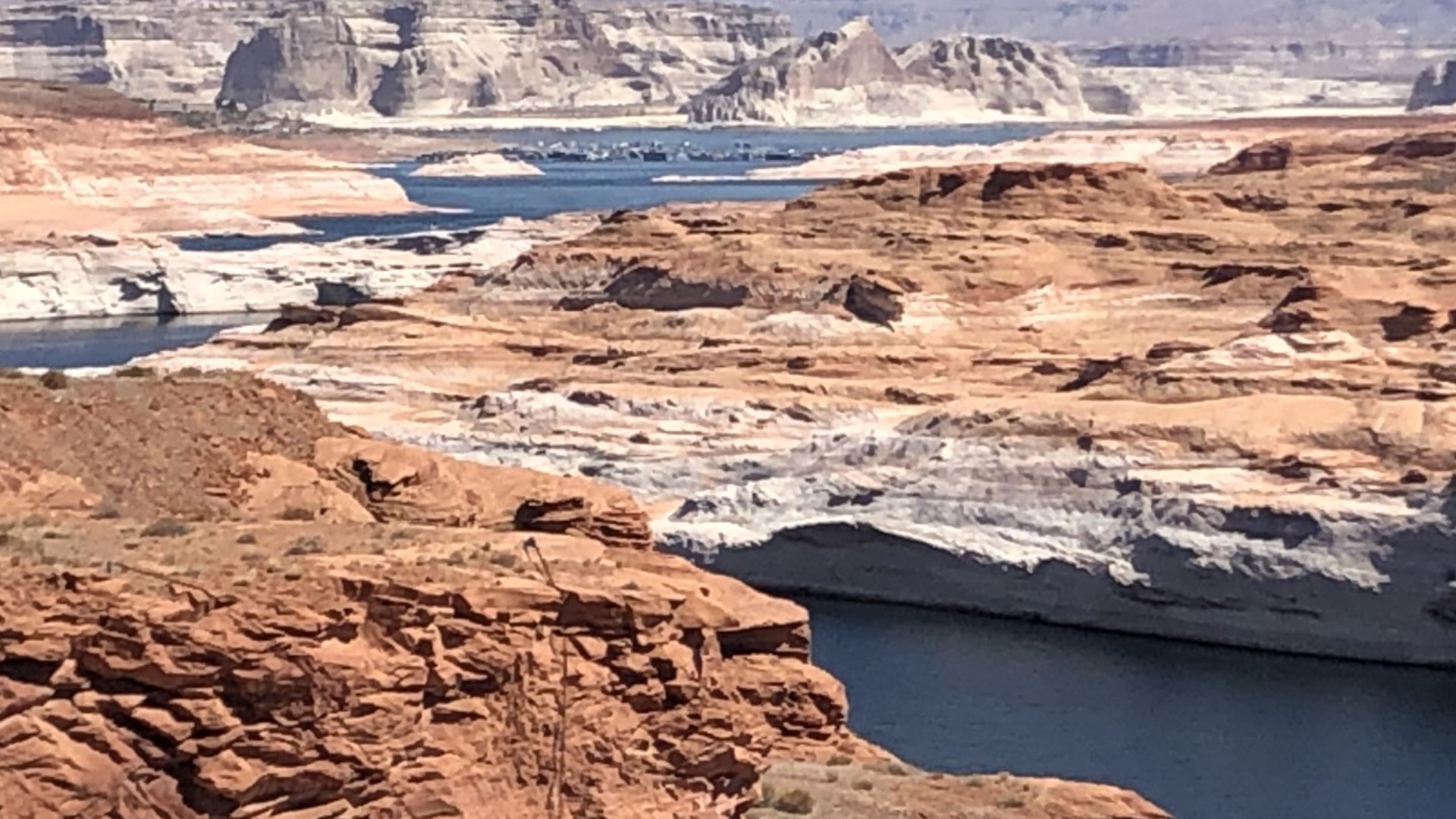 LAKE POWELL, Ariz. — The power grid, water supply, food, livestock, and life as we know it are all in the grip of a near historic drought this year. The impact of this summer's heat extends across the U.S but is most severely felt in Western states. Lake Powell is critical for supplying drinking water to the Western United States and could soon drop to its lowest levels ever.

This is part one of a three-part series in which reporter Jeff Zevely went to Lake Powell to see first-hand how extreme heat will affect millions of families.

Lake Powell sits on the Utah and Arizona border. Take one look at America's second-largest man-made reservoir and you can see what's wrong. "Well, we call it the bathtub ring. You can see the top of the white behind me, that's when the lake is full," said Bryan Hill, General Manager of Page Utility Enterprises.

Hill was referring to the sandstone cliffs that line Lake Powell. The discoloration of the cliffs shows how high the waterline used to be in the 1980s and how low that line is now during the Megadrought where the lake is down to 38 percent capacity.

"Water is the lifeblood of the Southwest," said Hill. "There's 30 million people relying on what is behind us here."

Low water levels at Lake Powell have revealed several shipwrecks and the shoreline is changing. Up and down the lake, hundreds of miles of new beaches have been exposed. People who are camping on this newly found sand would have been underwater a year ago.

So where did the water go? To explain we need to head from the bottom of Lake Powell to the top of the Rocky Mountains.  The reservoir relies on Rocky Mountain runoff, but scientists say we are in the driest 22-year period in centuries. The Southwest needs more rain and snowfall.

This leads us back to the bathtub ring and the discoloration on the rock that tells a story. From the early 1980s until last year the lake dropped 120 feet, but in the last year alone the lake dropped an alarming additional 30 feet.

"It's just not producing enough water at the rate we are taking it out of," said Keegan Murphy who works for Hidden Canyon Kayak. We met Keegan on a boat launch ramp. He told us where we would not have been standing a year ago.

"To me it's devastating to see it this low. It really is shocking to see just how low the water levels are," said Tim Morony who is a longtime lake goer. His dad Tom worked at the Glen Canyon Dam for 18 years.

The dam was built in the 1950s to capture water from the Colorado River and form Lake Powell. Tom offered these words to the people who live on the West coast, "I'm hopeful they can do more on the way of water conservation."

We met boaters at Wahweap Marina which is filled with houseboats and activities. "More water is going out than is coming in," said Malcolm Begay who has been fishing at Lake Powell his whole life.

We asked Malcolm if he felt big cities in the Western states are using more water than they should. "Yes, basically," said Malcolm.

The Glen Canyon Dam can take and hold water all the way to the brim of its towering walls, but those who manage the dam said they have not received water at that level since 1983.

Across the Southwest, most climate scientists agree that the Exceptional Drought is tied to climate change. During our visit, the temperature ranged from 106 to 108 degrees. We poured about a cup's worth of bottled drinking water on the sidewalk and watched it evaporate in less than three minutes. Heat that intense steals moisture from the soil.

"Agriculture uses a lot of water let's face it. We grow a lot of food down around the Yuma area," said Bryan Hill.  Along with an increased wildfire risk, farmers are losing crops which could lead to rising food prices. When asked if the drought could affect the economy Hill said, "I think so."

A reduction of water flowing through the Glen Canyon Dam means a reduction of power generated to the Southwest. "New Mexico, Colorado, Utah, Nevada, California and Arizona," said Hill.

Lake Powell is projected to drop to its lowest level since it was filled in the 1960s. That is water seven states must share according to the Colorado River Compact of 1922. "Try to conserve water, please for everybody because it's just going to get worse and at this rate this lake is dropping, it is not going to exist in ten years and then what do we do?" asked Keegan Murphy.

"Something has got to change," said Hill who told us either more rain and snow must fall, or people must use less water. When asked how people on the West Coast could save water Hill suggested that the green lawn may have to go.

The desert southwest is a beautiful place to live, but it's just that a desert.

"I think this should be on everyone's mind. We are going to have to be smarter with our water," said Hill. "This is going to be a very difficult thing to buy our way out of. You can print money; the Central Banks can print money. You can't print water."

In early July, record-breaking temperatures across the Western United States forced California's Governor Gavin Newsom to call on all Californians to voluntarily reduce their water use by 15 percent.