Even if the community succeeds in keeping Douglas Badger out of their El Cajon community after Tuesday's court hearing, their fight may still not be over. 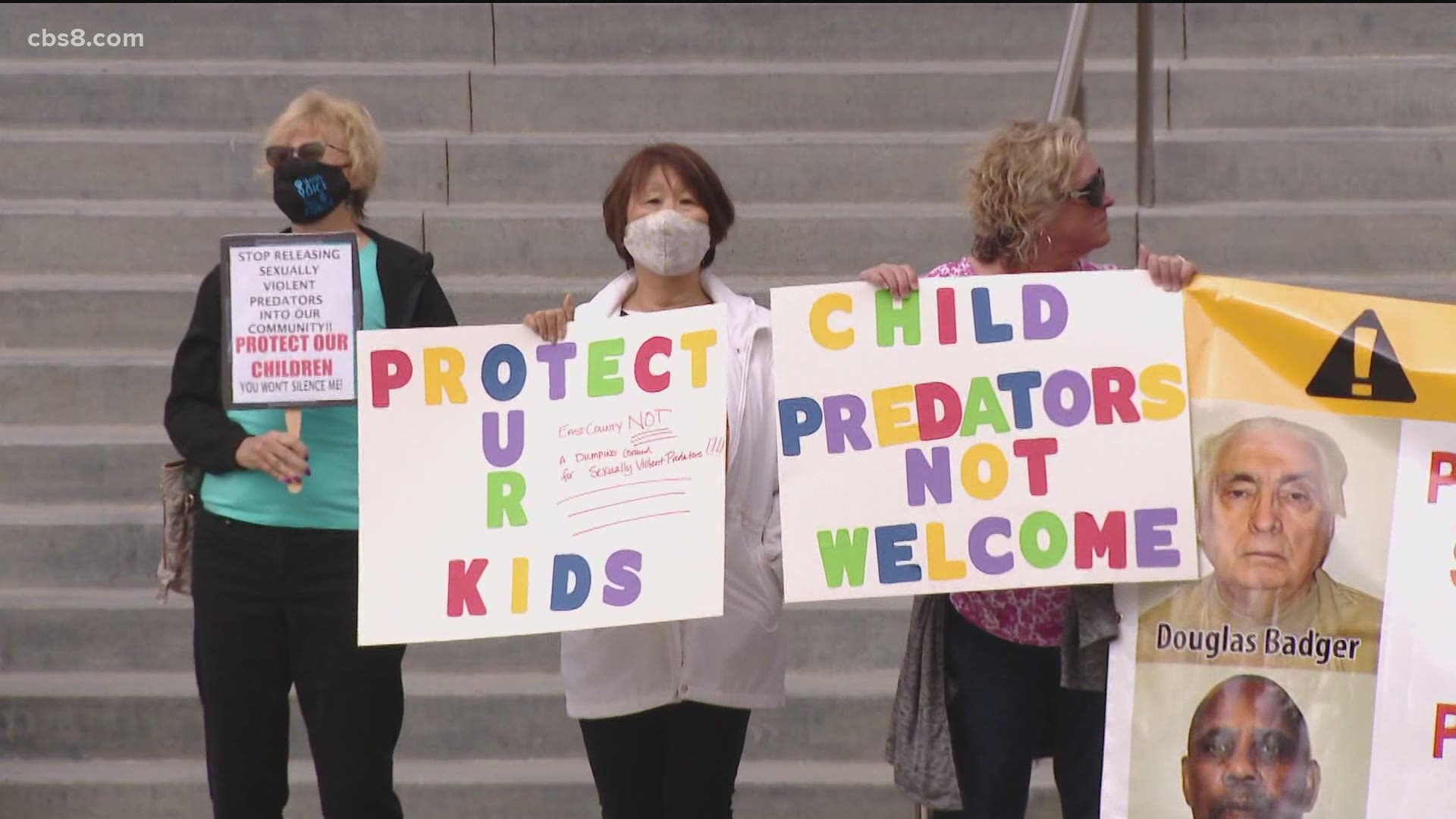 EL CAJON, Calif. — An East County community's battle to keep a sexually violent predator out of their kid-friendly neighborhood went before a judge Tuesday morning.

The state has proposed placing 78-year-old Douglas Badger, whose violent sexual crimes go back half a century, in a home in unincorporated El Cajon, surrounded by schools and daycares.

Passionate opponents of this proposal plan to gather outside the downtown courthouse Tuesday morning to make their voices heard.

"I'm angry at the way this has been handled," said neighbor Sarah Thompson. "I feel like we've been completely blindsided by all of this."

Thompson and her 8-year-old son live just down the street from the home on Mt. Helix where the state has recommended Badger be placed.

The 78-year-old, diagnosed with schizophrenia and sexual sadism, has a criminal history dating back to the 1970s that includes child molestation, rape, kidnapping and forcible oral copulation, as well as sexually assaulting male hitchhikers.

"I know in my heart that this is not the place to put a man like this," Thompson told News 8. "Not in our community... not really in any community."

For the past two decades, Badger has been in state mental hospitals.

He had petitioned for release to a home in Campo in 2013: a request that was later withdrawn following widespread community opposition. That was similar to the fierce opposition he faces now in an El Cajon neighborhood, filled with nearby daycares and home schools.

"Every single family I've talked with said they'd have to install massive security systems," Thompsons added. "I'm planning on going with a group of girls to the gun range."

"We've been victorious in the past in stopping these things," said state Senator Brian Jones, whose district includes El Cajon. "We're doing everything we can to stop it tomorrow."

"If these guys are going to be paroled and can't be paroled on state prison grounds, which I think is the best idea, then let's find a place very remote where they are not a danger to society and really not a danger to themselves too," Jones said.

"It's going to be like living in terror basically every day," Thompson said. "We're never really going to be able to let our kids play outside alone."

The other concern is why the East County?

“It’s a sexual masochistic disorder, and the recidivism rate for this kind of disorder is extremely high,  and there’s really no curing this kind of individual, they almost always re-offend, so why would you put a person like this in a neighborhood with children?” Wells said.

Wells added that he and other local lawmakers will not stop fighting to ensure Badger is relocated elsewhere.

"We are going to put so much pressure on the judge and the parole department that I think we will definitely win this," Wells said.

Even if the community succeeds in keeping Douglas Badger out of their community, the fight may not be over. They've also learned that the state has proposed placing yet another sexually violent predator, 63-year-old Merle Wade Wakefield, in the same home.