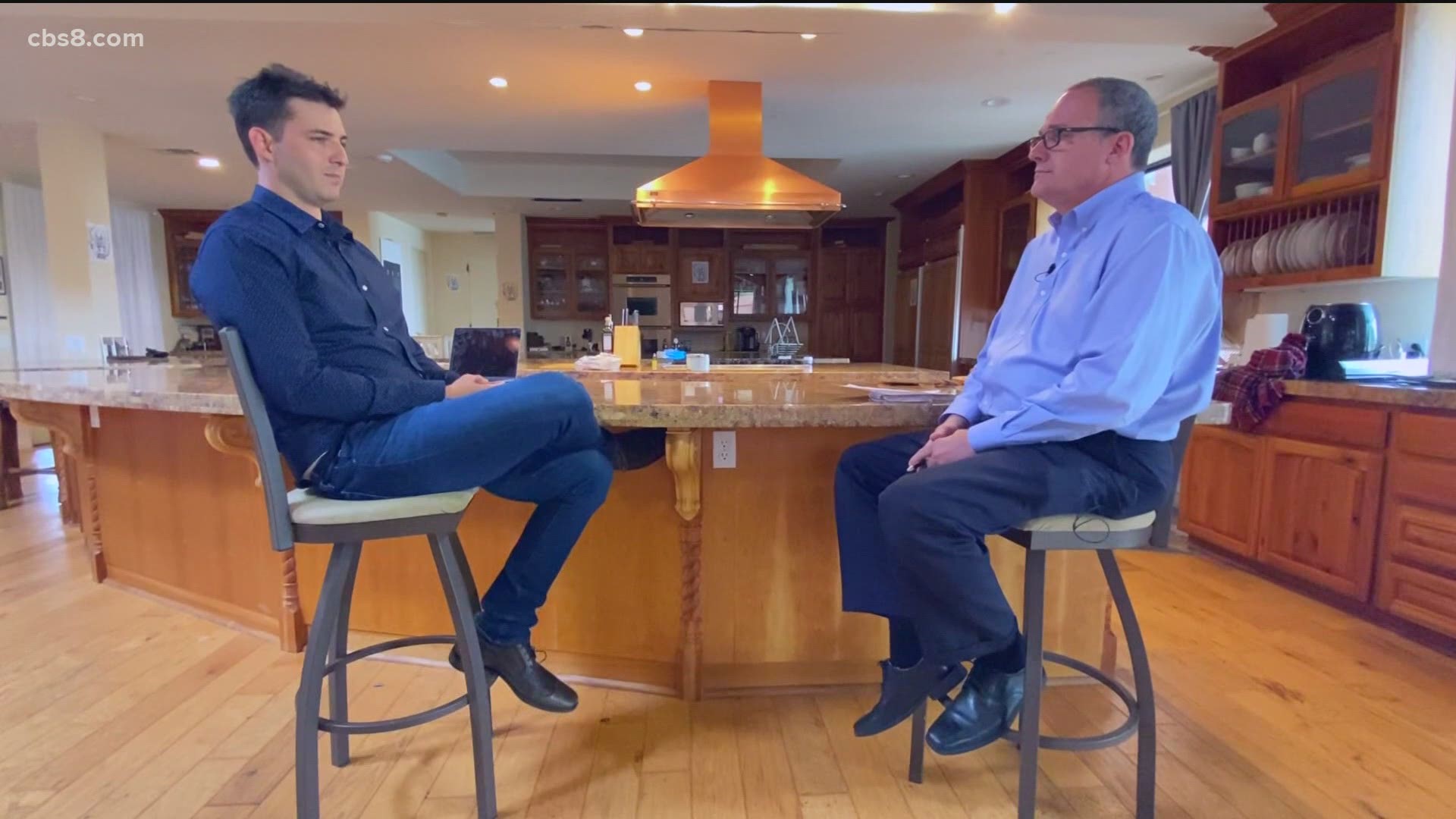 SAN DIEGO — It has been one year since Lydia “Dia” Abrams, a former La Jolla resident, went missing from her multi-million-dollar ranch near Idyllwild.

Her son, Clinton Abrams, is speaking publicly about the case for the first time in hopes of finding his mother.

“I want people to know that she was the kindest, gentlest, soft-hearted person that you could imagine,” said Clinton Abrams, 31, during an interview at his home in La Jolla.

Dia Abrams was the wife of La Jolla developer, Clem Abrams, who passed away in December 2018.

The couple had two children, Clinton and Crisara. Dia Abrams was living on the sprawling Bonita Vista Ranch in Mountain Center at the time of her husband’s death.

“She was a lover of animals. She was always taking in anybody or anything that really needed help,” her son recalled.

Abrams was last seen on Saturday, June 6, 2020. That morning, the 65-year-old had paid a visit to a next-door neighbor.

“She woke up early, baked cinnamon rolls and delivered them to her good neighbor,” said Clinton Abrams.

The last person to see Abrams -- around 2:30 p.m. in the afternoon -- was Keith Harper, a ranch hand who lived on the property and who has claimed to be Abrams' fiancé.

“It was definitely not the case. I know my mother. She was not engaged. She would not remarry,” said Clinton Abrams.

On Sunday, June 7, 2020, neighbors fanned out across the 117-acre ranch, on foot and on horseback, but they found no trace of Abrams.

Her truck, purse and cell phone were left at the ranch.

Clinton Abrams drove up from La Jolla and arrived Sunday night, when he said he met Harper for the first time.

“He was very shifty, reluctantly speaking, kept stating he had meetings and he couldn't be there. He left the following morning,” said Abrams’ son.

At 8:30 a.m. on Monday, Harper packed up and left the ranch, driving his RV through Arizona and into New Mexico.

“It's unsettling to me that on the morning that the search and rescue team arrived, and the homicide unit arrived, Harper was not there. He had fled,” said Clinton Abrams.

The Riverside Mountain Rescue Unit searched the ranch for two days using dogs and found nothing.

Officers soon discovered Abrams had transferred her three properties into a trust, two weeks before she went missing. The beneficiaries of that trust were Keith Harper and a neighbor in Garner Valley named Diana Fedder, court records showed.

“It's been the absolute, most nightmarish, difficult, soul-draining experience of our entire lives. There's no question about that,” said Clinton Abrams.

Clinton and his sister Crisara also had been written out of their mother's trust in a partially-handwritten clause that read, “Trustor leaves nothing but her love and affection to her son, Clinton Abrams, and daughter Crisara Abrams."

“I take that in a positive light, personally,” said Clinton Abrams, referring to the line written in the trust. “I don’t think it was intended to be that way permanently at all.”

The handwritten clause was dated December 12, 2018, the date of Clem Abrams’ death.

Clinton and his sister are now challenging the restated trust in court, claiming the handwritten addition was illegal.

“The 2018 Trust Interlineations, even if written by [Abrams], have no legal effect since they were not signed,” according to a petition filed on behalf of Crisara Abrams on May 21 in Riverside County Probate Court.

The Abrams siblings are asking the judge to remove Harper as trustee of their mother’s estate and install an independent fiduciary.

“I believe it was ill gotten, with mal-intention, and my concerns are that her stuff is being pilfered and taken and stolen,” said Clinton Abrams.

In April, the attorney who drew up Abrams’ trust, Dennis J. Healey, told News 8, “Dia did the trust. She knew what she was doing. The document speaks for itself... So, we think that her wishes should be honored.”

Keith Harper recently filed a motion, in pro per, to dismiss the case. Hearings in Riverside probate court currently are set for July 21 and 22.

“I believe she was murdered and we need to find her for her soul to rest in peace,” Clinton Abrams said.

The son said he decided to speak out in the news media – after being warned against it by Riverside Sheriff – because he believes somebody has information on where his mother’s remains may be found.

Keith Harper continues to live on Abrams’ ranch near Idyllwild, according to neighbors. He did not respond to a message from News 8 seeking comment for this report.

WATCH RELATED: Where is Dia Abrams? News 8 interviews a trustee to her Idyllwild estate. (March 2021)