Where is Dia Abrams? Search launched for woman missing from her ranch near Idyllwild

The former La Jolla millionaire has been missing for 8 months. 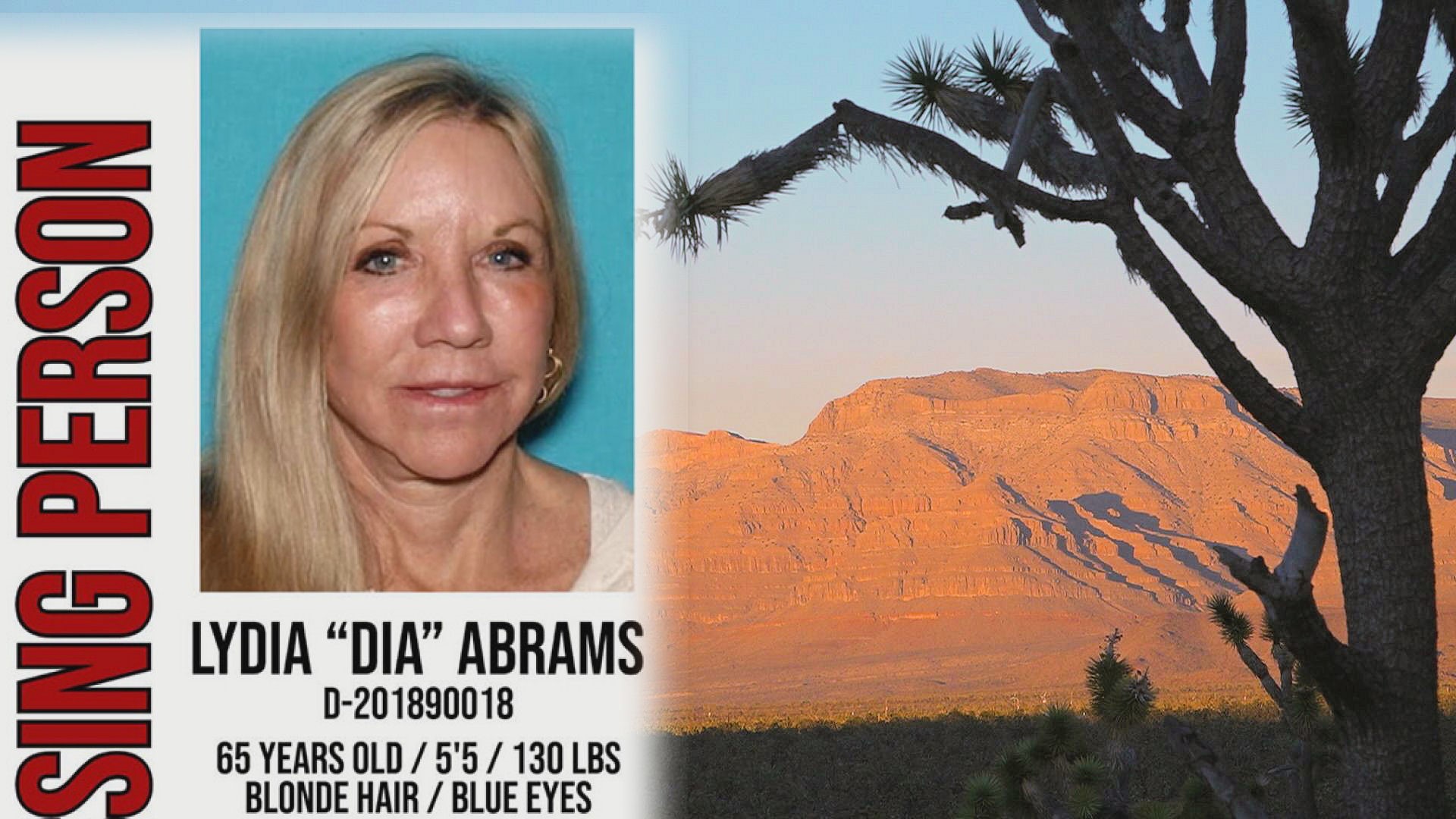 MEADVIEW, Ariz. — The search for a missing woman, Lydia “Dia” Abrams, has stretched to Arizona.  She was last seen eight months ago on her ranch near Idyllwild. In January, News 8 spent two days in the Grand Wash Cliffs wilderness near Meadview, Arizona searching for any trace of the former La Jolla millionaire.

Meadview is a retirement community with a population of about 1,200 residents.  The high-desert town rests in the shadow of the stunning, 2,000-foot Grand Wash Cliffs.

Abrams, 65, was last seen on June 6 by her boyfriend, Keith Harper, at her 117-acre Bonita Vista Ranch in Mountain Center, eleven miles east of Idyllwild.

News 8 was accompanied by drone pilot, Steve Jensen, to conduct a search; acting on information that Abrams’ body may have been dumped in the Grand Wash Cliffs area. The search area was roughly 20 square miles of rugged BLM land.

We rode off-road motorcycles eight miles into remote, Joshua Tree wilderness to the edge of the Grand Wash Cliffs. Jensen launched his drone to scour the face of the drop off, looking for the remains of Abrams.

The search team was trying to spot clothing that Abrams may have been wearing or, even more difficult, the decayed remains of her body.

After hours of searching, the team moved on to other locations on the plateau above the cliffs, where a body might be found.

Harper owns about 85 acres of land in the area, according to real estate records, and some of the parcels fall right along the cliff’s edge.

“I have no reason to bring harm to her. I loved that woman,” Harper said during the August interview.

Harper lived on the Bonita Vista Ranch with Abrams and said they were planning on getting married.

Two days after Abrams went missing, however, Harper drove his RV from the ranch in California, through Arizona and ended up in Aztec, New Mexico. Once there, San Juan County Sheriff deputies, armed with a search warrant, impounded the RV and took a section of the front driver’s seat as evidence.

Harper previously told News 8 that detectives had served a search warrant on Abrams’ ranch.  “We've had our cell phones, our computers, they were all taken,” said Harper in August.

Court records show Harper has a criminal history out of Colorado, including a domestic violence assault conviction stemming from a 2000 incident.

Originally charged with felonies of sexual assault and kidnapping, Harper eventually pleaded guilty to a misdemeanor assault count after the domestic violence victim refused to testify against him, according to court records.

In another criminal case, a jury found Harper guilty of groping two woman on a snowmobile tour in 2011.  The judge ordered him to register as a sex offender.

In 2014, a federal judge sentenced Harper to four months in custody for violating probation by illegally operating all-terrain vehicle tours on U.S. Forest land in 2012 and 2013.  He was allowed to serve his time in the La Plata County Jail in Colorado, according federal court sentencing minutes.

All the convictions in the cases cited above ended up being misdemeanors.

During his August interview with News 8, Harper said Abrams “absolutely” knew about his criminal history.

Harper has taken over as trustee of Abram's ranch near Idyllwild in her absence.  And, he has power of attorney over her estate, under the terms of a trust that Abrams transferred her properties into two weeks before she went missing.

Harper publicly filed the power of attorney document in a lawsuit he brought in December in New Mexico against an Arizona boot company, where he was seeking a refund for boots purchased by Abrams days before she went missing.

During the dismissal hearing, Harper telephoned into the court and told Magistrate Judge Stacey Biel, “I am the trustee of her estate. I am the power of attorney… It takes five years to pass before she’s either legally declared dead, or she was to return.”

“I am just trying to clear up some financial issues. I have taken over her whole finances, which have cost thousands in the process,” Harper said during the February 15 court hearing.

Harper also referenced a handful of other missing persons cases in the Idyllwild area while speaking during the New Mexico civil court hearing.

“Because of the incidents of the other five people that disappeared in five weeks, I do not think that I will see my fiancée ever again.  I think some dark side destroyed her,” Harper told the judge.

The Riverside County Sheriff’s Department, which is investigating Abrams’ disappearance as a missing person case, has not publicly named Harper – or anyone else – as a suspect or person of interest.

Riverside Sheriff’s spokesperson, Sgt. Deanna Pecoraro, said she did not have any update on the case as of February 16.

Keith Harper did not respond to multiple messages from News 8 seeking comment for this report.

We spent two days searching the plateau above the Grand Wash Cliffs, looking for loose dirt, clothing or human bones along miles of high-desert roads and in dry creek beds.