The conspiracy began in at least 2010 and continued through October 2018 to "fraudulently obtain hundreds of thousands of dollars" according to court documents. 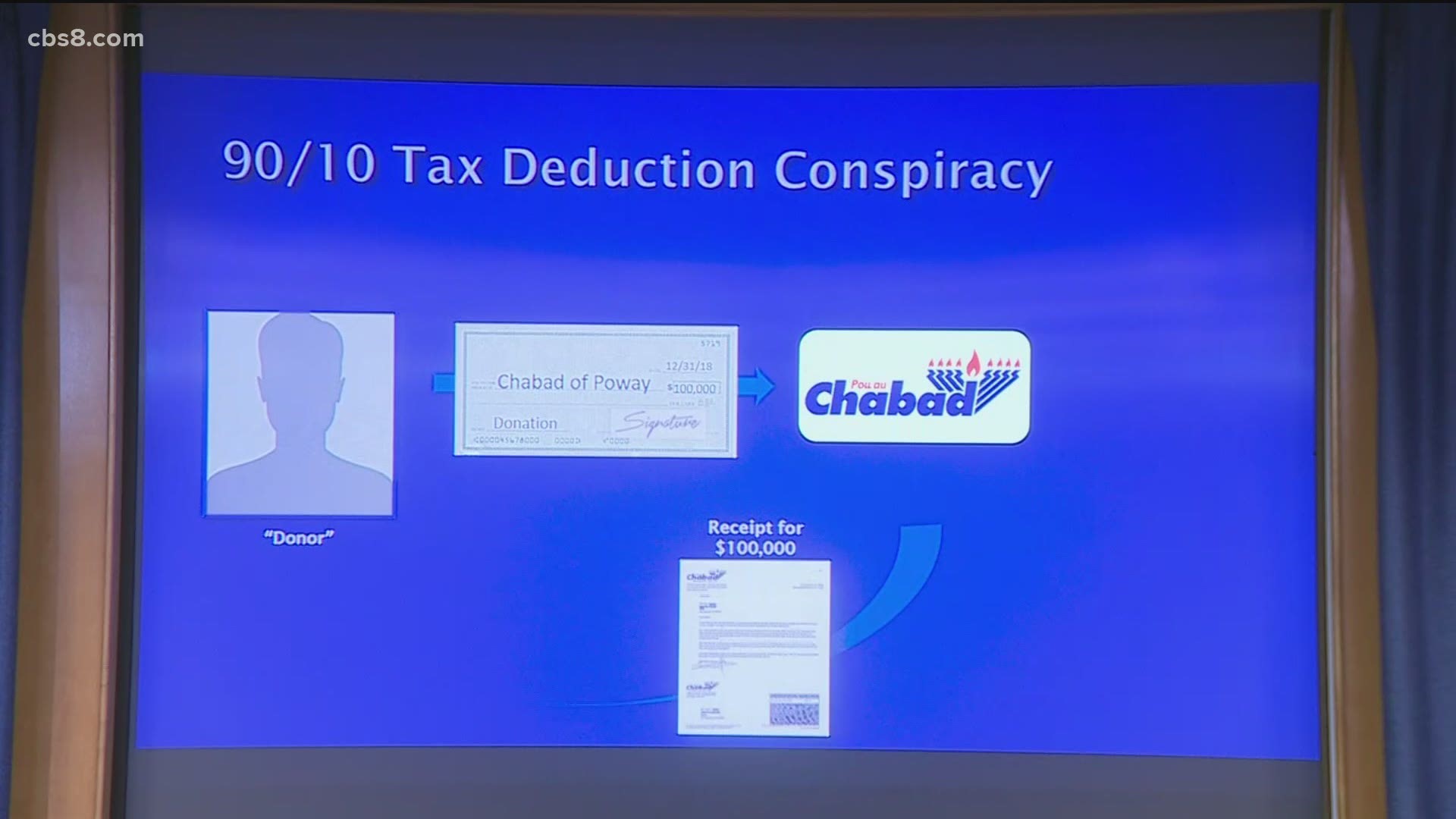 POWAY, Calif. — Rabbi Yisroel Goldstein, who was shot and lost his right index finger during the Poway shooting attack in 2019, pleaded guilty to federal charges of tax fraud and wire fraud Tuesday, according to the U.S. Attorney's Office. Goldstein signed a guilty plea on July 6.

According to court documents obtained by News 8, "some of the non-profit entities [the] defendent established provided services to the community, but others were non-functioning shell entities that existed primarily on paper or simply as bank account holders. Defendant used bank accounts held by these entities to conceal his illegal financial transactions and avoid detection by other Chabad officials, from the IRS, and from law enforcement."

U.S. Attorney Robert Brewer said Goldstein's plea came with admissions that he accepted the "charitable donations," then would send about 90% of the funds back to the donors, while pocketing the remainder for himself.

Donors would then falsely claim on tax forms that 100% of their donations went to Chabad, Brewer said.

According to the court documents, the conspiracy began in at least early 2010 and continued through October 2018 to "fraudulently obtain hundreds of thousands of dollars for the co-conspirators' personal use and benefit by using false information and fabricated records to pretend to be eligible for tax deductions."

Five co-defendants involved in the scheme pleaded guilty this week, according to Brewer, who said other alleged co-conspirators remain under investigation.

Over the years, Goldstein accepted at least $6.2 million in purported donations on behalf of at least 18 taxpayers, according to the U.S. Attorney's Office.

Goldstein also defrauded corporations that donated to Chabad or charities controlled by the rabbi, federal prosecutors said. Corporate employees taking part in matching donation programs would give Goldstein money, which he secretly funneled back to them, while keeping the matching donation amounts provided by the corporations, according to Brewer, who said at least six employee co-conspirators took part in that scheme from 2010 to 2018.

Another scheme involved submitting fraudulent invoices to the Federal Emergency Management Agency, California Office of Emergency Services and other entities in order to obtain grant funding.

Brewer said on one occasion, fake invoices were created on behalf of a fictitious construction company, in order to complete repair work on properties supposedly damaged by the 2007 San Diego wildfires. However, Brewer said the damage was entirely fictional.

Other grants received by Goldstein were purportedly to go toward improvements or repairs to Chabad, but were instead kept for personal use, according to the criminal complaint.

"Sadly, the facts of this case show a willful effort to deceive on the part of a trusted community leader," Brewer said.

The U.S. Attorney said Goldstein has cooperated with authorities, leading to his co-defendants' guilty pleas, and will cooperate in the ongoing investigation into as-yet uncharged individuals.

Brewer said the U.S. Attorney's Office will recommend probation at Goldstein's sentencing, though the punishment ultimately rests with a judge. Goldstein has also agreed to pay $2.5 million in restitution.

Rabbi Goldstein gained attention recognition after surviving the attack. He previously addressed the United Nations General Assembly on anti-Semitism, roughly two months after a deadly shooting at the synagogue. Goldstein visited the U.N. General Assembly in New York City as a guest of Danny Danon, Israel's ambassador to the U.N. The address called on countries around the world to collaborate to mitigate anti-Semitism and hate speech in general.

Lori Kaye was killed at the synagogue last year. Kaye died on April 27, 2019, after being shot in the Chabad by a gunman who also injured three others. Her husband was there at the time and unknowingly tried to help his wife before he discovered it was her. Kaye's death was mourned not only by the Chabad of Poway, community but the entire area.

"There is no doubt that Rabbi Goldstein was the victim of a horrific hate crime that terrorized him and the worshippers at the Chabad in April of 2019. That event was a significant, mitigating factor to the plea agreement, but it is no excuse," Brewer said.

"We cannot look the other way because a perpetrator of a crime becomes, suddenly, a victim of crime," he said. "We commend Mr. Goldstein in his community leadership after the shooting, as well as his cooperation once this investigation came to light. But the illegal conduct had occurred for many years and it cannot be ignored."

"Yet, we've since learned that Rabbi Goldstein violated the law, contradicted what our synagogue stands for, and transgressed the very moral and ethical rules of the Torah he taught."

Upon learning of the allegations "some months ago," the synagogue conducted an "internal review," after which Goldstein was removed from his duties at the Chabad.

"We hope and pray that Rabbi Goldstein finds the professional help that he needs and makes amends to our country and to the people he has hurt. And we pray that the Goldstein family find the healing they so deserve."

Longtime Poway resident Carol Lord, who lives next to the synagogue but is not a member of the Chabad of Poway, says these crimes takes away from the rabbi's message of unity and compassion he shared in the aftermath of the shooting.

"I am disappointed," she told News 8. "Everyone should be able to live their lives as they choose, but then to hear this happen...  it puts a whole damper on his message."

Chabad of Poway issued the following statement on Tuesday afternoon:

This is a very painful time for our congregation. Following the attack on our synagogue last year, when we were frozen with shock and fear, Rabbi Yisroel Goldstein brought us together and inspired our community. That was the Rabbi Goldstein we knew. That was the Rabbi Goldstein the world came to know.Yet, we’ve since learned that Rabbi Goldstein violated the law, contradicted what our synagogue stands for, and transgressed the very moral and ethical rules of the Torah he taught.Upon learning of these allegations some months ago, we launched an internal review, following which the rabbi was removed from all of his duties at Chabad of Poway, his relationship with the organization terminated, and he was dismissed by Chabad-Lubavitch Headquarters as a representative of the movement. (We were unable to disclose this at the time so as not to interfere with the U.S. Attorney’s investigation.) Throughout, we have cooperated with law enforcement, who have treated our congregation with respect, dignity and grace.How do we reconcile this heartbreaking reality with the good Rabbi Goldstein accomplished during his decades of service? How do we separate his unethical and unlawful behavior from his many positive contributions to our community? We will surely struggle with these questions for a long time to come.Despite these challenges, we are resolved to move forward together and to distinguish between Rabbi Goldstein’s own misdeeds and the timeless ethical and moral Torah teachings he helped connect us to. We will continue to serve G‑d with joy, to heal and grow stronger, to share acts of goodness and kindness, and to ensure that Chabad of Poway renews its role as a beacon of light and source of inspiration for the greater Poway community and beyond. We hope and pray that Rabbi Goldstein finds the professional help that he needs and makes amends to our country and to the people he has hurt. And we pray that the Goldstein family find the healing they so deserve.We request that during the coming days and weeks our community and the Goldstein family please be given the respect, privacy and space they need. Any questions relating to the investigation should be directed to the U.S. Attorney’s Office.