The mayor said the order is effective immediately and allows restaurants to operate sidewalk cafes and use parking lots for outdoor dining. 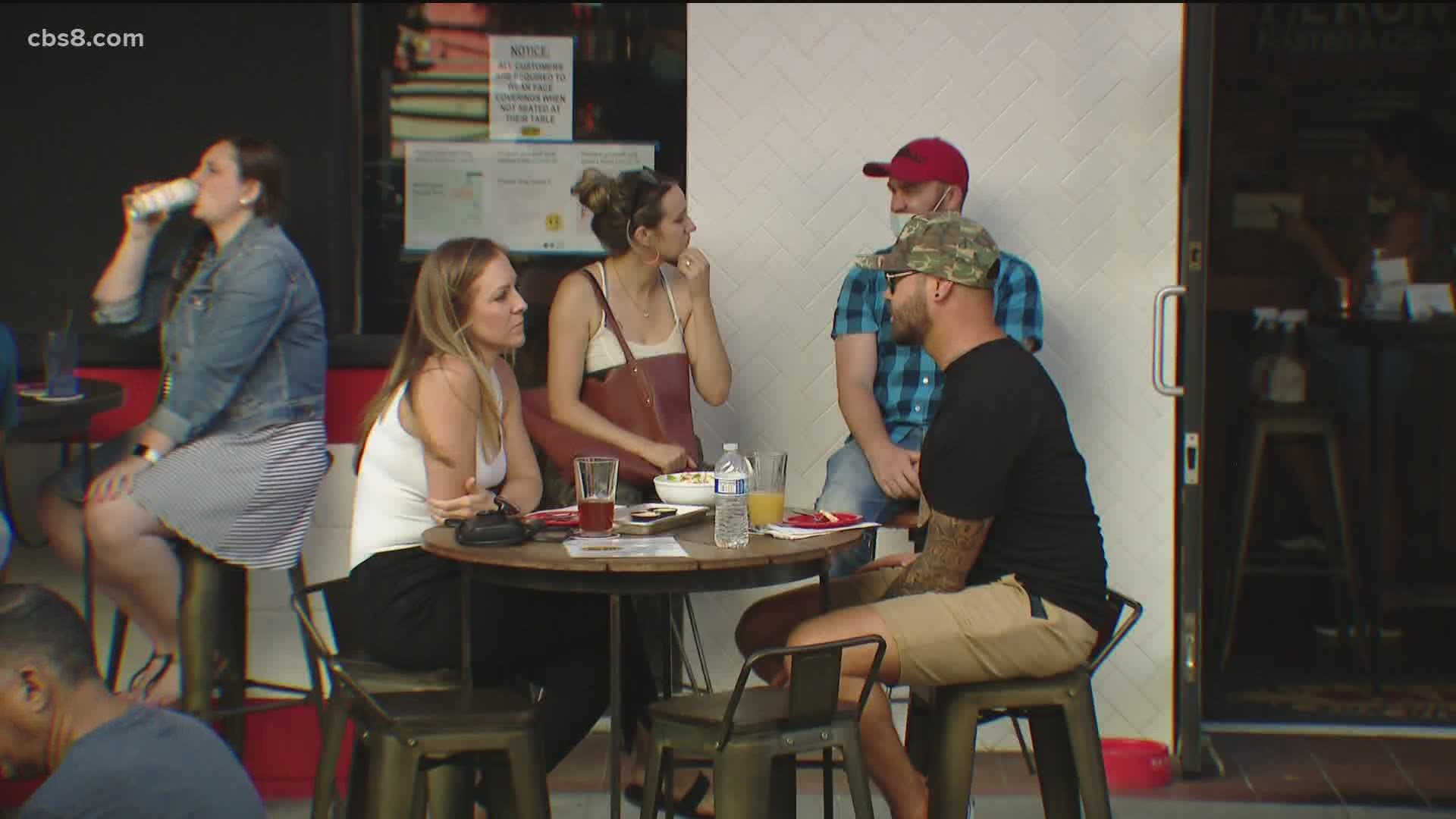 The mayor’s order waives permitting and parking requirements for the use of sidewalks and private parking lots as outdoor dining venues - and is effective immediately, he said. Enforcement of municipal codes that would typically prohibit such operations will be suspended.

"This [executive order] is important to preserve people's jobs and to preserve public safety," he said. "Public health experts have been clear. Two key tools to help slow the spread of the virus are open-air environments and physical distance."

Faulconer said securing the necessary permitting to expand outdoors in this way can take months and costs businesses more than $1,000 in typical times.

The mayor announced the order at a media briefing where he was joined by Elyse Lowe, development services director for the City of San Diego and Matt Spencer, a local business owner representing the California Restaurant Association for the announcement.

Lowe noted that the order does not make businesses exempt from ADA requirements, live music ordinances and other rules that exist.

In addition to announcing the executive order, Mayor Faulconer reminded residents of their individual responsibilities to help curb the spread of COVID-19.

The San Diego City Council is expected to consider a proposed ordinance next week that will expand on Faulconer's order. If approved, the ordinance will reduce permit fees, waive and streamline permit reviews, allow for outdoor dining plazas and outdoor operations in on-street parking areas, Faulconer said.

Indoor dining will be closed for at least the next three weeks after the county remained on the state's monitoring list for three consecutive days, leading all indoor operations to be halted at a variety of businesses, including restaurants, where county health officials say many of the recent outbreaks occurred.

Outdoor/patio dining is still permitted until 10 p.m., but patrons must leave the premises by 11 p.m. Pickup, delivery and drive-thru can remain open.

In a statement announcing the executive order, Faulconer said, "Given that the state's new shutdown order has an immediate impact on local businesses, this action will provide relief while the city is finalizing a new ordinance for council approval that will cut fees and streamline permits to make it easier for businesses to operate outdoors."

Also on Tuesday, distribution of $17 million from the federal Coronavirus aid bill as part of a small business stimulus program was unanimously approved by the San Diego County Board of Supervisors.

The five supervisors will allocate the funding to help businesses impacted by the coronavirus in their districts.

The board tentatively approved distribution of the funds May 19, but asked county staff to report back in 45 days with recommendations on implementing the economic stimulus program.

Supervisors Nathan Fletcher and Dianne Jacob co-authored the original proposal. Fletcher suggested applications should be in several languages, including Spanish, Chinese and Vietnamese.

Jacob expressed concern about the cost of translating applications or whether they would slow the application process.

"We want to make sure we're serving everybody,'' Jacob said. ``I want to get the applications ready. We need to get this money out the door or lose it.''

The deadline for applications was not provided.

Printing applications in other languages would cost $11,000 and create a three-week lag time, according to Chief Administrative Officer Helen Robbins-Meyer.

Fletcher said making county information available in other language iisn't out of the ordinary, and that if an applicant doesn't speak English ``they're not going to ask for help.''

Supervisors heard from supporters of the program before the vote. Iris Garcia, president of the San Diego County Hispanic Chamber of Commerce said it wants ``to see county recover in an equitable framework,'' by focusing on minority owned businesses.

RELATED: How risky is dining out during the COVID-19 pandemic?