The district is also dealing with fallout from statements board member Charda Bell-Fontenot made last month. 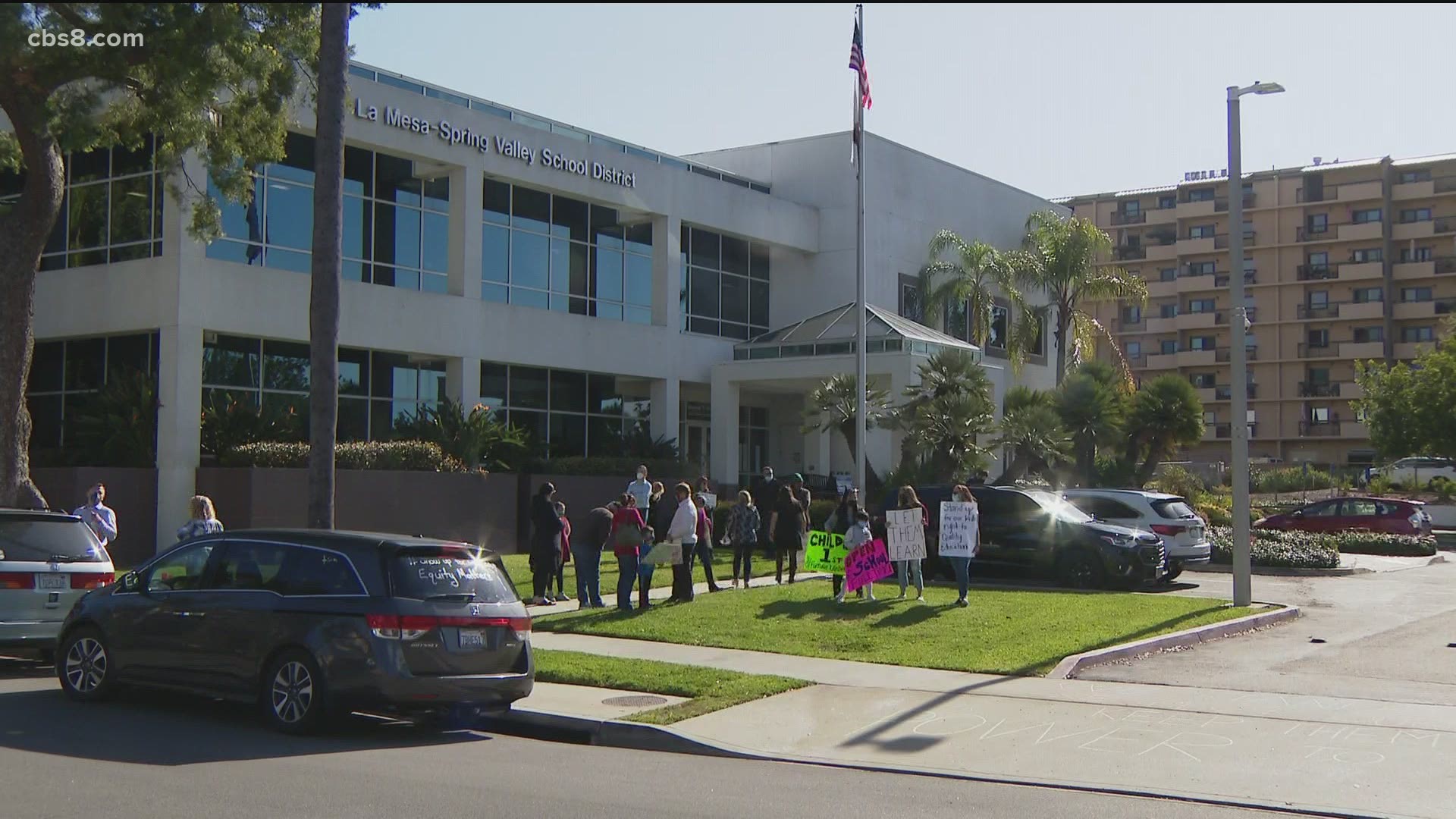 LA MESA, Calif. — La Mesa-Spring Valley schools are still closed and the quest to reopen them continues. On Tuesday, protesters on both sides of the debate rallied just before a district board meeting. The board is also embroiled in controversy after one of its members made statements about slavery in last month’s meeting.

The rally was peaceful but that doesn’t mean people weren’t passionate about whether or not to reopen schools and the current state of the school board.

Dozens of people showed up to show their support on both sides of the issue: when to reopen La Mesa-Spring Valley Schools for full-time, in-person learning. One parent said schools need to reopen because the children are suffering.

“It’s because of the horror stories that I’m hearing from other moms and dads about our kids. I’m hearing stories of kids who are really struggling with severe anxiety, severe depression,” said Amy Reichert.

Others at the rally opposing reopening schools say they don’t feel comfortable or safe, even as San Diego County moves into the red tier.

“I feel like staff members here in the school district should have a voice on when they feel it is comfortable and appropriate for each of them to return to school,” said Robert Weaver whose wife is a teacher in the district and opposes schools reopening too soon during the pandemic.

He said they also have a child with a compromised immune system.

The district is also dealing with the fallout from statements Board member Charda Bell-Fontenot made last month:

“I know what we are doing is wrong. That seems like a very white supremacy ideology to conform...privilege you guys....check it……I'm not gonna force anyone to do what they don't wanna do. That's what slavery is. I'm not gonna be a part of it,” Bell-Fontenot said.

Some people were outraged by Bell-Fontenot’s statements and at Tuesday’s online board meeting, recorded messages were played aloud for the board.

“The unprofessional comments made by VP Charda Bell-Fontenot along with the nature by which they were delivered was completely reprehensible and should not be tolerated,” said one parent, who didn't announce her name.

Bell-Fontenot wasn’t in the meeting when the comments were read aloud but she did have supporters at the rally.

“I can see where board member Bell-Fontenot was coming from when she says that looks an awful lot like slavery. She wasn’t saying that it was slavery, but it was racially insensitive, culturally insensitive. I feel like her concerns that she brought up were very justified,” Weaver said.

Bell-Fontenot has hired a lawyer and continues to stand by her comments. As for reopening, the decision on when to reopen has not been made.

Watch: La Mesa school board member under fire for comments made at meeting