At one point, the La Mesa Chief of Police Walt Vasquez and other officers were seen hugging and shaking hands with some of the protesters. 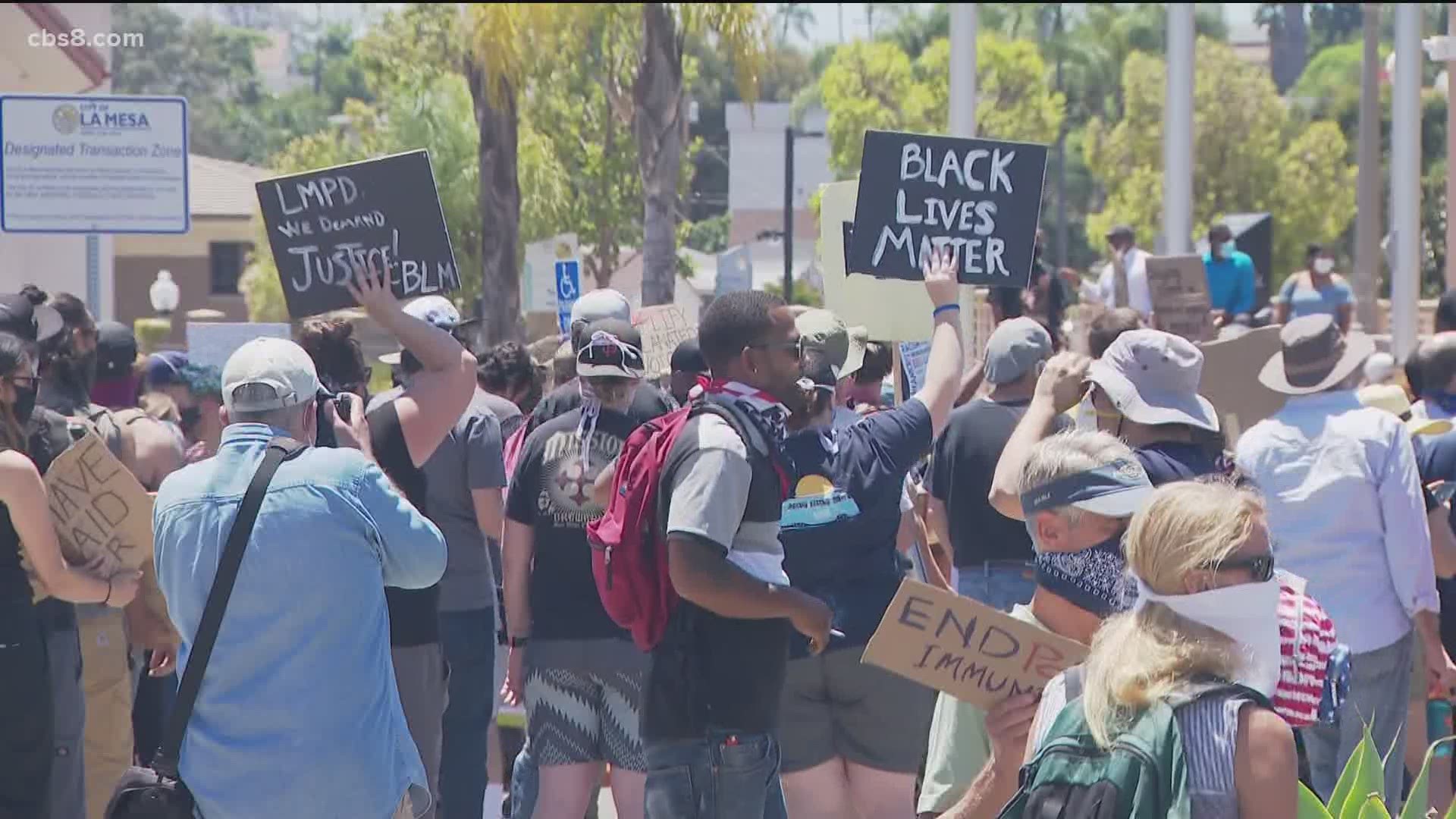 LA MESA, Calif. — A protest against police use of excessive force against people of color got underway Sunday afternoon in La Mesa, where the same sort of demonstration two weekends ago was followed by destructive anarchy.

The protesters grew in number reaching about 350 at one point, according to city officials. Just before 4:30 p.m., the City of La Mesa reported the protest had ended and thanked everyone involved for helping to make it a safe and peaceful event.

Prior to the event, a motorcycle gathering and Unity Ride began in Oak Park and ended at LMPD headquarters to join the protest.

Organizers said they intended the event to be a non-violent call for change in law enforcement and official accountability for several widely condemned police encounters that played out recently in the eastern San Diego County city. The protest got started at 1 p.m. outside the La Mesa Police Department headquarters on University Avenue.

La Mesa police took a noticeably different approach to this protest compared to the one on May 30. Uniformed officers were in front of the station without riot gear. At one point, the La Mesa Chief of Police Walt Vasquez and other officers were seen hugging and shaking hands with some of the protesters.

Among the demands being voiced by participants during the rally at La Mesa police headquarters are the firing of two LMPD officers -- one involved in the allegedly abusive May 27 arrest of Amaurie Johnson near Grossmont Transit Center, the other in the serious injuring by a police projectile of a 59-year-old woman taking part in the protest three days later.

It was during the May 30 protest, that Leslie Furcron was seriously injured with a projectile. She has since been released from the hospital and has spoken out about her ordeal and ongoing recovery.

While officers and the chief acknowledged the frustration of protesters, they said they will not discipline the officers until an independent investigation is complete. Vasquez said he expects a report from independent investigators will be completed in early July and then he will be able to review it and take whatever action he thinks is necessary.

"At that point, the investigation is back in my hands and then I'll have to make some decisions and rendering some decisions after I review it. So I understand, but it is a process and it's due process," Vasquez said.

As the afternoon protest continued, about 200 protesters gathered in a circle around multiple speakers in the parking lot in front of police headquarters. Some in the audience carried signs such as "Defund the Police" and Black Lives Matter flags. Some of the bikers stayed seated on their motorcycles. Many in attendance wore face coverings. The group applauded and cheered as a microphone was passed between speakers.

Just before 4 p.m., city officials said the event seemed to be ending with about 40 people remaining.

"We are Peaceful!," organizer Tasha Williamson posted on Twitter prior to the event. "We are Unified! We Want JUSTICE!"

The May 30 demonstration began in an orderly fashion but was followed by burglary, looting and arson fires that destroyed several commercial buildings, including two banks.

Regarding Sunday's protest, La Mesa police were "making every effort to reach out to the event organizer for further information to ensure we have appropriate resources on hand to facilitate a safe and peaceful exercise of the group's First Amendment rights," LMPD spokesman Lt. Greg Runge told the Times of San Diego on Thursday.

RELATED: Recent La Mesa police controversies bring up issues from past excessive use of force issues

RELATED: La Mesa woman shot in head with bean bag round at protest speaks out