Teenager shot in face in College Area amid weekend of large, disruptive parties investigated by SDSU

30-40 people allegedly fought at one party and the 16-year-old was shot while leaving. This comes as thousands of students move in and around the SDSU campus. 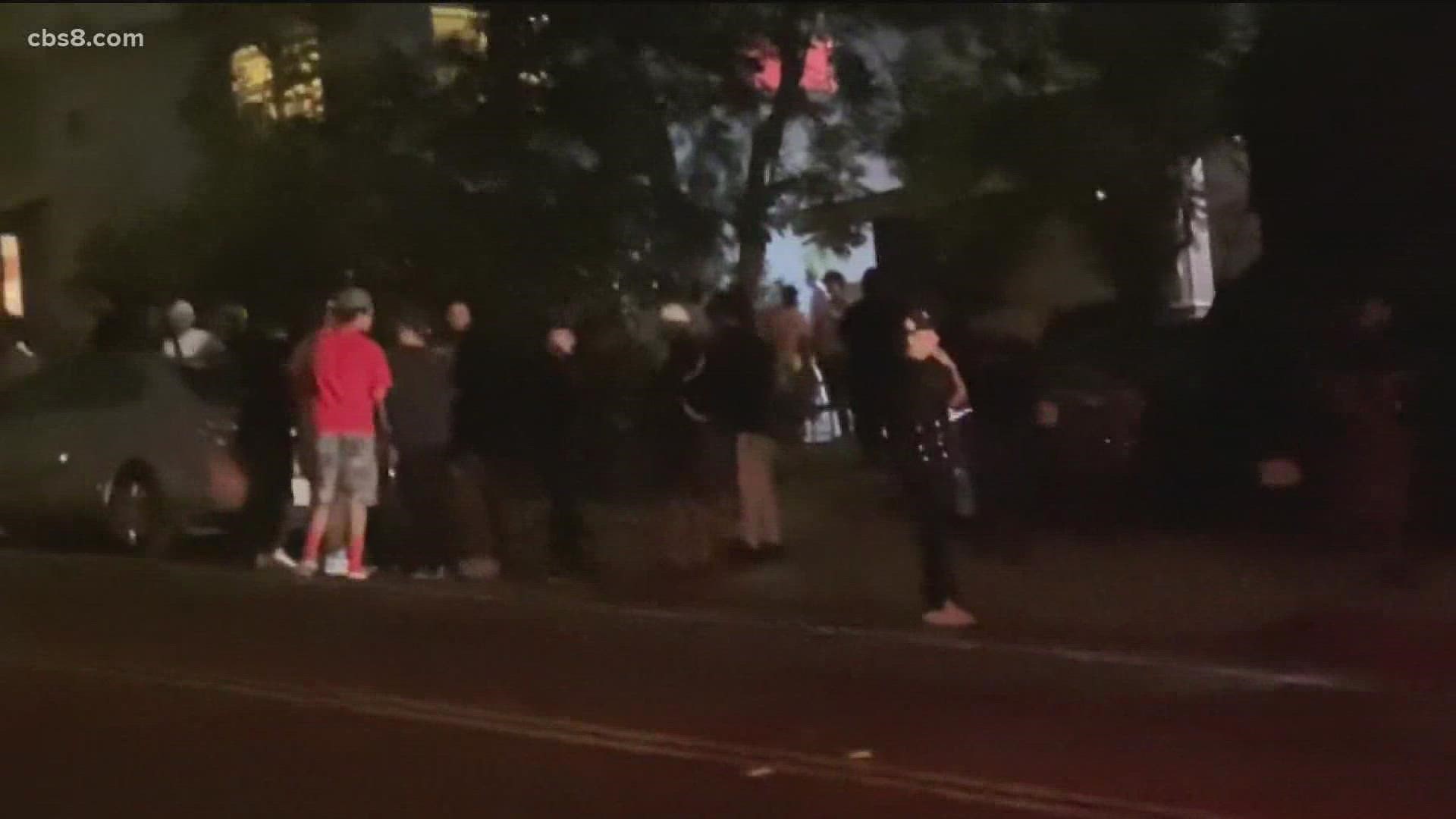 SAN DIEGO — A 16-year-old is recovering at home from a gunshot wound to the face following a reportedly massive party in the San Diego State College area.

The incident happened just before Midnight on Saturday night.

According to San Diego Police, 30 to 40 people were in a large group fight near the 5900 block of Baja Drive, just south of SDSU's campus. Police told News 8 a suspect has not been identified. The injured teen was treated at a local hospital and has been released according to his mother but has a long tough recovery ahead of him.

It's unknown how many injuries happened from the brawl.

Both SDSU and police say the victim of the shooting is not related to the school, but the university is taking action to try and squelch the large increase of parties this weekend as students move in.

"Honestly our neighborhood looked like a warzone last night," said Susan Hopps, a neighbor who witnesses the incident in the College area.

"Somebody's going to get hurt, something is going to happen and we need a response," Hopps said. "I was waiting for police to come by but instead I saw students running around saying somebody's been shot."

The violent party is just one of many large gatherings that have swept the College area off its feet this weekend.

SDSU told News 8 it is filing multiple cease and desist orders with houses that allegedly hosted parties over the weekend, but would not specify the number of houses it's targeting.

"We will also begin the conduct process in all situations where our student code of conduct policy allows for us to do so," SDSU officials wrote in an email.

SDSU also told News 8 that the shooting off Baja Drive is not related to the university, and not connected to the party complaints warranting cease and desist orders.

Hopps said the large party was the only one happening on her block but said students grew rowdy after the shooting.

The surge in parties is largely due to thousands of students returning to campus after 18 months of a global pandemic that dismantled normal, in-person student life.

This fall semester is the first time the majority of students are back to living in residential housing for the first time since the pandemic started.

Last year, SDSU and the surrounding areas were overrun by a "plague of parties," as University President Adela de la Torre said during a press conference last year.

SDSU ended up reporting more cases of coronavirus than any other four-year college in the state of California for the fall semester. One student was even hospitalized during the peak of the outbreak.

The Interfraternity Council, the largest fraternal organization on campus, is also back to hosting in-person social events.

According to a letter dated August 18, IFC President, RJ Hullum announced that he and fellow officers voted to repeal a self-imposed party ban instituted back in August 2020.

Though this party ban was violated multiple times by IFC chapters, the revocation of the ban means that rush activities will be back to a higher volume of in-person attendance.

While the school community is opening up more, it recently reported a 94% vaccination rate among its student population. This is a key factor in fighting the COVID-19 pandemic.

But with the Delta variant on the rise, and off-campus parties attracting non-SDSU community members, some students are concerned with SDSU's approach.

"I am very hesitant to say we will be in person for the entire year, just because I think SDSU has the potential, with how it's handling COVID, to get high case numbers," said Allison Sandoz, a fourth-year accounting major.

Sandoz also served as a residential housing employee for two years and says she does not have faith in the school or students to take the remainder of the pandemic seriously.

"I'm very scared for this school year because if the students keep acting like the pandemic is over then soon enough we're going to see what we saw last year when cases were rising and people having to be isolated, especially with classes being in person... it's just a COVID crockpot on campus," Sandoz said.

Currently, SDSU is reporting zero cases of coronavirus after this week's move-in.

Students, regardless of vaccination status, had to test before moving into campus.

According to SDSU's campus protocol, fully vaccinated students do not need to conduct regular testing but those who are not must test regularly.

Another way the university is working to prevent events like this weekend's large and violent parties, comes from recommendations made in the wake of the late freshman Dylan Hernandez.

Hernandez was a pledge for the now expelled fraternity chapter of Phi Gamma Delta. He died from a head injury the night after a fraternity event where he drank alcohol and was allegedly hazed.

One of the fully implemented recommendations is expanding Aztec Nights, an on-campus event for students to socialize in an administrator-supervised setting.

Aztec Nights used to only run for the first five weeks of the fall semester but will now last throughout the entire semester.

"All SDSU sponsored and hosted events adhere to California Department of Public Health as well as San Diego County COVID-19 guidance," SDSU wrote in an email.

Concerned students like Sandoz say SDSU has room for improvement.

"I think at the bare minimum they should still have everyone on a testing schedule," Sandoz said, inferring that even fully vaccinated students should be taking mandatory COVID tests.

She also advocated for increased mental health resources as the institution reopens. "It may have a worse effect on students if we have to return back to virtual," she said.

Vice President of Student Affairs and Campus Diversity Dr. Luke Wood has spearheaded improvements for communication between SDSU and its College area neighbors.

Hopps said that she and multiple College area residents met with Dr. Wood Sunday morning after the teenager was shot. Dr. Wood did not respond to the request for comment.

The official first day of classes for SDSU is Monday, August 23.

WATCH: Neighbors say SDSU off-campus parties out of control during the pandemic: