News 8 looks into the history of Barrio Logan, and what it's like today. We revisit Chicano Park and look at the vibrant arts scene and small businesses. 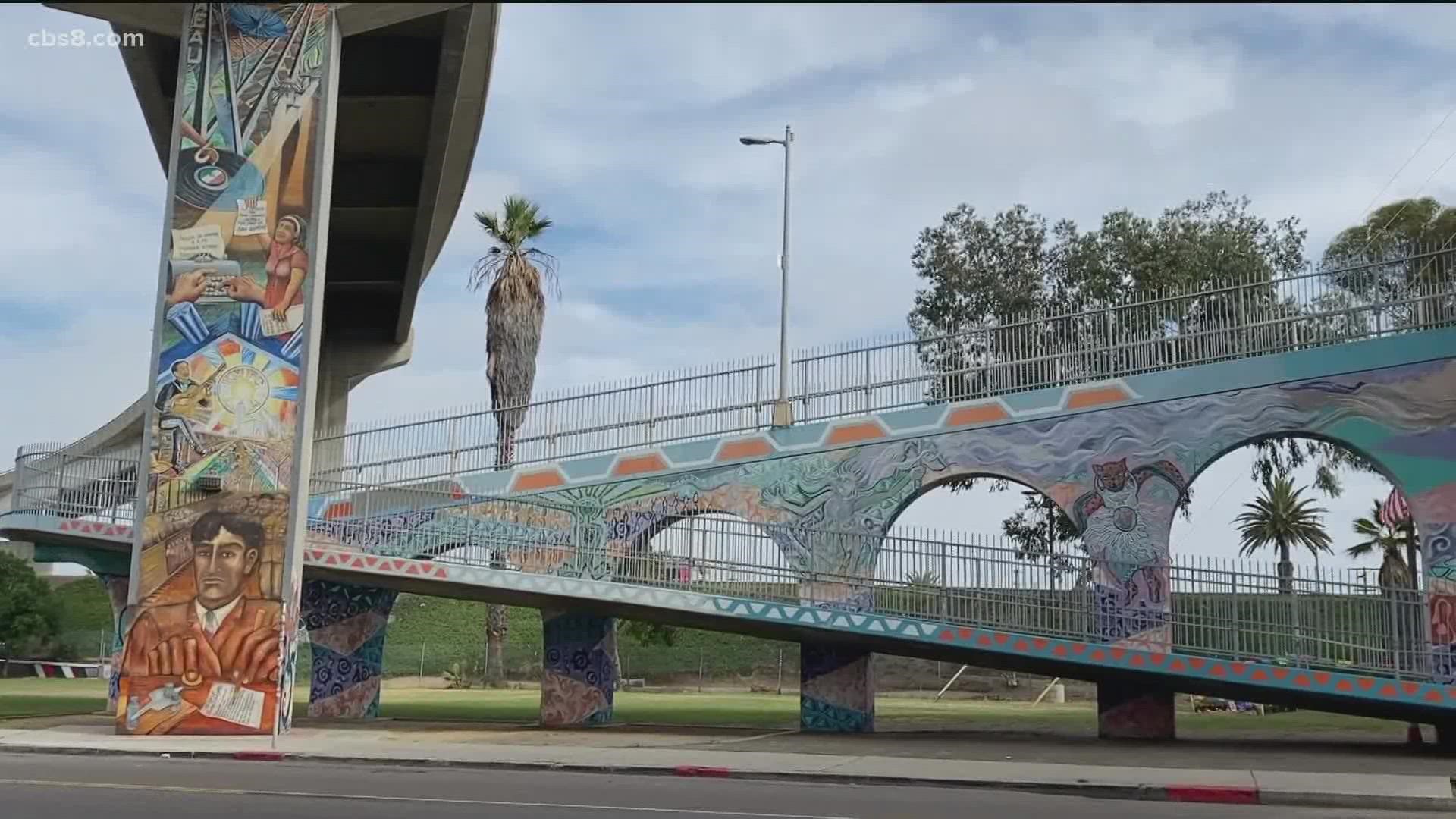 SAN DIEGO COUNTY, Calif. — When you think of Barrio Logan the first place that comes to mind may be Chicano Park where every mural tells a story of a struggle or success - and even to get the park here wasn’t easy. Many businesses are also fighting to stay afloat but just as importantly, they’re fighting to preserve their rich culture.

That rich culture is evident through the bold, bright murals. About 60 of them were created by muralist Victor Ochoa Orozco.

"If it wasn’t for Chicano Park we would have Taco Bells all over the place and parking lots and it would disappear really easily," he said.

Which is why back in April 1970, Victor was one of hundreds of protesters who fought to save the park.

"When I got here, there was mainly mothers and kids doing human chains around the bulldozers," he recalled.

They were trying to stop a CHP office from being built.

"I pulled my sleeping bag out of my car," Victor said. "I was here for a couple weeks."

He referred to himself as a Chicano hippie then. Now, a well-known muralist turned somewhat of a historian, Victor continues to fight for his community.

"One of the things about Chicano Park is that nothing has been without a struggle,"  he said.

He recalled when Interstate 5 and the bridge were built saying they cut off Logan Heights from the Barrio.

"We had junkyards. They sold poisonous containers across the street. All this crappy stuff. Big trucks, crunching cars next to peoples' houses," Victor said. "It was terrible on this side."

The Barrio extends just south of the downtown convention center to Naval Base San Diego and includes everything west of I-5 to the water.

While it's still somewhat industrial and lined with poverty, nowadays it’s being recognized as a place for expression through its arts district.

Beyond the nearly 100 murals of Chicano Park, you don’t have to go far to find creative designs, just go to Sew Loka on Logan Avenue.

Sustainable fashion that makes a statement with pride in her culture, front and center.

And just down the street, the first Latino-owned brewery in San Diego where the CEO of Border X puts Mexican heritage on display through art and Latin-inspired beer.

"We think Barrio blessed us with giving us the historical perspective - the Chicano perspective," said David Favela.

Some of the people who live here go two to three generations deep. Living in what was considered the poor part of town, hardworking Mexican parents making pennies, dealing with language barriers, and discrimination. All the while, many storefronts were boarded up for years.

"It's been a grassroots rebirth by artists vendors," David said.

Now those artists highlight the challenges of migrant families by showing the beauty of resiliency.

"We call that gentefication - a more person-based, humane way of developing our neighborhood," said David. "That’s the first rule - it's gotta celebrate the history."

Our Lady of Guadalupe church featured by CBS 8 in 1986, hasn't changed much in 35 years, but the cityscape beyond it looks quite different in 2021.

And there's no better place to celebrate history than Las Cuatro Milpas. Going strong since 1933, you’d rarely see this place without a long line.

"I used to live in the back," said Nadia Estudillo. "I basically grew up on this property."

"This is one of Barrio Logan's statement restaurants," said Nadia. "The mayor comes in all the time. Police officers, lawyers; people you wouldn’t expect - high in power in the city - they're always in here."

"Just last weekend there was a guy who came from Alaska just for a dozen tortillas," she added.

And the regulars say they appreciate the simple menu, low prices, and recipes that have remained untouched.

From the old to the brand new on National Avenue - the recently dubbed “Acre of Awesome” is bringing its own flavor to the neighborhood.

Kove Yerba Mate opened up during the pandemic bringing hard tea to the market. They ferment their tea at Thorn Brewing next door.

And have a decorated outdoor tasting room in what was Thorn’s loading zone.

"If you look around, it's all hand made by our friends and community helping us make it," said Alex Montelbano, CEO of Kove.

While much of what they're doing is new and unique, the owners of Kove know to be welcomed here, they must embrace the past.

Over at Mujeres Brew House, you could call co-owner Carmen Favela the queen of embracing her roots.

"This is Pan de Muerto beer so we use all the ingredients that the pastry has," she said.

"To see young entrepreneurs opening on Logan and trying to keep the culture is something that is absolutely beautiful and to be a part of that it's historic," she said.

Whether people eat and drink their way through town, are here for the low-rider culture, or come to soak in spectacular murals and absorb the deep messages within, they’re sure to gain insight on what hard work and determination can do.

It's that grit that turned a somewhat rundown community once taken over by junk yards into a sacred place that will captivate all the senses.

There is much more work to be done muralist Victor Ochoa Orozco said they would like to extend Chicano Park all the way to the bay as a way to strengthen the community even more.