San Diego’s beautiful scenery and practically perfect climate have made it an ideal backdrop for everything from feature films to TV series. 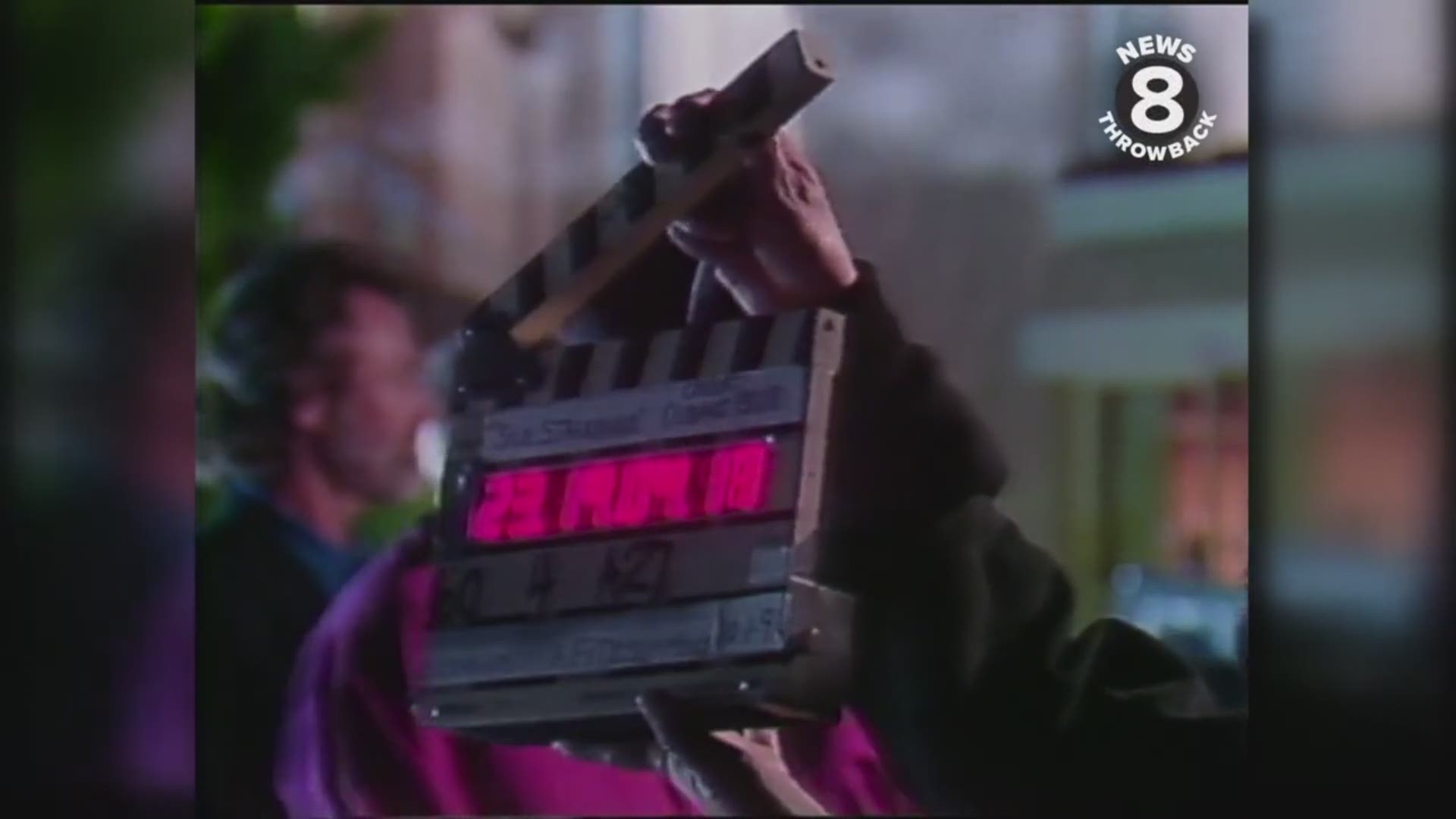 SAN DIEGO — America’s Finest City may not boast the bright lights of Hollywood, but we’ve been home to our fair share of movie and television productions over the years. San Diego’s beautiful scenery and practically perfect climate have made it an ideal backdrop for everything from feature films to TV series. Our archives boast some of our moments in the spotlight and interviews with the stars and crew who made them happen.

'Loving Couples' filming on location at Hotel del Coronado in 1979

In the late summer of 1979, the romantic comedy “Loving Couples” was being filmed in San Diego County and News 8 cameras were there to sneak a peek behind the scenes. Stars Shirley MacLaine and James Coburn were spotted on location at the Hotel del Coronado and one of the film’s producers Renee Valente had nothing but praise for the area from the beautiful locale to the accommodating people. And speaking of San Diegans, about 120 locals got to be extras in a scene being shot the day News 8’s Shirley Clum visited the set.

In 1980, News 8 ran a three-part series called “San Diego Goes to the Movies” all about television and movie production in America’s Finest City. In part one, reporter Doug McAllister goes way back in the history of film in California and to the location of one San Diego’s first motion picture studios, The American Film Manufacturing Company, which was located at Third Street and La Mesa Boulevard in the heart of what is now La Mesa Village. Also known as Flying A Studios, the company’s filmmaker Allan Dwan made over 150 movies in San Diego County – many in East County – which were mostly westerns. Doug also spoke to Dr. Ray Brandes – a USD history and archeology professor who became known as the preeminent historian of San Diego – about local movie-making history.

In the second installment of the series, News 8 skims through the 1930s - ‘60s which saw less Hollywood-type action in San Diego. But we do get a glimpse of Marilyn Monroe and Jack Lemmon filming “Some Like It Hot” at the Hotel del Coronado in 1958.  Mostly this portion looks at what was then contemporary movie and television making in San Diego. Doug visited the set of “Borderline” - an action crime drama which starred Charles Bronson and Ed Harris – and spoke to producer Jim Nelson about the ways the city and County of San Diego helped production run smoothly. There are also glimpses of production on films "In God We Trust" and "A Force of One" in San Diego. Former San Diego Mayor Roger Hedgecock can be seen as an extra in the latter.

For part three of the series, Doug focused on the economic impact of film and TV making in San Diego and how the Chamber of Commerce’s Motion Picture and Television Bureau worked to keep directors, producers and stars coming back. He also spoke about the future of the industry locally and how it could benefit locals without turning the area into another Hollywood.

Though set in San Diego, the CBS detective series “Simon & Simon” didn’t always film here. But when they did make the trip south of Hollywood in 1986 to film scenes for two episodes, News 8 was there to scope out the action, and lead actors Gerald McRaney and Jameson Parker, at the Santa Fe Depot downtown. In part one of two, reporter Lorraine Kimmel spoke to locals – one who studied acting and another who was a self-described “San Diego housewife” - who got to be extras on the shoot about the excitement and the funny outfits. In the second piece, during filming at Balboa Park, Lorraine got to ask one of the show’s stars Gerald McRaney himself what question he liked to be asked.

While movie and TV productions had come and gone in San Diego previously, in 1992, News 8 reported on a series that was here to stay. The CBS crime drama “Silk Stalkings,” which originally starred Rob Estes and Mitzi Kapture, was already planning a second season when News 8’s Bob Hansen visited the set. The show was produced by Stu Segall Productions which was also working on “Renegade” at the time. “Silk Stalkings” ended up staying on the air for a total of eight seasons, though they went through some casting changes along the way. Most of the episodes were filmed in San Diego – which stood in for the show’s setting of Palm Beach, Florida. “Renegade” lasted five seasons and starred Lorenzo Lamas as Harley-riding Reno Raines – a San Diego cop who goes on the run after he’s framed for a murder he didn’t commit. In that series, San Diego served as the proxy for a fictitious city called Bay City, California.