Timeline | The disappearance of Maya Millete

Maya was last seen on January 7. Since then, searches go on every weekend looking for her and law enforcement agencies are investigating. Here is what we know so far 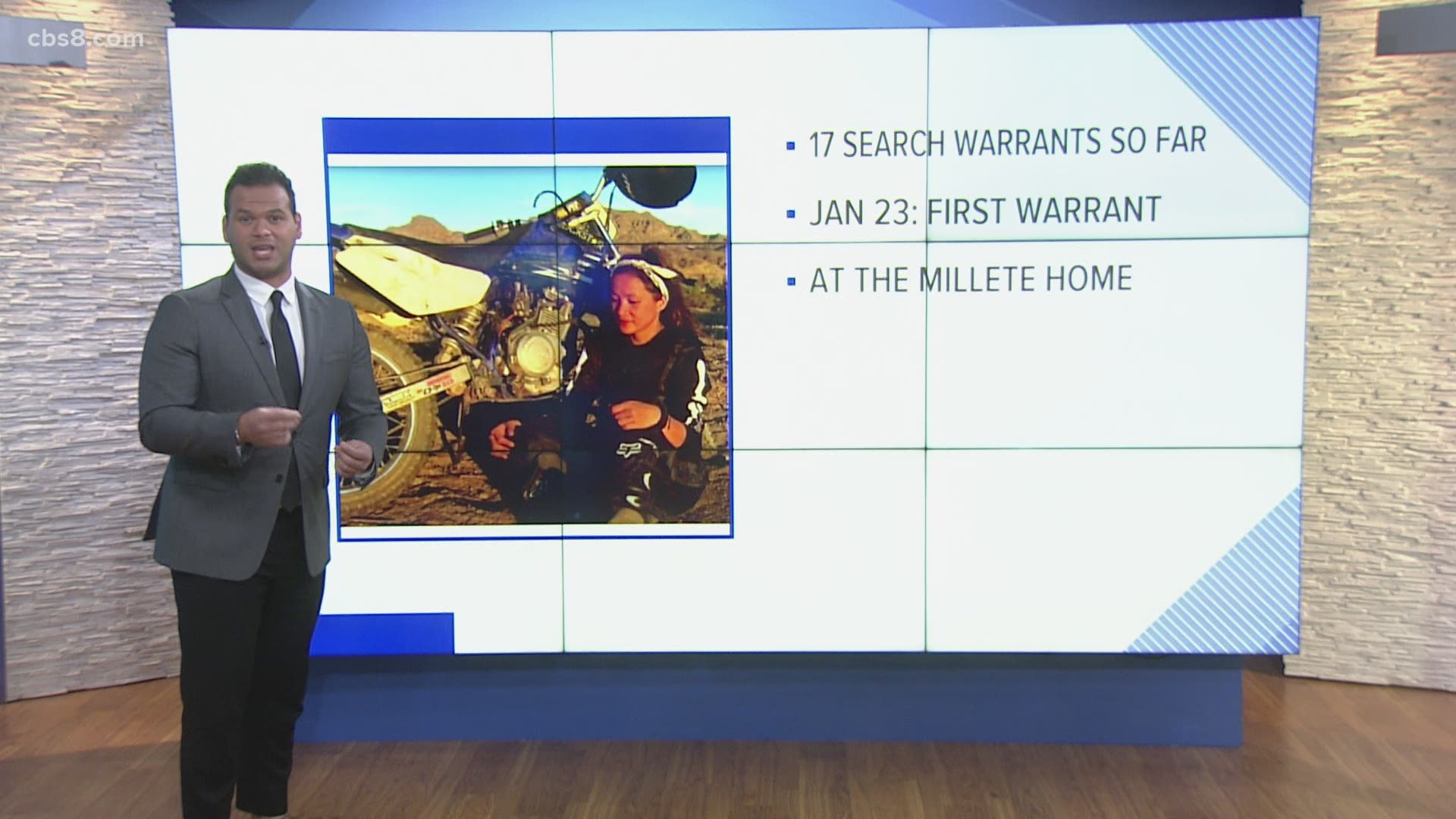 The Chula Vista Police Department and multiple federal agencies, including the FBI, are looking into her disappearance.

So much has unfolded in this case, with updates happening frequently from the family, law enforcement and news media.

But in order to get to the bottom of what happened, we have to look at where things started from day one. Here is a timeline of everything we know in the disappearance of Maya Millete.

That Thursday was the first day Millete went missing. It was later found out, through security camera footage, that loud bangs sounding like gunshots rang through the neighborhood.

It was also later reported that Maya made an appointment with a divorce attorney on the seventh. Larry made statements to police and media that he and Maya had a fight that night.

January 8 -- Larry Millete goes to the beach for 12 hours

The next day Larry, Millete's husband, was nowhere to be found for 12 hours. He told family members that he went to the beach with his four-year-old son.

He said he took the Lexus SUV the family owns, with the license plate that spells "MAYLANI".

He reportedly left his phone behind when he left for the beach.

On Sunday, Maya's family visited the house and spoke with Larry Millete. A photo was taken of him standing in the living room.

The family noted the garage smelled like bleach and there were bathmats hanging over the trash cans drying out.

Maya was officially reported missing to Chula Vista Police on this day.

The day after Maya was reported missing, police entered her home and began their investigation.

Maya was reportedly an avid hiker, so that's where the search parties went.

"There were a couple of red flags," said Maya's brother-in-law that morning. He was speaking to anything that could have led to her disappearance.

"I would like to thank all the volunteers, Chula Vista Police Department, Navy and Media for assisting us and in the search for Maya. We are truly grateful."

On January 19, a GoFundMe was set up to help pool resources in the search for Maya Millete.

On Saturday, two weeks after Maya's disappearance, Chula Vista Police executed their first search warrant of the family's home late in the evening.

Police did not immediately reveal what was seized during their search. It was later reported that officers took the family's black, Lexus SUV. This was the same one Larry reportedly took the day after Maya was last seen.

Larry Millete told News 8 that investigators took the property before leaving at one in the morning on January 24.

From late morning to the early afternoon, supporters gathered in front of the Chula Vista Police Department Headquarters.

The rally fell nearly one month since the Chula Vista mother went missing.

Larry Millete, who previously cooperated with law enforcement, was no longer aiding in the investigation and search efforts. The family said it "hurt and surprised them at the same time."

On April 1, Chula Vista Police executed a search warrant on the aunt and uncle of Larry Millete, the husband of Maya, who was missing at the time for nearly three months.

Investigators seized guns and other evidence from the home which is located in the 7100 block of Viewcrest Drive, within San Diego City Limits.

A half dozen long rifles and boxes containing other evidence were seized.

The couple's names are Ricky Lincoln and Kathy Lincoln. Kathy is the blood-relative to Larry.

The two did not respond to News 8 requests for comment and have not been named suspects in the disappearance of Maya.

More than a hundred volunteers took to the county's backcountry north of Jacumba Hot Springs on April 17.

Family and friend went off-road through the Anza Borrego Desert near the Hollywood-Vine Campsite.

“They’ll be searching there in the area and around the mud cave area. They just need all the help that they can get,” said Liliana Burke, who runs Maya Millete’s Search Warriors page on Facebook.

April 21 -- the search grows into a national investigation

Chula Vista Police started to work with the FBI, the San Diego County District Attorney's Office and the Naval Criminal Investigative Service, according to an investigation update posted on the CVPD Facebook page.

This was the latest of more than 20 search warrants written in connection with this case, and the second search of the Millete home in the San Miguel Ranch neighborhood.

Police searched a vehicle on the property and a police dog was seen entering the home as well.

"We're trying to maintain the integrity of the investigation," Lt. Frank Giaime said, when pressed about any specific details of the search warrant.

Detectives arrived with the investigative court order in hand at the Millete at about 4:30 p.m., according to the Chula Vista Police Department.

CVPD spokesman Lt. Frank Giaime declined to disclose what prompted the new search of the woman's residence in the 2400 block of Paseo Los Gatos, near Mount San Miguel Park in the eastern reaches of the South Bay city.

Neighbors tell News 8 that police arrived at the Millete home dressed in full tactical gear. The garage was closed off at 6:17 p.m.

For now, Larry is not a suspect in the case nor a person of interest. The case of Maya Millete is not a criminal investigation and still a missing persons case.

56 people have been interviewed in this case and police have received more than 55 tips.

Investigators have not publicly named any persons of interest or suspects in the case.  If you have any information on the Maya Millete missing person case, contact Chula Vista Police.

WATCH: Surveillance camera records sounds of loud bangs in the Millete neighborhood and, later, audio that sounds like children playing in the backyard.  Police serve a search warrant on Larry Millete's home.