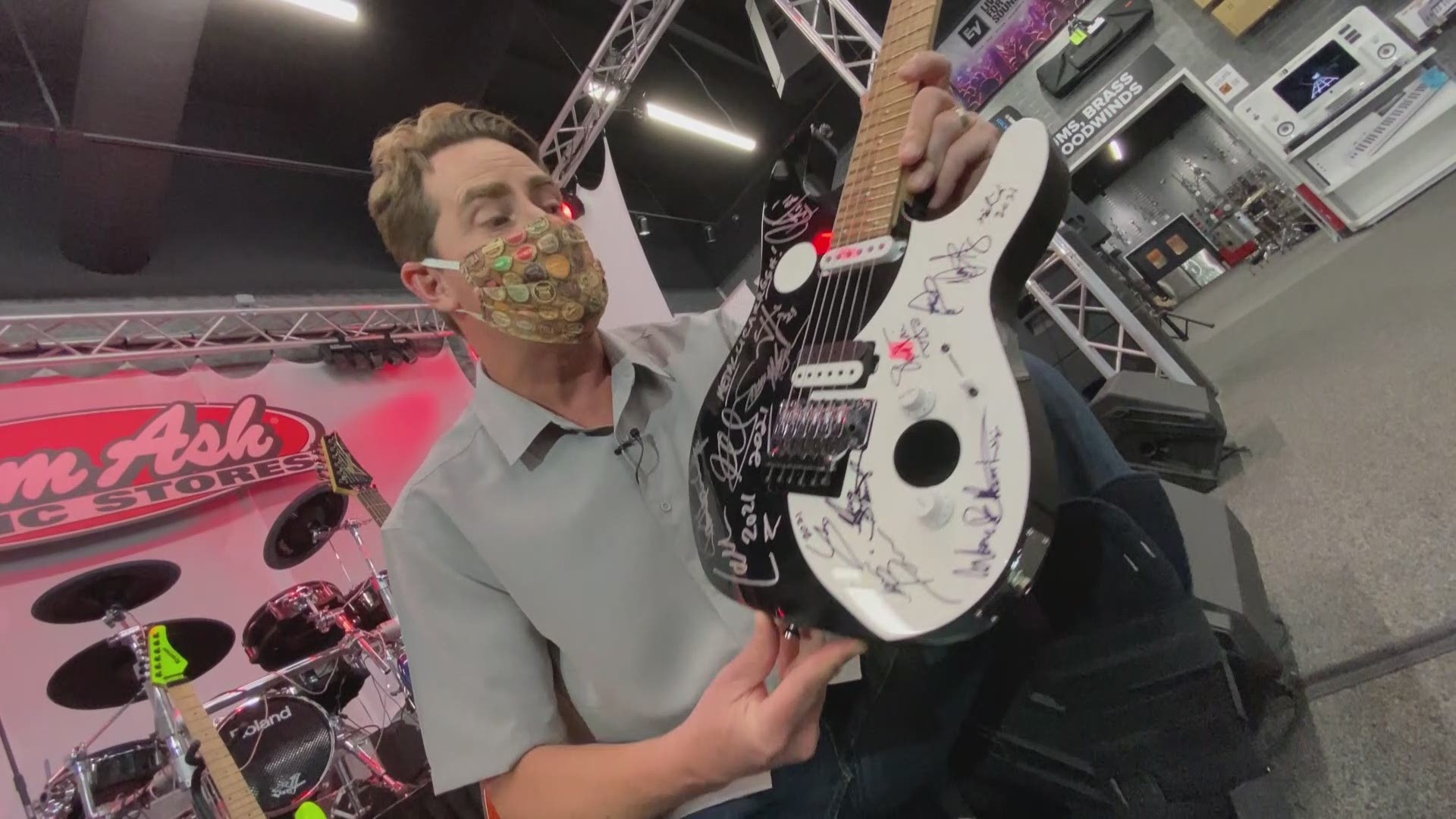 SAN DIEGO — A San Diego man is gathering the biggest rock stars in the world to raise money for a good cause. In this Zevely Zone, I visited the Sam Ash Music Store at College Grove Shopping Center to view what may be the greatest collection of rock guitars ever. To understand why METALLICA, Steve Vai, Joe Satriani, Steve Lukather and many other musicians would join a fundraiser of this magnitude, you must first learn about the story of Jason Becker. His story is one of brilliance, talent, determination, adversity, and, ultimately, triumph. Jason was a child prodigy on guitar, who rose to prominence and got a gig with David Lee Roth.

In 1989, Jason had just completed an album with David Lee Roth when a funny feeling in his leg led to the first tragic step toward ALS, also known as Lou Gehrig's disease. Jason lost the ability to play guitar, walk, talk, and breathe on his own. But he never lost his will to live or his desire to create music. In 1996, Eddie Van Halen visited Jason and donated a guitar to Jason that still hangs on his wall. That act of kindness from the greatest rock guitarist of our generation helped kick off an incredible movement. Van Halen not only played for Jason but gave him a kiss and gently stroked his hair. "Did you cry?" asked Stephen Correa who showed me the video of their meeting.  Truth is, I did cry. The video is beautiful.

Jason was 20-years old when he was diagnosed with ALS. He is now 52. "It breaks my heart. Imagine having your whole life in front of you. You are one of the best in the world and it's taken away," said Stephen who grew up idolizing the prodigy.  Stephen is now friends with Jason Becker and trying to help him financially with medical bills and other needs. "Jason would be one of the most important guitar players in the world period, it's not even open to debate any person up this stage would tell you that," said Stephen.

On that stage are guitars donated by some of the greatest legends in rock. Jason then showed me a video of Paul Stanley from KISS. "Hey, Paul Stanley here and let's talk about Jason Becker, he inspired a lot of you his fire was catchy," said Stanley in the video. Paul Stanley promised to autograph this guitar for whoever bought it. I held the guitar as the Sam Ash Music Store when I met Jason. "He signed right there," I said. Jason smiled and said, "Yep. That's his signature."

The fundraiser is powered a lot by word of mouth. Sam Ash Music Stores heard about the fundraiser and donated a guitar as well that Jason will sign with his fingerprint. All the proceeds go to Jason who lives in the Bay area. "I don't make anything, I don't make a dime," said Stephen. None of them do and $ 200,000 has been raised so far.  Jason showed me the guitars that are being sold for the good cause. "Sammy Hagar, Steve Lukather from Toto," said Jason. The entire METALICA band signed two of the guitars.

Jason Becker has inspired of the rock legends far beyond the music with his courage and strength. Doctors gave Jason five years to live and that was in 1989!

"He is my friend," said Stephen. "How do you not? If you have the time and the resources, you can't just walk by it. You got to help. It's Jason Becker." Stephen told us that he could not volunteer his time without the generous help from Herman Li and Collen Gray who helps with Jason's website. There is an upcoming auction for some of the guitars in New York at Guernsey's Auction.

On Jason Becker's website, Jason left this statement: "I am so grateful for all the love and support everyone has given to me and my family. As far as selling my guitars being sad, and that I shouldn't have to do it, I just want you to know that isn't how I feel. It makes me happy to see others playing my music. I feel good about passing on my guitars, thinking they mean something to others. I can't play them now, but other folks can. That's a good thing. And I want myself and my family not to have to worry about money, if possible. Thank you for all the love, I send it right back to you."