Latino voters to be largest minority voting group in 2020 election

The percentage of Latino voters has grown significantly since 2000 when they represented just 7% of voters while Black voters represented 12%. 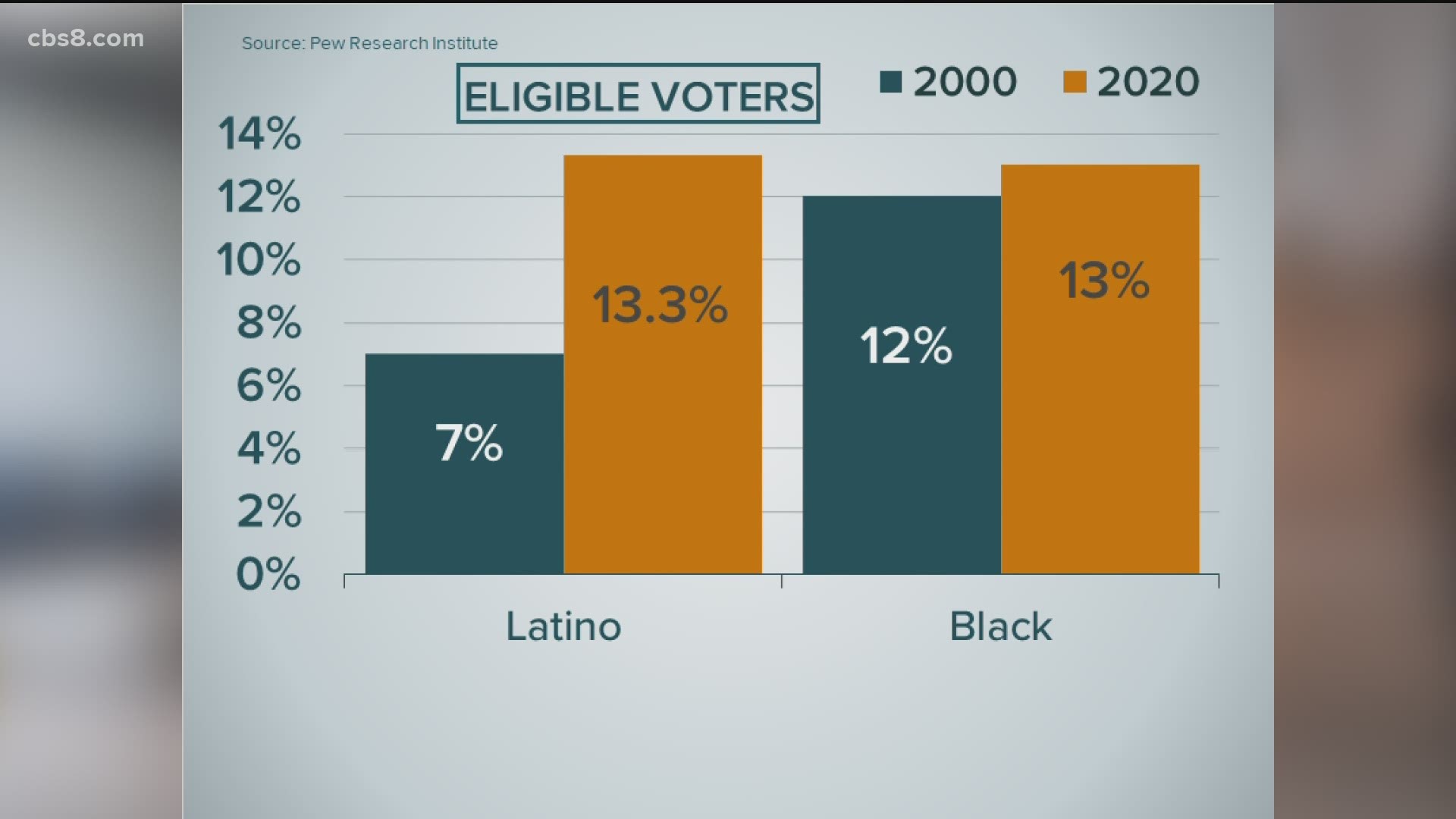 SAN DIEGO COUNTY, Calif. — The 2020 Presidential Election will be the first where Latinos are the largest minority group of eligible voters. Pew Research Institute projects Latinos will represent 13.3% of eligible voters, surpassing Black voters who will make up 13%.

The percentage of Latino voters has grown significantly since 2000 when they represented just 7% of voters while Black voters represented 12%.

California is home to the largest contingent of Latino voters in the U.S. with 7.9 million Latinos aged 18 or older who can vote. In some congressional districts, such as the 51st district, which stretches the length of the U.S.-Mexico border in California, Latinos make up 61% of the population.

“I think it's really important. It's going to influence California in the election this November. So, we want to empower Hispanic people to go out there and vote so we can have the services and help our community,” said Teresa Goodman, a member of the Alliance of Californians for Community Empowerment.

Historically, political experts have found Latino and Hispanic voters are less likely than white voters to cast a ballot.

“They don't have the time because they work. They're providing for their families. They're taking care of their families. Some of them, they don't even have transportation,” said Goodman, who helps residents overcome obstacles to vote.

Many candidates have done outreach in Latino communities throughout San Diego. While the pandemic response remains top of mind for voters, the issues surrounding it, such as health care, income inequality, and job growth have become a focal point for Latinos.

In San Diego, 62% of people who have tested positive for coronavirus identify as Hispanic or Latino. County Health and Human Services estimates the rate of coronavirus at 2,422.8 per 100,000 Latino/Hispanic residents compared to 716.6 per 100,000 white residents. Latinos also work in industries most likely to be affected by the economic fallout of the pandemic. A study released Thursday by the San Diego Association of Governments found half of Latino workers who lost their jobs in the last six months worked in tourism.

Nationwide, more Latino voters are registered Democrats than Republicans. However, researchers say a candidate’s stance on certain key issues, such as abortion or immigration, could sway voters, especially Independents or those registered as No Party Preference. Cuban-Americans are also twice as likely to identify or lean Republican than Democrat.

“For a lot of Catholic Latino voters, in particular, it’s tough to make those choices because they have a lot of competing cross pressure there,” said Jason Casellas, a professor at the University of Houston, who researches Latino politics. “Republicans shouldn't alleviate and write off the Latino vote. At the same time, Democrats should not take the Latino vote for granted.”